Under Global NCAP's old testing protocol, the Swift had secured a 2-star safety rating in 2018. 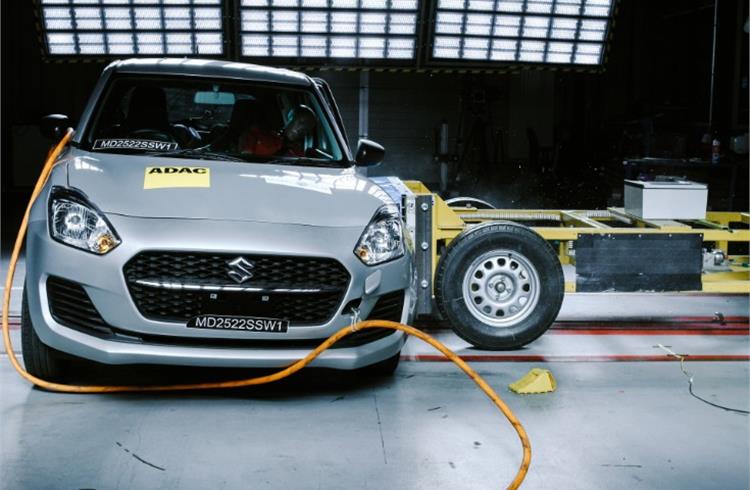 Global NCAP has tested the Maruti Suzuki Swift once again, but this time around it has come away with a rather poor 1-star rating for both adult and child occupant protection. The Maruti Swift – along with the Ignis, S Presso and the Mahindra Scorpio N – was among the second lot of cars to be tested under Global NCAP’s more stringent protocols that came into effect in July this year.

The model tested was manufactured in India for the domestic market and came equipped with dual front airbags, seat belt pretensioners, rear ISOFIX anchorages and seat belt reminders. The current-gen Swift was previously tested by GNCAP in 2018 in its pre-facelift guise where it scored 2 stars for both adult and child occupant protection.

Notably, these ratings are also applicable for the Dzire compact sedan as both are underpinned by the same platform, and are sibling models.

GNCAP also noted that the footwell area as well as the bodyshell were unstable, and were not capable of withstanding any further loadings. Notably, these findings are not very different from the previous crash tests of the Swift. The 2018 pre-facelift Swift also recorded high compression to the driver’s chest, an unstable structure and poor protection in the footwell area.

Global NCAP’s new testing protocols also requires cars to be tested for side pole impact test. However, the same was not performed on the Swift as it does not get side head protection, even as an option. The Swift also does not come with Electronic Stability Control as standard, which is why it was not tested for safety assist systems either. Lastly, it also does not comply with UN127 or GTR9 pedestrian protection norms.

Child occupant crash test
When it comes to child occupant protection, the Swift scored 16.68 points out of a possible 49. This includes a dynamic score of 12.82 points and CRS (child restrain system) installation score of 3.86 points.

The Swift comes with standard ISOFIX anchorages only for the two outboard rear seats, but misses out for the front passenger seat. It also does not get a three-point seat belt for the rear passenger seated in the middle.

Old and new crash test scores
Global NCAP’s new protocols take a lot more factors into account while crash testing a car such as mandatory compliance with pedestrian protection norms, standard fitment of ESC, side impact test, more stringent evaluation of chest load readings on the crash test dummies and also side impact test for the child dummies. Previously, GNCAP’s assessment was only based on a single frontal offset crash test.

Therefore, the Swift’s new score is not directly comparable with the old score, however, with no upgrades to active or passive safety features, the Swift naturally does not meet most of the newer stringent norms. This explains why the Swift’s safety rating has gone down from a previous 2 stars to a 1-star rating now.