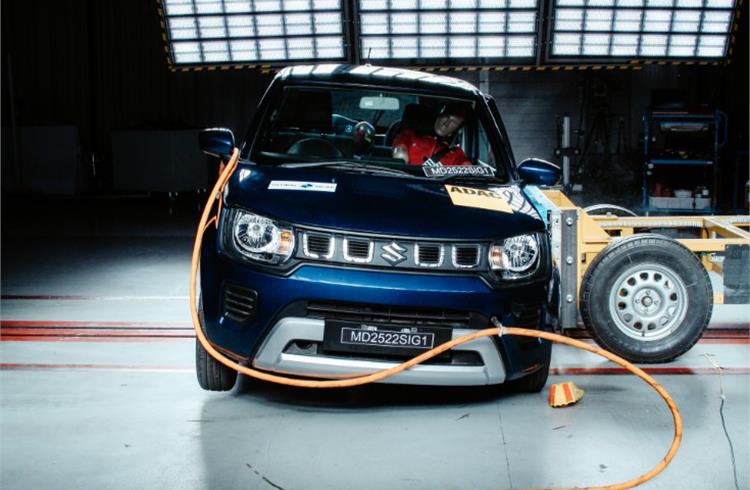 The testers also noted that the driver’s and passenger’s knees showed marginal protection as they could come in contact with dangerous structures behind the dashboard. Meanwhile, the Ignis’ body shell was rated as unstable and incapable of withstanding further loadings. However, it was not subjected to tests for side impact, safety assist systems or pedestrian protection.

Child occupant crash test
When it comes to child occupant protection, the Ignis scored 3.86 points out of a possible 49. The hatchback achieved a CRS (child restrain system) installation score of 3.86 points and zero points each for the dynamic score and vehicle assessment score. Global NCAP states that Maruti Suzuki refused to recommend CRS for the test, and therefore, dynamic points were not awarded.

The Ignis was tested with an 18-month-old and a 3-year-old child dummy, with the latter sitting in a rear facing child seat, and the former being a forward facing one. For both child dummies, the child seats were able to prevent head exposure, thereby offering good protection.

The Ignis gets ISOFIX anchorages as standard on the two outboard rear seats, and it also lacks a three-point seat belt for the rear middle passenger.

Price and rivals
Maruti Suzuki launched the Ignis back in 2017 and it received a facelift in 2020, when it also received a BS6-compliant 83hp, 1.2-litre petrol engine. With prices starting at Rs 5.35 lakh and going up to Rs 7.72 lakh, the Ignis competes with the likes of the Citroen C3 and the Tata Punch.