The India spec S Presso was previously tested in 2020 under the old protocols where it scored zero stars. 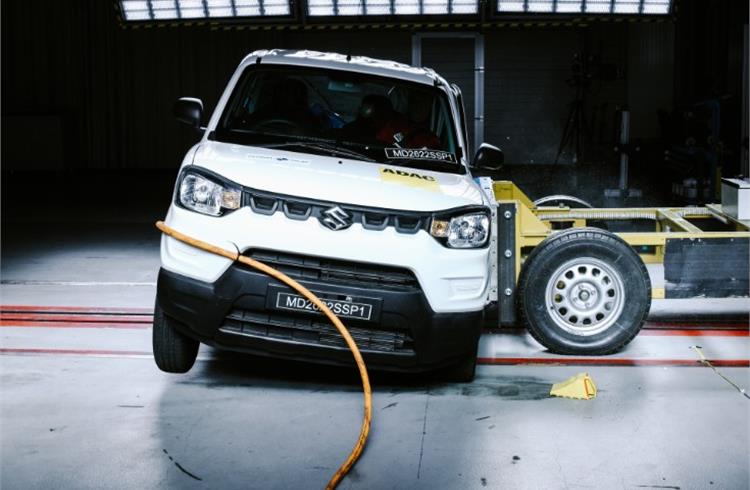 Adult occupant crash test
In the crash tests conducted under the new GNCAP protocols, the Maruti Suzuki S-Presso received a 1-star rating for adult occupant protection test, scoring 20.03 points out of a maximum of 34. This includes 8.19 points for frontal off-set impact and 11.9 points for the side deformable crash test, both out of a possible 17.

In the frontal impact test, the protection offered for the driver's and passenger’s heads was rated as 'good'. However, the testers noted that the driver’s chest offered poor protection and that is where major points were lost. For the passenger’s chest, on the other hand, the S Presso offered marginal protection.

The side crash test is compulsory in the new GNCAP norms and here the S-Presso showed marginal protection for the driver’s head and chest, but the abdomen and pelvis protection was rated as good.

A pole-impact test, also a part of the new protocol, was not conducted on the hatchback, since it does not have any form of side head protection, even as an option.The S-Presso also doesn't get Electronic Stability Control as standard, and hence, it was not tested for safety assist systems. Moreover, it does not comply with UN127 or GTR9 pedestrian protection norms either.

Child occupant crash test results
For child occupant protection, it was awarded just 3.52 points out of a possible 49. The poor score was mainly due to the S Presso not offering ISOFIX anchorage points for child and booster seats.

The front-facing child seat for the three-year-old dummy was installed using an adult seatbelt. Testers noted that it was not able to prevent forward head movement beyond permissible limits. The rearward facing child seat for the 18-month-old dummy was able to prevent head exposure in frontal impact, offering good protection for the head but poor protection to the chest.

Old vs new crash test results
This is not the first time that the S-Presso has been tested by GNCAP. The hatchback, fitted with only a driver-side airbag, was tested in November 2020, where it scored a 0-star rating for adult occupant protection and two stars for child occupant protection.

The previous test results cannot be compared directly with the new one, as the whole process has been overhauled under the new protocols. However, it is interesting to note that the S-Presso has secured one star under the new, more stringent protocols, up from zero in the previous test. But it must be noted that the S-Presso tested now also gets more standard safety equipment like dual airbags, compared to the model tested in 2020.