Launched on January 22, 2020, Tata Motors’ premium hatchback with 1.2 petrol and 1.5 diesel engines, is currently averaging monthly sales of 5,050 units. A CNG variant is slated to be launched later this year. 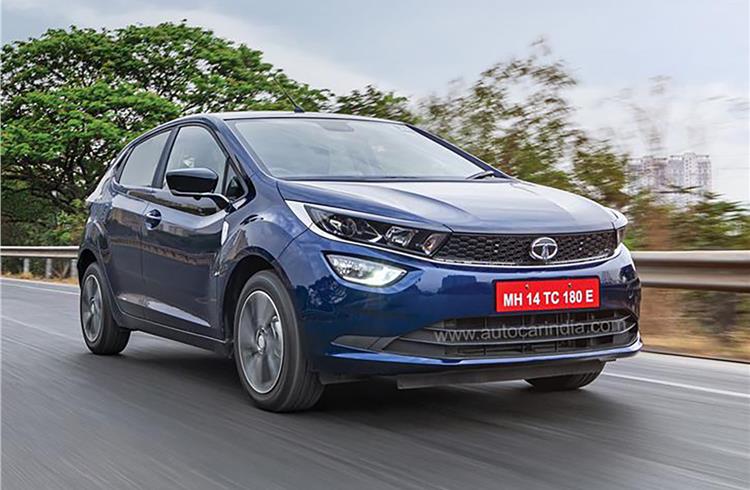 The Tata Altroz, Tata Motors’ premium hatchback launched on January 22, 2020, completes three years in the Indian passenger car market today. Since launch through to end-December 2022, the Altroz is estimated to have sold 176,596 units in the domestic market (see data table below). 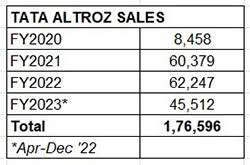 Proof that the car has seen sustained demand lies in the numbers. Despite FY2021 being a pandemic-impacted year, the Altroz sold 60,379 units and 62,247 units in FY2022. In the current fiscal, the Altroz is estimated to have sold 45,512 units between April-December 2022, with three months left to close FY2023. This translates into average monthly sale of 5,056 units.

The Altroz, which is the first Tata car to use the ALFA (Agile Light Flexible Advanced) architecture, was the 36th made-in-India car to be crash-tested by Global NCAP and became the company’s second – after the Tata Nexon – and India’s second GNCAP five-star rated car.

New DCA and upcoming CNG variant to rev up sales

In March 2022, in an effort to rev up sales and to cater to growing demand for automatic transmission-equipped cars, Tata Motors launched the Altroz DCA, equipped with a dual-clutch transmission from Punch Powertrain. The Altroz DCA is priced at Rs 809,900 (ex-showroom), which is a premium of Rs 107,000 for its DCA transmission over the similar-spec trim with the standard five-speed manual gearbox.

More recently, at the Auto Expo 2023 held earlier this month in New Delhi, Tata Motors unveiled the Altroz CNG along with Punch CNG compact SUV. Both vehicles will use the 1.2-litre, three-cylinder unit that develops 77hp in CNG mode. They also get the new dual-cylinder CNG setup – twin CNG cylinders, each 30 litres in capacity, have been positioned under the boot floor to free up storage space. When it is launched later this year, the Altroz CNG will become the third CNG-powered model in its segment, along with the Maruti Baleno and the Toyota Glanza. 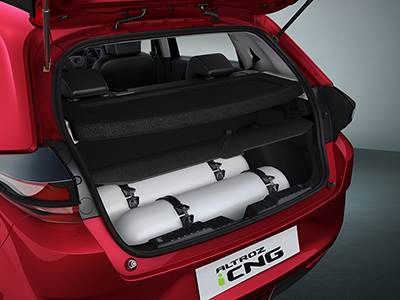 Twin CNG cylinders, each 30 litres in capacity, positioned under the boot floor to free up storage space in the Altroz.

Tata Motors has managed to tackle the issue of low boot space, which plagues the Tiago and Tigor CNG. The Altroz CNG gets a new dual-cylinder setup, splitting the otherwise large 60-litre tank that would take up nearly all boot space. The new twin cylinders, each 30 litres in capacity, have been positioned under the boot floor to free up storage space.

Tata on track to cross half-a-million sales in FY2023
The Altroz, which is part of Tata Motors’ ‘New Forever’ range along with the Tiago, Tigor, Nexon, Harrier and Safari, has been part of the company’s accelerated growth drive over the past three years. Tata Motors, which achieved its best-ever annual sales in CY2022 with 526,798 PVs including 8% EVs, has clocked total wholesales of 408,097 units, up 64% YoY (April-December 2021: 249,249 units) in the first nine months of the ongoing fiscal year 2023.

With the Altroz maintaining its momentum and deliveries of the Tiago EV to begin later this month, Tata Motors could well cross the 50,000-unit monthly sales mark for the first time in January or February. Tata Motors is also well on track to achieve its targeted sales of 500,000 units including 50,000 EVs in the ongoing fiscal year.