These five models, which represent the compact, midsize and multi-purpose vehicle categories within the overall utility vehicle segment, are riding a continuing wave of surging demand. 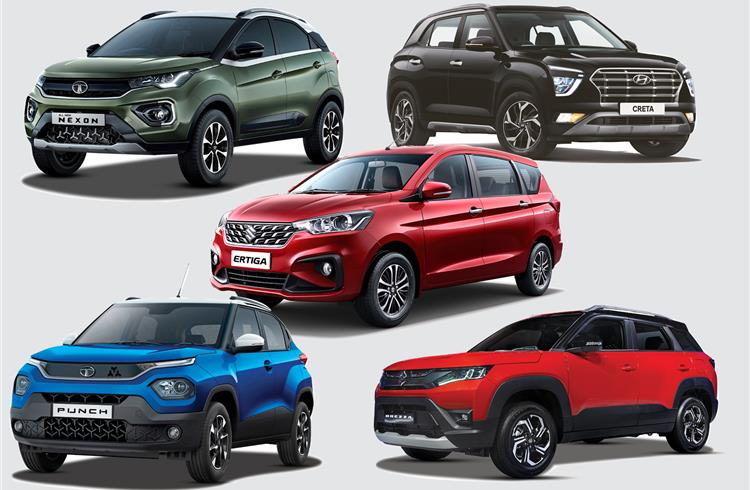 If the passenger vehicle industry is setting the pace for India Auto Inc with strong double-digit growth of 30%, then it’s thanks to the surging demand for utility vehicles (UVs), whose sales have crossed the million mark for the third consecutive year. In the ongoing FY2023, this big number has come about in just the first seven months of the fiscal.

Of the movers and shakers in the UV business, the top five models – the Tata Nexon, Hyundai Creta, Maruti Ertiga, Tata Punch and Maruti Brezza – have set a scorching pace and are en route to setting individual sales records for themselves in FY2023.

With eight months – April-November 2022 – of FY2023 completed, a close look at their market dominance reveals some interesting takeaways, particularly when it comes to number-crunching sales in the domestic market.

The Tata Nexon is the topper in both November 2022 (15,871 units) as well as April-November (115,835 units). The Nexon, which is available in petrol, diesel and electric, is India’s best-selling UV having dethroned the Hyundai Creta in FY2022.

The midsize Creta, with 13,321 units last month and cumulative 100,683 units for April-November, is fighting back and is hard on the heels of the Nexon. The popular Maruti Ertiga MPV though beat it to second place in the monthly rankings with 13,818 units but remains No. 3 on the cumulative front with 90,197 units.

The Tata Punch, the youngest of this bunch and launched in October 2021, is just 14 months old in the domestic market but is firing on all cylinders: cumulative sales of 141,880 units means it has averaged 19,134 units a month. Not only is the Punch a regular in the Top 5 UV chart but it has already gone ahead of many well-established models.

Top 5-pack packs 3 million units and counting
Further number-crunching of India’s five best-selling UVs in the ongoing fiscal reveals that their cumulative sales have gone past the 3-million mark: 30,55,484 units.

The two Tata Motors SUVs – the Nexon and Punch – together account for 18.76% of the cumulative Top 5 UV sales, very commendable considering the Nexon rolled out only in FY2018 and the Punch in FY2022.

It is only fitting that these five models also represent three UV sub-segments – compact, midsize and multi-purpose. Given the huge demand for compact SUVs, it’s not surprising that three models – Brezza, Nexon and Punch – belong to this sub-segment, while the Creta and Ertiga remain hugely popular in the midsize and MPV categories respectively.

With four months left to go in the fiscal year, and most rivals many thousands of units away from their numbers, these Top five should easily maintain their status in FY2023 albeit their individual rankings just might change, given the stiff competition in the UV segment. Of course, it also depends on market availability as the chip supply woes keep rearing their head. Stay tuned for more updates.