Even as the Maruti Vitara Brezza regained its crown it lost to the Hyundai Creta in May 2019, it faces threats from new challengers like the Venue as Hyundai ramps up production to convert the large number of bookings into sales. 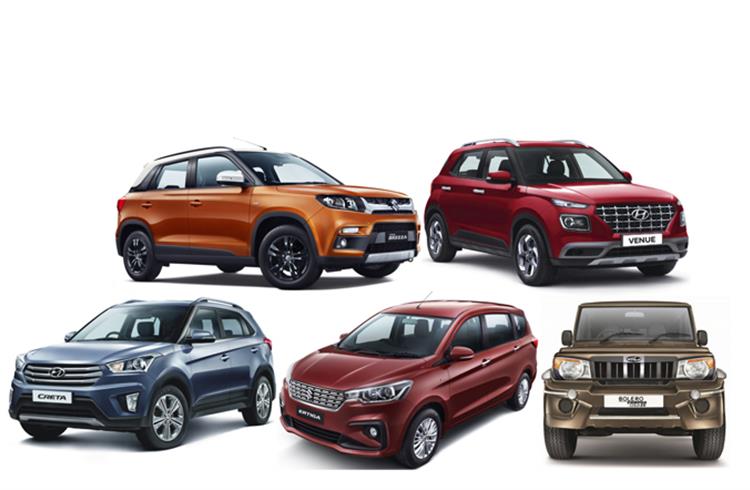 SUVs are making news and how. From the soon-to-be-launched Kia Seltos to the recently launched MG Hector, new UV players seem to be having a 'problem' of plenty. While that could spell good news for an industry beleaguered by poor market and consumer sentiment and hitting the negative sales zone for the ninth month in a row, it remains to be seen if a large percentage of the bookings stand converted into purchases.

In May 2019, the Hyundai Creta had toppled the UV market leader Maruti Vitara Brezza for the second time in a year but the Vitara Brezza has bounced back in June to regain the crown with 8,871 units. However, with increasing competition and no petrol engine option yet in a market seeing a strong shift from diesel to petrol, the Brezza's dipping month-on-month numbers might just allow a new challenger to claim the top spot.

Buyers check in to new Venue
There's a brand-new No. 2 in the UV best-sellers chart – the Hyundai Venue. The Venue, Hyundai's first compact SUV, debuted in the Top 5 UV charts in the very month of its launch, in fourth place with 7,049 units in May 2019. in June, it has jumped two ranks with 8,763 units, narrowing missing the No. 1 position by 108 units.

Considering the Korean carmaker had 33,000 bookings within a month of the SUV's launch and more would been received since then (the company says over 200,000 potential buyers have evinced interest in the Venue), it would not be wrong a hazard a guess that it won't be long before the Venue crosses the slowing Brezza (which is 21% down in Q1 FY2020 YoY)  as Hyundai ensures its dealers across the country are well stocked.

Don't discount Kia, the other Korean brand from the Hyundai Group, either. The snazzy Seltos just might spring a surprise in August and beyond. As is known, the best-selling chart comprises wholesale numbers and not retail and manufacturers will be doing their best to stock dealerships with the latest models to draw consumers, who have proved to be rather elusive in the past 9-odd months.

The Creta has been a runaway hit since its launch in 2015. In fact, such has been the appeal of the Creta over the years that there hasn't been a major dip in sales despite several price increments. It has long been the midsized SUV to beat and the arrival of new rivals hasn’t managed to dent the Creta’s popularity either. But the Kia Seltos, to be launched on August 22, could be a strong challenger. Kia and Hyundai are sister brands under Hyundai Motor Company but operate as independent entities and are fierce rivals in the markets they operate in. With the Kia Seltos receiving 6,016 bookings on day one,

Ertiga drops to fourth place from No. 2 in May
The Maruti Ertiga MPV is fourth in the list of Top 5 best-sellers in June. With 7,567 units to its credit, it has dropped from No 2 position it had in May with 8,864 units, With a modern design, ample space, thoughtful features and a value-for-money package, the new Ertiga is ticking most of the right boxes for family and fleet buyers. Of the total 24,518 Ertigas delivered in Q1 FY2020, 49 percent are diesel and the rest petrol variants.

Bolero braves it out
Wrapping up the Top 5 best-sellers' chart is the warhorse from Mahindra & Mahindra – the Bolero which, being true to its tough credentials, has been soldiering along with a never-say-die attitude. The Bolero sold 5,118 units in June, comprising 4,210 units of the Bolero and 908 Bolero Plus. The dip in rural demand has meant that in Q1 FY2020, its cumulative total of 16,375 units is 28.43 percent down on Q1 FY2019 sales of 22,882 units.

Growth outlook
Apex industry body SIAM and all automakers were hopeful of the industry getting some relief in form of a GST reduction and possibly a vehicle scrappage policy from the Union Budget 2019. But their hopes were dashed, with the focus remaining firmly plugged into electric mobility and EV makers and EV ecosystem benefiting from the fiscal exercise.

What, however, lends hope to OEMs and the UV industry is the strong market response to recently launched or unveiled products like the MG Hector, Hyundai Venue and the Kia Seltos. Or for that matter, the all-electric Hyundai Kona.

With the monsoon playing hide and seek across India, rural markets are unlikely to see a revival soon. But, according to automobile dealer body FADA the PV industry is better off than the CV and two-wheeler segments.

The retail body says that PV manufacturers continued to reduce wholesale billing to dealers as well as regulated production in June, which helped dealers to address their high inventory levels. With the trend continuing for a couple of more weeks, inventory in PVs will, for the first time since the downturn began, come down to healthy levels of around four weeks across many markets and will be at the FADA-recommended level of 21 days or three weeks, which will help dealers in managing their viability and profitability better.

Overall, it looks like OEMs will be looking to ride out the monsoon season as well as Q2 FY2020 (July-September 2019), doing their best to improve sales and reduce inventory level. They will, of course, be banking upon the festive season of Diwali in October to light up India Auto Inc's sales and maybe even provide a few firecrackers.