Having improved its monthly numbers, the Activa with 236,739 units falls a tad short of the crown. 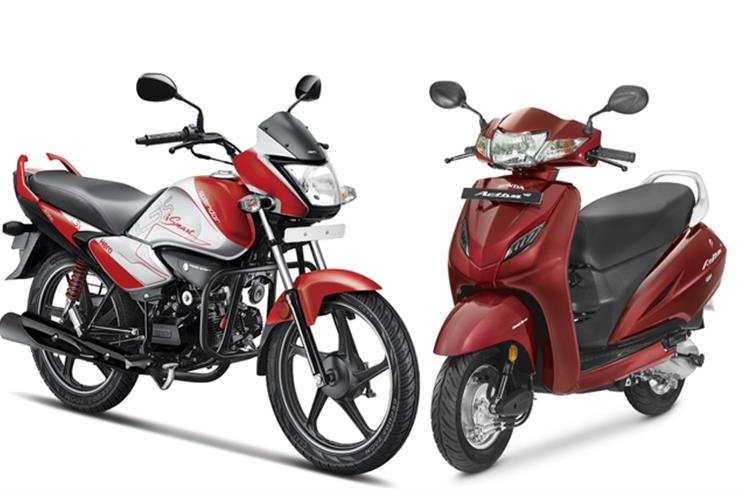 The holds-no-barred battle between Hero and Honda, between motorcycle and scooter, but on two wheels only, continues between the Splendor and the Activa, both highest sellers in their respective segments.  While the two have regularly traded places at the top, in June the two were separated by barely 6,004 units.

The Hero HF Deluxe maintains its No. 3 position with despatches of 193,194 units, bettering its 183,255 units in May and 182,029 units of April 2019, indicating that the commuter bike is growing sales month on month, despite an overall downturn in the market.

Bajaj Auto enters the Top 10 chart with the Pulsar range at No. 5 and 83,008 units. Bajaj Auto, which was the biggest market share gainer in FY2019, will be looking to up the ante in the coming months. In Q1 FY2020, Bajaj Auto despatched a total of 610,936 motorcycles, which marks 2.81 percent year-on-year growth for the company.

At No. 6 is the Hero Glamour with 69,878 units , improving on its May 2019 tally of 69,379 units. The 124.7cc motorcycle was once a strong buy in the market but is in danger of losing its glamour. Expect Hero MotoCorp to come up with a new strategy designed to re-introduce some glamour into this executive commuter.

The Bajaj Platina, with 56,947 units, takes seventh place. The Platina, along with the CT100 and Discover, has been instrumental in driving Bajaj Auto's strong performance in FY2019 and also in the ongoing depressed market environment.

At No. 8 is the TVS Jupiter, the second-best-selling scooter in India after the Activa. In June 2019, the scooter sold a total of 56,254 units, similar to its May 2019 sales of 56,797 units. While the company must be happy that the numbers have not fallen in the depressed market, the Jupiter is not gaining speedier traction, remaining in the 50,000-60,000 unit monthly sales bracket.

On June 7, TVS launched two variants of the Jupiter ZX – drum and disc. While the drum-brake model has been priced at Rs 56,093, the front disc brake-equipped version costs Rs 58,645 (both prices, ex-showroom, Delhi). Both come equipped with TVS’ version of combined brakes, called SBT, as standard. The ZX variant now gets many new features, including an LED headlight and a digi-analogue instrument cluster.

Ninth place goes to the Hero Passion motorcycle with 56,143 units, 13,520 units less than the 69,663 units sold in May and a sizeable decline in monthly numbers.

Earlier this year, TVS Motor Co, the sole moped maker in India confirmed to Autocar Professional that it will make its mopeds BS VI compliant. Not surprising, considering that the company has sold a total of 7.65 million mopeds in India over a decade and remains the most affordable form of mobility on two wheels.