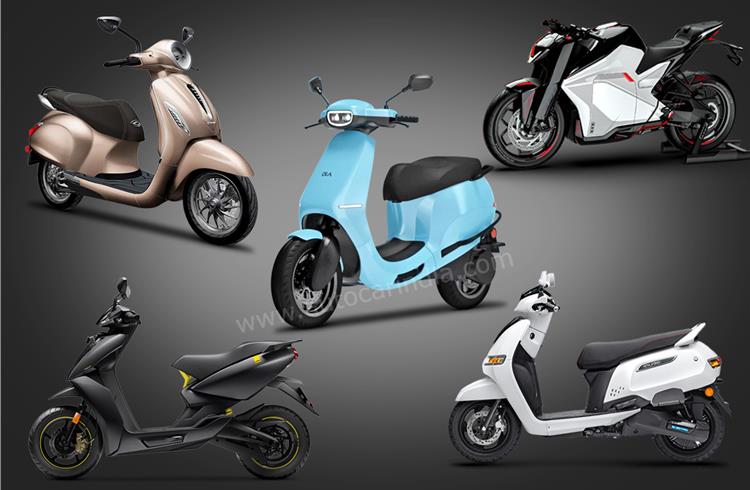 Proof that electric two-wheelers, the low-hanging fruit of the electric vehicle industry in India along with the three-wheeler segment, are on a roll is in the charged-up market sales. Autocar Professional’s analysis of the high-speed e-two-wheeler industry’s sales for the first 11 months of CY2021 (January-November) reveals that sales have surpassed the 100,000-unit mark for the first time.

Total sales from 25 EV OEMs (as exclusively detailed in the accompanying data table below) are 116,669 units. This constitutes a 355% year-on-year increase (CY2020: 25,598 units), albeit on a low-year ago total and a pandemic-impacted year.

Given the monthly average sales of 18,948 units for the September-November 2021 period, total industry sales for CY2021 should be in the region of 135,000 units, with December on and counting.

Hero Electric maintains leadership position
Market leader Hero Electric, which sold a record 7,102 units in November – its highest monthly tally yet – has chalked up total sales of 40,318 units between January and November. Do the math and it works out to 3,665 units a month or 120 Hero e-scooters sold for each day of the year till end-November. What’s more, its 11-month sales are a near-400% YoY increase (CY2020: 8,111 units)

This performance gives the company a market-leading share of 34.56%, thanks to offering a number of models including the popular Optima, Photon and Nyx across varying price-points. Its sizeable and expanding sales network is also helping the company stamp its presence -- over 700 sales and service outlets across the country – along with a widespread charging network and EV-trained roadside mechanics. It is also investing in expanding the EV charging network. Last month, it partnered Charzer, a Bangalore-based EV charging start-up, to set up 100,000 charging stations in a year, further standardising electric vehicle infrastructure between manufacturers.

To future-proof itself in terms of manufacturing capacity, Okinawa is investing between Rs 200-250 crore in a new plant at Bhiwadi, Rajasthan. The company aims to achieve 100 percent localisation by end-FY2022 and also plans to introduce an e-motorcycle too.

Fast-growing Bangalore-based Ather Energy has taken the third place in the Top 25 EV OEM list, unseating Ampere Vehicles. The smart e-scooter maker has sold 14,152 units in the first 11 months of this year. Despite having just two models on offer – Ather 450X and 450 Plus – the company has seen a smart uptick in demand. In addition to investing in its fast-charging network Ather Grid 2.0, the OEM is also working on a sub-Rs 100,000 affordable e-scooter, which is expected to bring in more numbers.

The top three players – Hero Electric, Okinawa and Ather – have together sold 78,369 units, accounting for 67% of the total sales. They are also the only ones among 25 OEMs to cross the 10,000 unit sales mark.

Pure EV jumps three ranks to be No. 4
IIT-Hyderabad incubated Pure EV and Greaves Cotton-owned Ampere Vehicles are at fourth and fifth rank respectively, clocking sales of 9,363 units and 9,155 units. Pure EV’s performance is noteworthy, given that it has jumped three ranks, moving up from seventh position in CY2020.

At No. 6 is TVS Motor Co with 4,068 units, albeit the tally could be more because November numbers are not in. TVS and Bajaj Auto (which is ranked No. 8 with 3,841 units), are the only ICE players which have diversified into EVs. Their numbers are still on the lower side but that can be put down to the fact both their products – the Bajaj Chetak and the TVS iQube – are currently available only in a few cities.

Is the industry headed for overcapacity?
Given the rapid pace of demand for electric two-wheelers, sales can only grow. The recent hike in the FAME II subsidy , wallet-busting prices of petrol (even after the Central excise duty cut on November 4, and over 20 states across India announcing EV-friendly policies, the scope and potential for these emission-free vehicles on two wheels is immense.

Understandably, EV makers are bullish about growth this year and beyond. While Hero Electric's Managing Director Naveen Munjal says EV sales are expected to hit the 30-million mark by 2030, Ather Energy’s CEO Tarun Mehta believes around 40 percent of petrol-engined scooter sales can be converted to electric scooters by 2025.

The EV buzz is in the news headlines too. Not a day passes without an announcement of new equity infusion, high number of claimed bookings or increased manufacturing capacity.

With new players like Ola with its S1 and S1 Pro smart scooter achieving more than 100,000 bookings, Simple Energy with more than 30,000 bookings, and Boom Motors having 25,000 bookings plus, EV sales in India are expected to grow substantially.

However, with most OEMs announcing manufacturing capacities running into millions of units and total industry sales at just 1% of total ICE two-wheeler sales of an estimated 16 million units, the million-dollar question is how real is the demand in the Indian electric two-wheeler industry and do the massive manufacturing capacity announcements in the recent past from multiple OEMs warrant it? Is the e-two-wheeler industry headed for overcapacity? What about the supply chain ecosystem and charging infrastructure? Nonetheless, both EV start-ups as well as established OEMs are optimistic the tide will shift in a bigger way towards e-mobility.