FY2022’s No. 3 utility player Tata Motors has taken No. 1 position in the April-June quarter with 87,943 units and 19% market share, ahead of Maruti Suzuki, Mahindra and Hyundai. 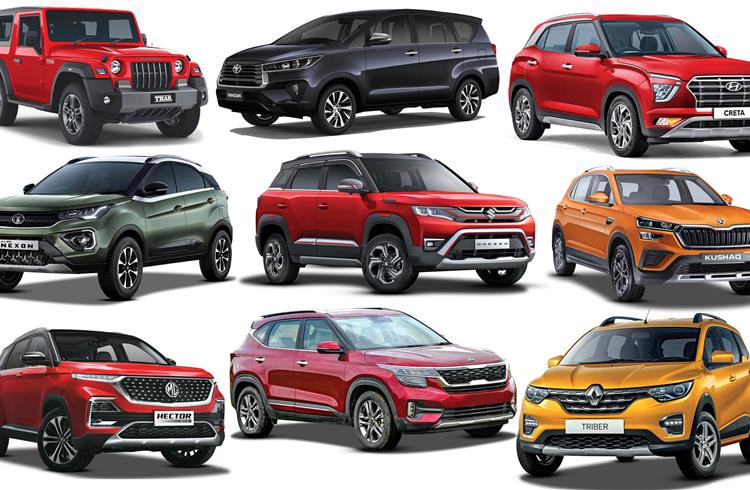 Tata Motors is on a roll and how. The company, which roared out of FY2022 with a sterling performance, has recorded sales of 131,940 passenger vehicles (PV) in the April-June 2022 quarter, up 103% on year-ago numbers. Powering this performance is its utility vehicle portfolio which has contributed 87,943 units or 66.65% of its PV sales in the first quarter of FY2023.

Tata Motors, as is known, is gunning for half-a-million PV sales this fiscal, with 10 percent of them being EVs. Its Q1 performance has laid the foundation for that score. 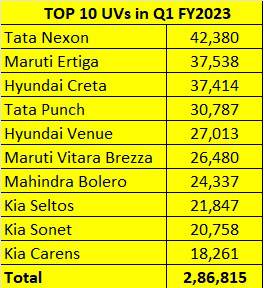 If Maruti’s numbers have slowed down, then that’s because of the production delays it has been facing due to the ongoing semiconductor supply chain issue, and also because it was readying to launch the new Brezza on June 30. The second-generation avatar of the game-changing concept SUV has all the makings of a winner, which should give Maruti a fresh charge. And it is has unveiled the all-new Grand Vitara today, having resurrected the brand. The Grand Vitara will be Maruti’s first full hybrid in India. Deliveries are expected to begin around the festive season. 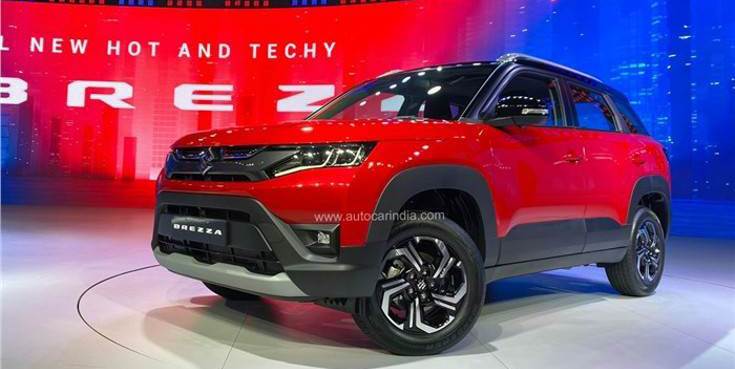 Recently launched new Brezza should give Maruti Suzuki a fresh charge in the fiscal.

The company, like other OEMs, is also witnessing challenges in the form of inadequate chip supplies and in early July had a backlog of over 143,000 cumulative bookings for four models – the XUV700, XUV300, Thar and the Bolero. Bookings for the recently launched Scorpio N will open on July 30.

The premium Alcazar is showing sustained demand and has averaged monthly sales of 2,113 units in the first quarter. The Kona, the sole electric Hyundai on offer in India, sold 293 units. 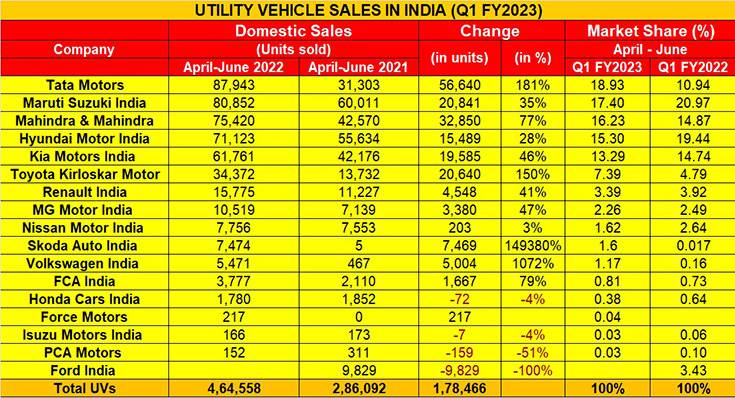 Growth outlook: Things can only get better
Look at the Q1 UV sales data table above and it's apparent that the surging demand for UVs in India is a democratising affair. The Top 12 OEMs in this list are all showing smart YoY growth and given that in Q1 FY2023, 51% of total PV sales comprised UVs – 464,558 units – keeping in line with the trend of every second car being sold in India is a utility vehicle, there is room for all given that what’s on offer ticks the right boxes.

Other than the top four UV OEMs in this list, Kia, Toyota, Renault, MG Motor, Nissan and the resurgent Skoda Auto India and Volkswagen India are all vying for a slice of the action and succeeding.

In FY2021, UV sales in India crossed a million units (or 10 lakh units) in a single year for the first time. In FY2022, the UV segment accounted for 48.51 percent of total PV sales. No surprise then that every vehicle manufacturer worth its wheels aims to expand its footprint in this booming segment. At present, there are 31 OEMs with UVs in India, selling approximately 101 models which cumulatively account for a staggering 666 variants available with a consumer-friendly mix of fuels, engines and transmissions.

Given the pent-up demand in the market, the sizeable order backlog for top players like Maruti Suzuki, Hyundai, Tata Motors and Mahindra, the easing of the supply chain and chip issues and a continued surging boom for SUVs, it looks like the Indian PV industry could be driving towards a record fiscal and even cross the 3.4-million-units mark. And, 50% or 1.7 million of them could be UVs, which means it UV makers would be looking to notch a record high this fiscal.