Having missed out on the top spot in FY2019 by a mere 696 units, Hyundai races past Ford in FY2020 with a strong Verna-driven export performance; Ford EcoSport remains most exported car. 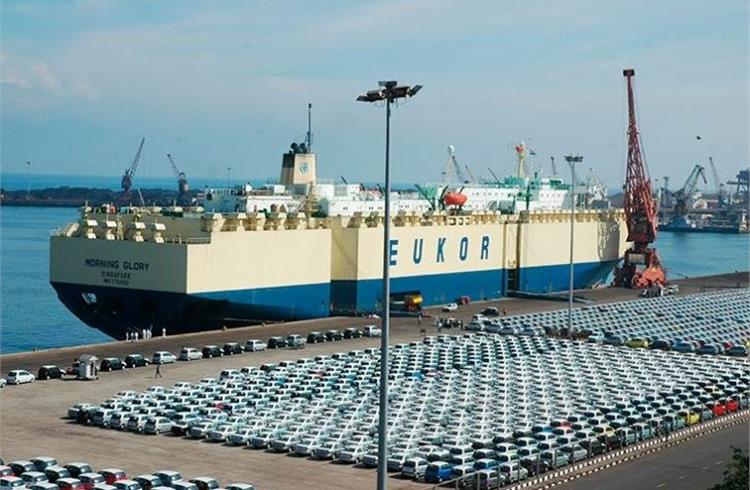 Hyundai Motor India has wrested back the passenger vehicle exporter crown it had lost to Ford India for two straight years. 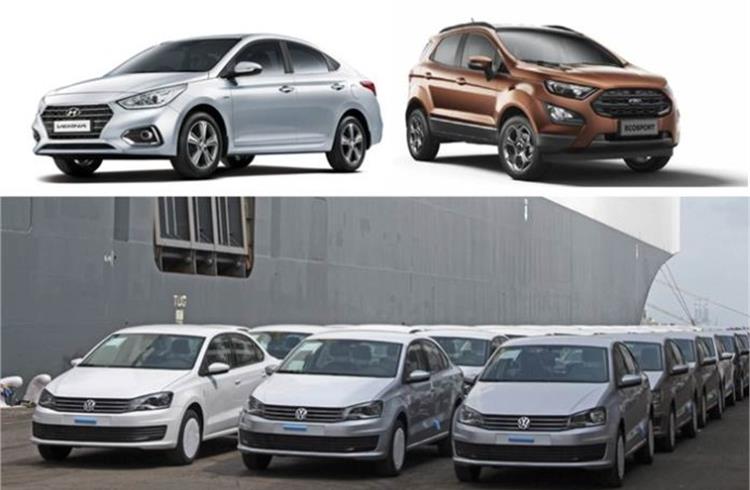 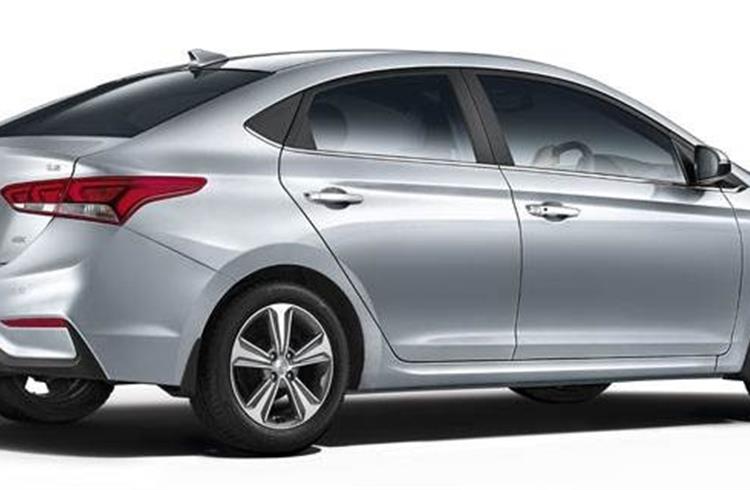 The Verna sedan, with 60,065 units (49% YoY growth), accounted for 35% of Hyundai's overall exports in FY2020 and is India's second-most exported model. Is seeing robust demand from the Middle East. 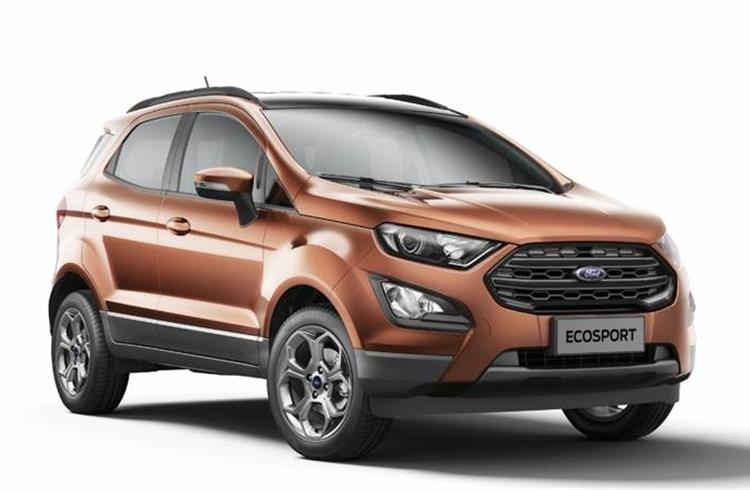 The EcoSport with 88,429 units was the mainstay of Ford India’s exports, accounting for 67.25% of its total PV exports. It is also India's most exported PV.

Hyundai Motor India has wrested the No. 1 passenger vehicle exporter title from Ford India for the fiscal year ended March 31, 2020.

Verna powers Hyundai's export drive
Leading the charge for the Chennai-based Hyundai Motor India is the Verna sedan, with total shipments of 60,065 units and accounting for 35% of the company's overall exports in FY2020. The growing demand for made-in-India Vernas saw the sedan notch 49.12% year-on-year growth and stand out as the company's most exported car last fiscal, and India's second-best export model. It is understood that the Verna is seeing robust demand from Middle East markets especially Saudi Arabia.

The other Hyundai export models that saw growth was the Creta-Venue SUV combine which with 47,601 units, saw YoY growth of 27.58% (FY2019: 37,308). Both SUVs have received a strong market response in Chile, Peru, Mexico, Tunisia and South Africa.

Hyundai Motor India currently exports to around 91 countries across Africa, Middle-East, Latin America, Australia and Asia Pacific. Clearly, its aggressive export strategy for shipping its made-in-India products is paying off. On September 24, 2019 it held an International Partner’s Meet 2019 in New Delhi where 60 of its global partners representing Hyundai from several countries including South Africa, Saudi Arabia, Lebanon, Vietnam, Chile, Peru and Columbia participated. Many new markets like Ethiopia, Zambia and Ghana were also explored for export of the Atos (Santro in India). The representatives got a close look at the company's latest product line-up – the Venue, Grand i10 Nios, Atos (Santro in India) – at the event held at the Buddh F1 circuit.

Speaking at that event, S S Kim, MD and CEO, Hyundai Motor India had said, “Hyundai Motor India plays a key strategic role in Hyundai Motor Company’s global export plans for the world markets. Our consistent efforts towards ensuring world-class quality have helped us become a highly loved brand both in India and overseas. We are overwhelmed with the customer response and appreciation from international markets for made-in-India cars."

“Our deep understanding of export markets helps us to balance out production plans for domestic and exports which further help us to manage our sales numbers for smooth business operations,” he said.

Hyundai Motor Group's sister brand, Kia is also now in India and has begun its export drive. It was in September 2019 that Kia Motors India first shipped 471 Seltos SUVs, transported by road from the Anantapur plant in Andhra Pradesh, from the Chennai Port to some South American countries. Other export markets on the cards for Kia Motor India are the Middle East and South East Asia. Since then till end-March 2020, Kia exported a total of 21,461 Seltos SUVs which gives it No. 7 ranking in the PV Exporters List. Not bad for a new player in the Indian market.

Ford EcoSport: India's most-exported vehicle in FY2020
Ford India, which has been relegated to the No. 2 PV exporter position after two years at the top, exported a total of 131,476 units, which is down a sizeable 19.24% YoY. The company had exported a total of 162,801 units in FY2019 (-11.33%). Ford India’s exports are fuelled majorly by its Ka / Ka+ hatchbacks, Aspire sedan (made in the Chennai plant) and the popular global SUV, the EcoSport compact crossover (made at the Sanand plant), all going to over 50 countries across Europe, Middle-East, Sub-Saharan Africa, Asia, and to emerging markets in North America as well as in Australia. 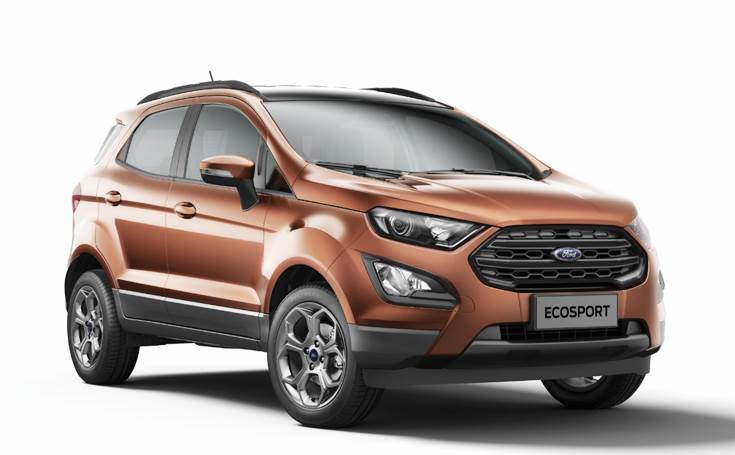 Maruti Suzuki's export programme will receive a boost this year. The company is slated to commence manufacture of the fourth-generation Suzuki Jimny SUV at its Hansalpur plant in Gujarat, initially for export markets, from May 2020.

Nissan bounces back with Sunny days
Nissan Motor India, once a strong exporter, is seeing better days and is at No. 4 in the PV Exporters List. At 79,479 units, its numbers are up 37.87% YoY. Powering this robust performance for the company is the Sunny sedan with 66,667 units, which makes it the third most-exported passenger vehicle from India. This standout performance constitute 63% YoY growth for the sedan, which accounted for an overwhelming 84% of Nissan Motor India's total exports in FY2020.

GM to Beat it from India
FY2020 would likely be the last fiscal to see GM India's export statistics. That's because on January 17, 2020, GM inked a deal with China's Great Wall Motors to sell its Talegaon, Maharashtra plant, thereby marking the complete end to its make in India programme. The Talegaon plant has a manufacturing capacity of 130,000 units per annum and since the company’s exit from the domestic market in December 2017, produces only the Beat hatchback and sedan for the export market.
In FY2020, the company exported 69,933 units of the Beat, down 9.56% (FY2019: 77,330).

Mexico remains one of the most important destinations for the company's made-in- India cars and the Vento has become the highest-selling Volkswagen in that market. Since VW India began exporting cars in 2012, more than 400,000 cars manufactured from the Volkswagen Pune Plant have reached over 50 different countries in Asia, Africa, North America and South America.

The coming years will see increased export activity from Skoda Volkswagen Auto India, which has the required installed capacity (2,00,000 units per annum) in the Chakan plant, which it recently took over from Volkswagen India. With the recently revealed Volkswagen Taigun and Skoda Vision IN concept SUVs set to roll out next year, the company is also looking at exports actively to utilise as much capacity as possible.

The Duster, Captur and Triber together made up the balance 1,589 units (225%). In FY2019, 489 Dusters shipped overseas; clearly the seven-seater Triber, which was launched in South Africa in early February 2020 making a difference. The Triber is the second model built on the CMF architecture to be exported from India, after the Kwid. Renault India plans to expand Triber exports to other parts of Africa, ASEAN and SAARC countries soon.

Some global OEMs ship more cars overseas than sell in India
For all of FY2020, the Indian PV market felt the heat of the prolonged economic slowdown. Add to that the shift to BS VI emission norms, the more recent coronavirus outbreak and dampened consumer sentiment and it is not surprising that the domestic PV market ended FY2020 with a sharp 17.82% sales decline (27,75,679 units).

In the absence of growth in the domestic market, OEMs will strategise to make gains from the made-in-India export story albeit not in the immediate few months as the world continues to combat the coronavirus outbreak.