TVS aims for the skies with Jupiter

On September 16, TVS Motor Co rolled out an all-new scooter, the 110cc Jupiter. A lot rests on the Chennai-based manufacturer’s latest product. 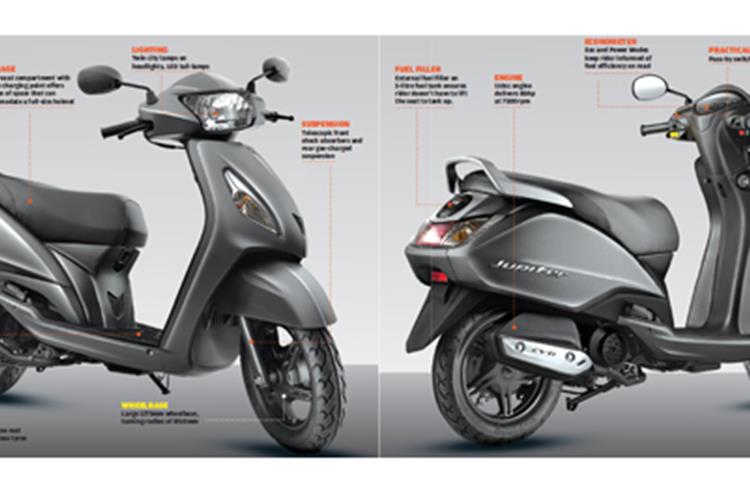 On September 16, TVS Motor Co rolled out an all-new scooter, the 110cc Jupiter. A lot rests on the Chennai-based manufacturer’s latest product. Firstly, the Jupiter will have to act as the diving board for the company to enter the ‘male-single user’ segment of the scooter market, which constitutes a good 36 percent of the close to 280,000 scooters that are sold every month in India. Next, it will have to help TVS regain some market share that it has lost rather rapidly in recent times. And lastly, the scooter will have to steal a base from popular rival, the Honda Activa, for which there is a painfully long waiting period.

TVS though seems to have done its bit to develop a scooter that buyers should veer towards. The Jupiter, a project that took TVS’ R&D team almost a year-and-a-half to develop, overflows with first-in-class features. On the wallet front, at Rs 44,200 (ex-showroom, New Delhi), the 108kg Jupiter has a price tag that’s considerably lower than its competition and, under test conditions, returns a mileage of 62km per litre.

At first glance, it looks like an outright winner and TVS is projecting sales of 10,000 units for September. The company is also hopeful that by December, sales of its scooter range will reach 45,000 units with the Wego and Jupiter contributing 30,000 units between each other. “There will certainly be some cannibalisation between the two, but as long as it is from the same company, it doesn’t matter,” said VenuSrinivasan, chairman of the TVS Group, referring to the possible head-to-head tussle between the Jupiter and the Wego siblings.

The gearless 110cc Jupiter will initially be made available in the North India market due to the early festive season there and sometime before Diwali in South India. “We’ve already billed 4,000 units to the dealers,” said K N Radhakrishnan, president and CEO of TVS Motor Co, adding, “We will definitely do 10,000 units this month (September).”

To understand TVS’ rationale behind launching a scooter aimed at the male rider, it is important to know that out of every 100 scooters that are purchased in India, 36 are ridden only by males. Twenty-nine are ridden only by females and the rest 35 are ridden by both male and female riders. It is this 36 percent majority that TVS is targeting with the Jupiter. That market is currently dominated by the hugely popular Activa which, despite Honda increasing capacity substantially, continues to see a waiting period. TVS could be eyeing the growing number of impatient buyers who seek a scooter straightaway.

In terms of gaining lost market share, Radhakrishnan said that the Jupiter alone should help the company push its market share by close to 3 percent. TVS, at present, has a 12.45 percent share in the Indian scooter market which is, not surprisingly, led by HMSI with an overwhelming 50.65 percent share (see pie chart alongside). In the five months of the current fiscal (April-August 2013), TVS has sold a total of 166,901 scooters, down 9 percent compared to the year-ago period. In August 2013, TVS sold 33,462 scooters, down 10.68 percent (August 2012: 37,462). Plainly put, TVS wants the Jupiter to put some oomph back into its scooter sales.

Not to be too far behind the current scenario, Srinivasan also announced that the company will launch an all-new version of the Scooty. Called Scooty Zest, the scooter will be aimed at ladies and will be launched in January 2014. "After the Jupiter's launch, we are looking at almost 30,000 unit sales from the Wego and the Jupiter alone. So even without the Zest, we’ll be doing 50,000 to 52,000 units by December,” added Radhakrishnan.

Thanks to TVS’ split-launch strategy, the full effect the Jupiter will have on the market will only be seen by December this year. However, early signs should start telling by the end of October and that will determine if the market views the Jupiter as a player that is as big as the planet it is named after or if it is just one among the crowd.