Popular hatchback takes back the No. 1 position from sedan sibling, which had the top slot for two months in a row. 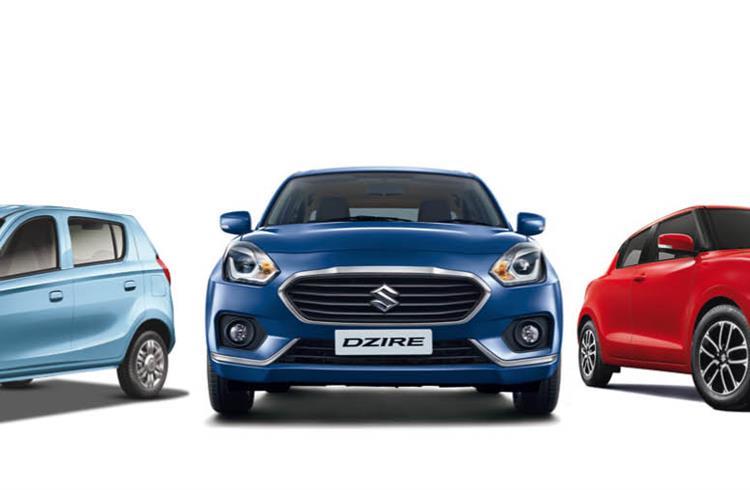 Maruti Suzuki India, which has a ‘problem’ of plenty when it comes to its cars in the Top 10 best-seller list, or for that matter in the domestic market, is seeing its leading hatchback, the Alto and the new Dzire sedan trade places at the top of the PV pecking order.
In August, the Maruti Alto, with sales of 22,237 units, regained the No. 1 position from the new Maruti Dzire sedan, which has won its way into Indian families' hearts and which had topped the chart for two months in a row (June and July 2018).

In comparison to the Alto's performance, the Dzire sold 21,990 units in August 2018; it had sold 25,647 units in July and had made news in June by becoming the top-selling car in the country, dethroning its younger and cheaper entry-level Alto sibling with sales of 18,758 units.

The third-generation Dzire is a more wholesome package than its predecessors, has more cabin space and a larger boot too. Importantly, it has frugal petrol and diesel engines, the former smooth and enjoyable while the latter are a tad clattery.

At No. 3 is the Maruti Swift hatchback with 19,115 units. The snazzy hatchback continues to consistently sell close to the 20,000 unit mark, giving a clear indication of its growing popularity in the B-segment space. On June 13 this year, the third-generation model drove past the 100,000 sales milestone within just 145 days of its launch at the 2018 Auto Expo. The Swift, in its latest eye-catching avatar, has been wooing buyers with its contemporary design language, roomier cabin, plentiful feature set and potent set of engines.

At No. 5 is tall boy and entry level hatchback, the Maruti Wagon R which sold 13,658 units last month, keeping its appeal going strong with family buyers scouting for a practical and spacious offering. The car maintains its fifth rank position after a year; in August 2017, it had sold 13,907 units.

Maruti's game-changing compact SUV and the country's UV leader, the Vitara Brezza remains unflappable and takes No. 6 position in the Top 10 PVs chart. At 13,271 units in August 2018 2018, the practical, spacious and well-equipped SUV remains a popular buy.

The next three models in the Top 10 are all Hyundais. At No. 7, the Hyundai Grand i10 sold 11,489 units last month, down on year-ago sales of 12,306 units but maintains the same rank as a year ago. The Grand i10 sems to be feeling the pressure of the gradual shift of entry level car buyers to more premium offerings. Nonetheless, the Grand i10 continues to be offered with an exhaustive list of comfort and design features, making it a practical buy for families.

At eighth place is the Hyundai Elite i20 with sales of 11,475 units. The updated version of the i20 launched at the 2018 Auto Expo has a lot going for it. The car now offers a crisper touch-screen infotainment system, smarter alloy wheels, as well as a CVT mated to its 1.2-litre petrol engine.

The i20's popular cousin, the Hyundai Creta is at No. 9 position with sales pof 10,394 units, three positions behind the only other UV in the Top 10 list – the Vitara Brezza. In June 2018, the Creta had beaten the Brezza to top spot with sales of 11,111 units, but the Brezza has bounced back since then and is back to being UV major domo.

In June, the  second-generation Honda Amaze had debuted in the Top 10 PVs list with sales of 9,103 units. With sales of 9,644 units in August, the Amaze maintains its No. 10 position for the third month in a row. The Amaze, in its latest avatar offers quite a value-packed proposition, with its spacious cabin, standard safety kit, contemporary features, and the unique diesel CVT option.

Like July, overall PV sales were tepid in August and with the festival season having opened, PV manufacturers will be keeping their fingers firmly crossed that buyer footprints increase in showrooms across the country. What will also impact sales to some extent will be consumers having to contend with the highest-ever prices of petrol and diesel the country has seen yet.