With over 30,000 bookings in hand by the first week of November and Hyundai having despatched enough new Santros to showrooms across the country, expect the new hatchback to be a regular in the Top 10 list. 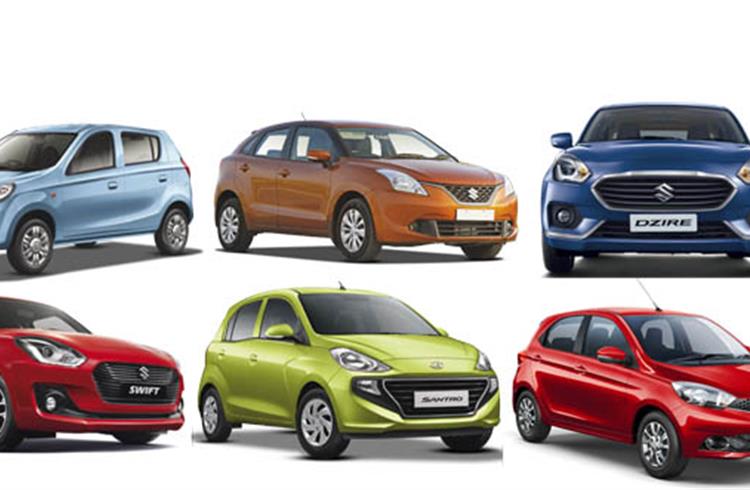 The new Hyundai Santro, which was launched on October 23 with pricing starting at Rs 389,900, has driven into India's Top 10 best-selling cars list in the very first month – at eighth place – with a total of 8,535 units in October 2018.

Online bookings for the model had commenced on October 10 and typically the Korean carmaker would have shifted considerable stock to its dealers across the country, ensuring the model was in as many showrooms as possible. As is known, the numbers in the monthly  Top 10 list are wholesale despatch numbers and not retails.

It is understood that the number of bookings for Hyundai’s small hatchback has exceeded 30,000 units as of November 4. Interestingly, the AMT-equipped Santro has garnered 30 percent of bookings, exceeding the carmaker’s own projections for the automatic version of the car. Hyundai has also seen strong interest in the car’s CNG versions, which account for 21 percent of the bookings. The petrol-manual Santro has received the lion’s share of bookings, with 49 percent of the orders. While the petrol-manual Santro is available in five variants, the petrol-AMT and the CNG manual get two variants each.

Of the trims, it’s the mid-spec versions that are seeing the highest demand. The base trim D-Lite (available solely on the petrol-manual), which starts at Rs 389,000 (ex-showroom, India), makes up about 9 percent of the demand. The top-spec Asta trim, available only on the petrol-manual, gets features such as a 7.0-inch touchscreen and is expected to contribute to a greater portion to sales once the initial rush of bookings is done with.

In the hatchback-dominated domestic market for passenger cars, the new Santro joins eight other hatchbacks and a sole sedan in the Top 10 list.

The best-selling passenger car in October 2018 is the Maruti Alto which regains the passenger car and passenger vehicle (PV) crown, barely a month after it was dethroned by sibling Swift. With sales of 22,180 units, the Alto has driven ahead of the Swift in October 2018, indicating the entry level Maruti still has what it takes to pull the entry level buyer, albeit more in town and country than in the metros, which are seeing a shift to premium hatchbacks.

That could be a reason why the premium Maruti Baleno, sold through the Nexa channel, is at No. 2 position after over a year and more. At 18,657 units sold in October 2018, the Baleno has considerably bettered its performance (October 2017: 14,532) a year ago, when it was at third place and more or less maintained that position over the next 12 months.

The new No. 3 is the new Maruti Dzire with sales of 17,404 units, down from the 21,296 units in sold in September 2018 and 21,990 in August 2018. The sedan, which has wowed its way into Indian families' hearts and which had topped the chart for two months in a row (June/18,758 and 2018/25,647), had made news in June by becoming the top-selling car in the country, dethroning its younger and cheaper entry-level Alto sibling. The third-generation Dzire is a more wholesome package than its predecessors, has more cabin space and a larger boot too. Importantly, it has frugal petrol and diesel engines, the former smooth and enjoyable while the latter are a tad clattery.

The popular Maruti Swift though drops three ranks in barely a month. In September 2018, it had regained the top spot after four months: in April 2018, it was India's best-selling PV barely two months after it was launched. In October 2018, with sales of 17,215 units, the Swift drops to fourth position in the Top 10 Passenger Cars list.

The Swift, in its latest eye-catching avatar, has been wooing buyers with its contemporary design language, roomier cabin, plentiful feature set and potent set of engines. In Global NCAP's latest round of tests of made-in-India cars for the Indian market, the new Swift, equipped with double airbags, and ISOFIX (i-size) anchorages, got a two-star rating in Adult Occupant Protection and two stars for Child Occupant Protection. Is that rating impacting sales in India or are consumers looking for more? The sales numbers for the coming months will have to be awaited before any connection can be made.

At No. 5 is the Hyundai Elite i20 hatchback with sales of 13,290 units. The updated version of the i20, launched at the 2018 Auto Expo, now comes with a crisper touch-screen infotainment system, smarter alloy wheels, as well as a CVT mated to its 1.2-litre petrol engine.

The Hyundai i10 takes sixth place, having sold 11,820 units in October 2018. The Grand i10 seems to be feeling the pressure of the gradual shift of entry level car buyers to more premium offerings. Nonetheless, the Grand i10 continues to be offered with an exhaustive list of comfort and design features, making it a practical buy for families.

The Maruti Celerio is at ninth position with sales of 9,260 units, a marginal growth over the 9,208 units it had sold in September. The refreshing of the model with the X variant seems to have injected new pep into the car’s sales.

In the April-October 2018 period, a total of 1,354,897 passenger cars have been sold in India (+5.87%), and from the looks of it it seems single-digit growth is here to stay at least for the near term. Will consumer sentiment improve and translate into improved numbers as OEMs fervently wish for? Keep watching this space for the latest updates.