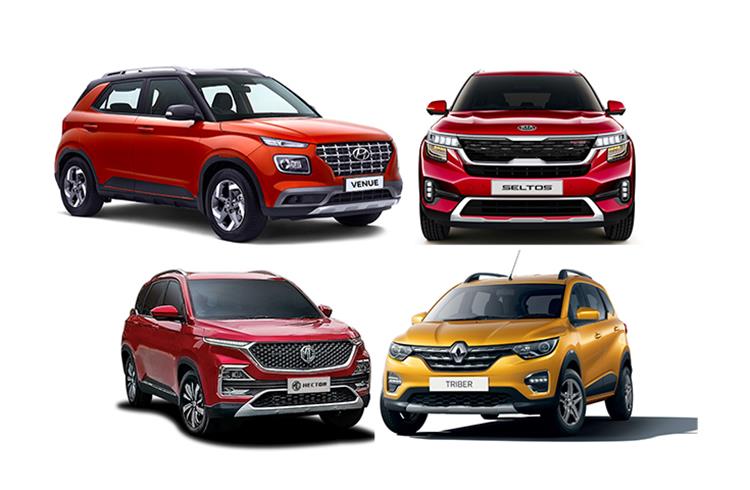 A flurry of new product launches in the SUV segment in the past few months is helping their manufacturers and the industry post improved numbers, even as the other vehicle segments flounder.

In SIAM's just-released September sales numbers, the utility vehicle (UV) segment with total sales of 81,625 units was the sole one among 12 vehicle sub-segments to record growth (5.49%). All the others registered single- or double-digit sales declines, in what is a sea of red. (See Autocar Professional's September and H1 FY2020 sales analysis).

Of the 17 UV players in the fray, four – Hyundai Motor India, Kia Motors India, Renault India and MG Motor India – have made UV market share gains in the first half of FY2020 (April-September 2019). All the others have seen their market shares reduce in comparison to the year-ago period in what has been a difficult six months for the industry – see the detailed market share table below. Not surprisingly, all four UV makers have benefited from their new product launches.

Take a close look at the market share table and you can see that Hyundai has made the maximum market share gains of over 6 percentage points: from 13.84% a year ago to 20.23%. The product that is giving Hyundai new heft is its first-ever compact SUV, the Venue. Launched on May 21, the Venue continues to see surging demand and till end-August had sold a total of 34,739 units. Add another 10,000-odd units for September and you can see the impact of the new model on the company's accelerating sales.

On July 30, Hyundai announced it crossed the 50,000-unit bookings mark for the Venue. The Venue drove into the Top 5 best-selling UVs chart both in May (in fourth place) and June, when it came tantalisingly close to going past the No. 1 UV, the Maruti Vitara Brezza. And in July 2019, with 9,585 units, it took the UV crown, unseating the longstanding UV champion, the Maruti Vitara Brezza. It was the UV leader in August too with 9,342 units. Expect the trend to continue in September.

Giving the Venue good company is the stolid Hyundai Creta, which between April-August sold a total of 40,461 units. Add an estimated 6,000-odd units for September.

Seltos gives Kia 3% UV share in 2 months
Kia Motors India, the newest OEM entry into the Indian market, has made a strong debut in August with its Seltos. The Seltos, which was officially launched in India on August 22, sold a total of 6,236 units last month, giving the company a UV market share of 1.72 percent. And in September, it sold another 7,554 units, which together give the company 3.09% share of the UV market in just two months. The company has 50,000 bookings in hand, which is a good position to be in for a newcomer in the competitive India market.

The Korean brand has confirmed to Autocar India that of the 50,000 bookings made, nearly half are for the 1.5-litre diesel engine model, about 30 percent for the 1.4-litre turbo-petrol, and the remainder for the 1.5-litre petrol. It is aggressively driving production at its Anantapur plant to meet the surging demand for its first made-in-India product.

MG Motors’ first model in India – the Hector – has been on sale since June 27. The demand for the SUV has been very strong, with the carmaker having to temporarily suspend bookings for the Hector in July. By this point, the carmaker had already received 28,000 bookings via its online portal and at its dealerships across the country.

MG announced at the inauguration of its second flagship experience store (located in Mumbai), that it has already received 8,000 new bookings since it reopened bookings for the Hector, on September 29. Prices for the Hector also increased by Rs 30,000-40,000 (depending on version) at that time.

Renault Triber checks in
For Renault India, the recent launch of the sub-4-metre, seven-seater Triber has given the brand some positive movement. In the April-September 2019 period, the company has sold a total of 12,596 units comprising of the Duster, Lodgy, Captur and the Triber, which is a 58% improvement YoY, albeit on a low base. In August, its first month of sale, the Triber went home to 2,490 owners.

Tough times continue for industry
The ongoing market slowdown as a result of the slowiing economy and tepid consumer sentiment is having its say on the  fortunes of the Indian auto industry. Even as these four UV players have posted gains, most of the other players are doing their best to bring in the numbers through aggressive marketing and new variants, and some with discounting, what with the festive season underway. All said and done, from the consumer's point of view, this is the best time to buy a vehicle, or an SUV. 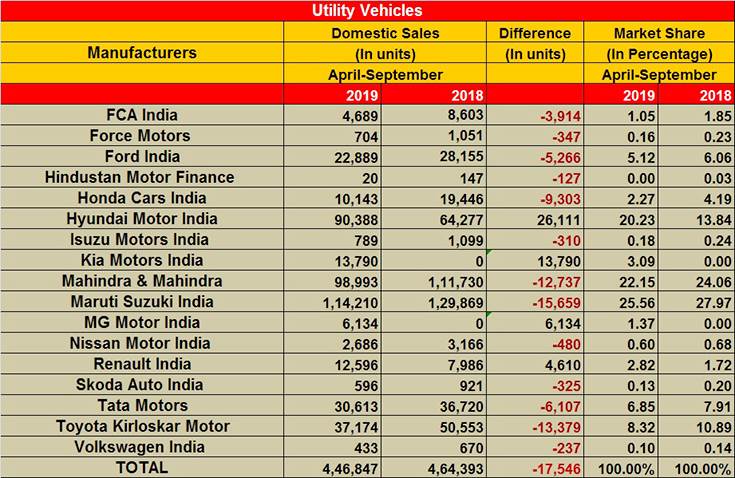