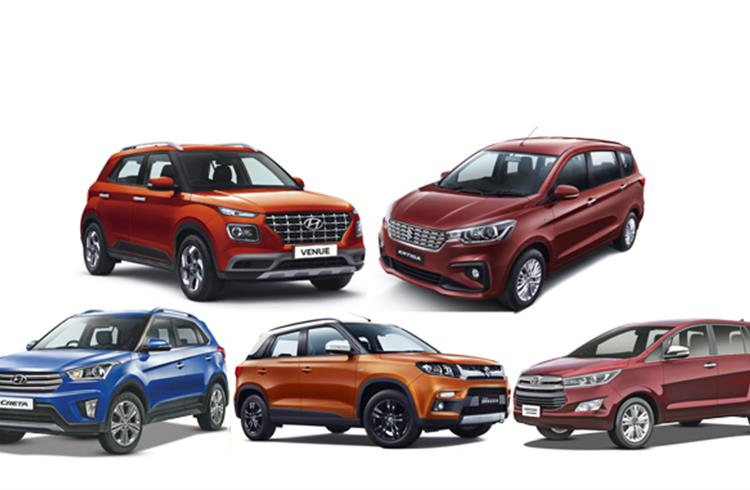 Having missed out on wresting the utility vehicle crown from the Maruti Vitara Brezza by a mere 108 units in June 2019, the recently launched Hyundai Venue compact SUV has now won the No. 1 spot within three months of its launch on May 21.

On July 30, Hyundai Motor India announced it had crossed the 50,000-unit bookings mark for the Venue, adding that it had delivered 18,000 units of the SUV. As per industry sales data, the company despatched 7,049 units in May, 8,763 units in June and 9,585 units in July, totaling 25,397 units. In line with the shift from petrol to diesel, 56 percent of the sales comprise the petrol variant.

It may be noted that Autocar Professional had, on August 15, forecast the Venue becoming the UV boss in July. And, in last month’s Top 5 UVs report too. Given that most of the remaining 25,000-odd bookings in hand and new ones received since then translate into deliveries, expect theHyundai  Venue to stay on top of the UV chart for the next few months.

The Maruti Ertiga MPV is the new No. 2 and a somewhat close second at that. With despatches of 9,218 units in July 2019, the Ertiga in its new avatar is going places. With its modern design, ample space, thoughtful features and a value-for-money package, the new Ertiga is ticking most of the right boxes for family and fleet buyers. Of the total 33,736 Ertigas delivered in the first four months of FY2020 and averaging 8,434 units a month, Maruti's MPV is setting a good pace and that too in depressed market conditions.

In third place is the Hyundai Creta with 6,585 units, down from the 8,334 units it clocked in June 2019. The Hyundai Creta had toppled the UV market leader Maruti Vitara Brezza in May 2019 for the second time in a year but the Vitara Brezza bounced back in June to regain the crown with 8,871 units. Creta sales have been slowing for some time now and it will now soon be further impacted by the newest SUV in town, the Kia Seltos. The Hyundai Creta has been on sale for four years now, although it has been upgraded through the years with refreshed styling and more equipment – which is why Hyundai India plans to launch of the all-new Creta next year, when it completes 5 years in the Indian market.

Vitara Brezza sees lowest-ever sales at 5,302 units
The Maruti Vitara Brezza, the longstanding UV market leader right from its launch in March 2016 and the game-changer in the segment, is badly down – at 5,302 units in July 2019, it has slid to No. 4 position.

In fact, as per Autocar Professional’s statistics, July 2019 sees the Brezza record its lowest ever sales – 5,302 units. Even its opening sales in March 2016 were higher at 5,563 units. With increasing competition from newer rivals like the Hyundai Venue and Mahindra XUV300, both of which are also available with petrol engines, and no petrol engine option yet in a market making a strong shift from diesel to petrol, the Brezza's dipping month-on-month numbers have allowed a new challenger to claim the top spot.

However, Maruti Suzuki is currently in the final stages of readying a petrol-powered Vitara Brezza for the Indian market. The current-gen Vitara Brezza SUV has been on sale since 2016, with just a single diesel engine option mated to either a 5-speed manual or an AMT gearbox. Autocar India has reported a few months ago about Maruti developing a new petrol-powered Vitara Brezza, and also confirmed that the model will see its market launch in February, mostly likely at the upcoming Auto Expo 2020.

The Toyota Innova Crysta MPV returns to the Top 5 UVs chart after a gap of two months with sales of 4,865 units and in fifth place. The MPV benchmark in India by far, the combination of a spacious cabin, strong petrol and diesel engines and plenty of equipment continue to draw buyers to this comfortable vehicle, even though it is an expensive buy.

Come August 22 and Kia Motors India will officially launch the Seltos, whose production has recently begun. While the initial round of pre-launch bookings shows the Seltos' consumer-pulling power, an aggressive pricing strategy just might further swing the UV counter in the Seltos’ favour.

Clearly, there are exciting times in store on the UV battlefield where the growth mantra is SUVival of the fittest. Stay tuned.