With overall sales down 22% in September and 17% in the first six months of the fiscal, India Auto Inc stares at continuing difficult times and desperately needs a scrappage policy to revive demand. 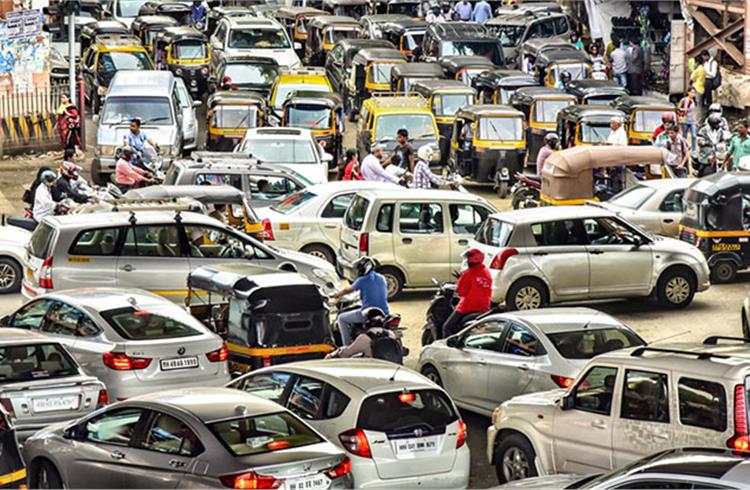 Despite all stakeholders fervently hoping that vehicle sales would see better days in September, the month turned to be yet another month of poor demand for the Indian automobile industry. Overall sales across vehicle segments were down sharply by 22.41 percent with total factory despatches of 2,004,932 units (September 2018: 2,584,062). 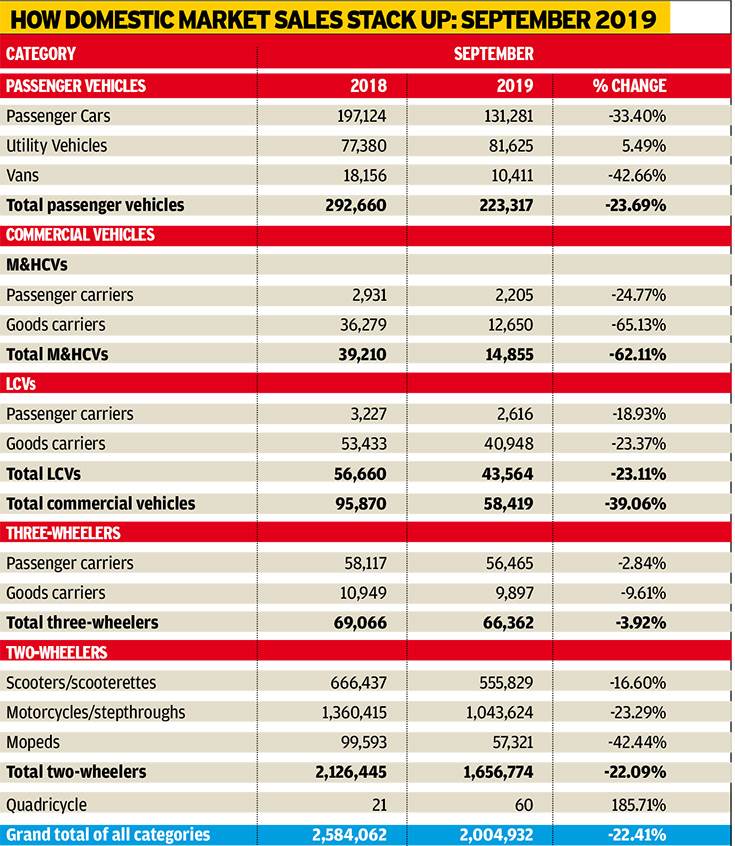 In the absence of a growth catalyst from the government and the continuing slowdown in the economy, automobile sales are currently experiencing what is possibly the worst downturn in recent years, down 11 months in a row.

At a press conference in New Delhi on October 11, Rajan Wadhera, president of the Society of Indian Automobile Manufacturers (SIAM), said, "We are at a very critical juncture with the first half of FY2020 getting over and have mixed feelings about the growth outlook for the complete fiscal at the moment."

In comparison, PVs have borne the brunt of a slowing economy, weak consumer sentiment and increasing ownership costs along with the ramifications of the recent floods in states such as Uttar Pradesh, Bihar and Maharashtra. 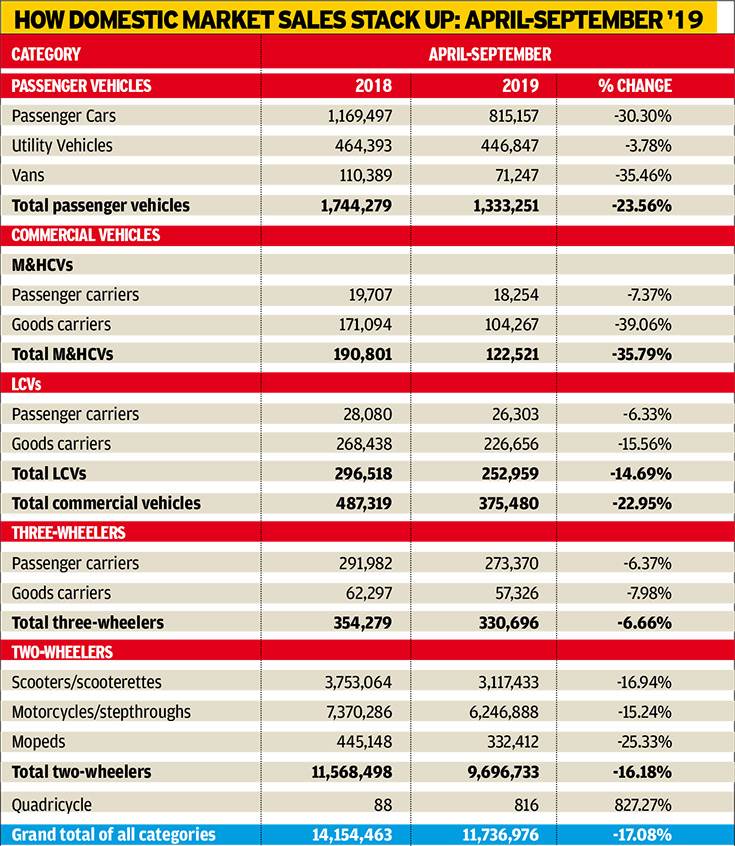 The half-year statistics do not make for good reading either. Worryingly, sales in the medium and heavy commercial vehicle sector, and good carriers within it, are seeing a particularly sharp decline.

Goods carriers, on the other hand, witnessed a considerably bigger drop of 39.06 percent in M&HCVs and 15.56 percent in LCVs, respectively. While sales of goods carriers stood at 104,267 units in the M&HCV category (171,094), 226,656 LCVs (268,438) were sold. According to SIAM, a fall in the GDP growth rate to a six-year low along with revised axle-load norms allowing up to 25 percent more payload, have together resulted in the slowdown in M&HCV goods carriers. The apex industry body also says flat growth in crop production and a drop in consumer durables sales resulted in slow sales for SCVs and pick-ups.

According to Wadhera, "While we have faced all sorts of challenges till now, we have started seeing some green shoots (of recovery) whether coming from the effect of the various measures announced recently by the government or due to the enhanced mood during the festive season." "Retail sales over the last 10-12 days of the auspicious Navratri period have been quite good for some OEMs. Also, the special messaging from the government in August regarding co-existence of internal combustion engined vehicles and electric vehicles and clearing the air on longevity of BS IV vehicles coupled with huge discounts (higher than last year) has led to a visible improvement in the consumer sentiment," he added. Will all of these moves translate into better numbers October onwards?

Near-term challenges
Inventory liquidation still remains a big challenge for the industry and even though RBI had recently announced a cut in the repo rate, concerns of lack of finance availability especially at the NBFC level will continue to pose challenges in the short term. Considering that the automotive industry has to maintain a lean inventory for a smoother BS VI transition in less than six months from now, it is expected that OEM production will remain subdued over the coming few months. However, with H2 FY2020 setting off over a low year-ago base of H2 FY2019, the growth is expected to be much more pronounced. Growth enablers While the auto sector did receive some indirect incentives from the Finance Minister, the industry is now looking forward to a scrappage policy that incentivises replacement of old trucks. "These trucks do not adhere to any emission norms, nor have respectable fuel efficiency either. Such policies in the US and Europe have given an impetus to new vehicle sales," said Wadhera.

The industry is also hopeful that a bountiful monsoon brings back demand in the CV segment due to higher crop produce and also because of the increasing number of road and infrastructure projects getting commissioned. "We will need to wait for October to get over to forecast anything meaningful in terms of the growth outlook for this fiscal, but we feel that the consumer sentiment is improving and the industry is hopeful of recovery. "The festive season itself could be the flywheel which will generate the momentum for growth," said the rather optimistic-sounding president of SIAM. 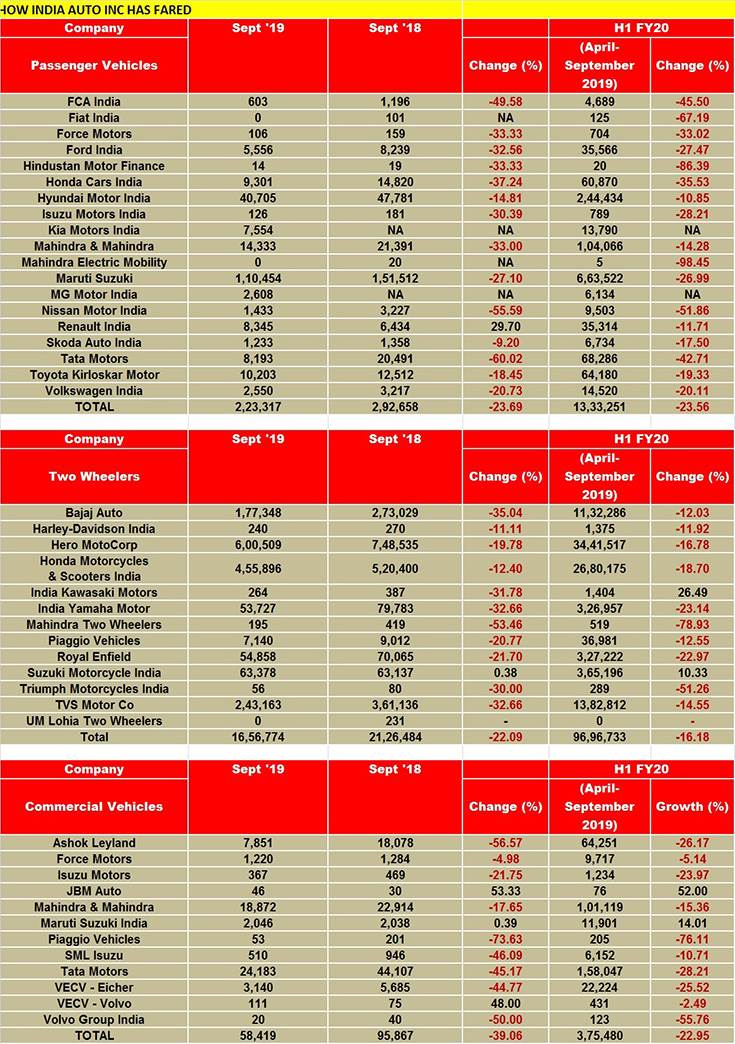