Once a booming segment, scooters are now feeling the heat of slowing sales. In April, total despatches of 489,852 units meant substantial de-growth of 26 percent. 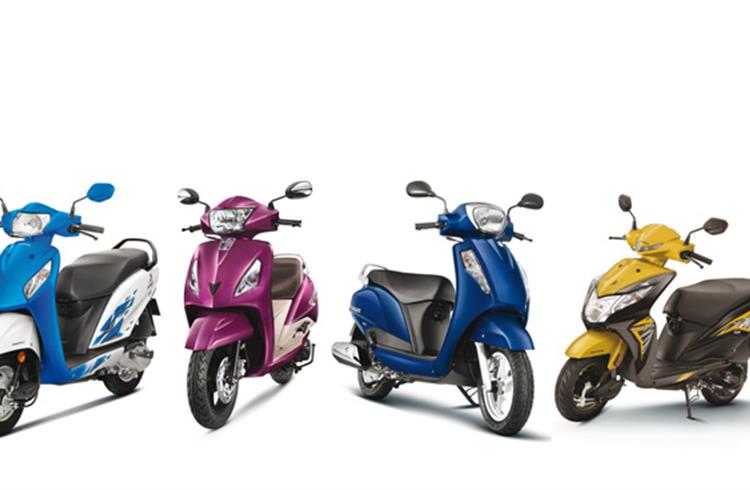 Like Maruti Suzuki is to the passenger vehicle industry, Honda is to the scooter market. The sharp fall in demand for the country’s best-selling scooter – the Activa – is impacting overall scooter industry numbers and how.

While the Honda Activa remains the No. 1 by far, its sales of 210,961 units are a far cry from the year-ago sales of 339,878 units in April 2018. In fact, last month’s Activa sales are the lowest for the company since the 174,393 units clocked in December 2018. The Activa was also the second best-selling two-wheeler in India, after the Hero Splendor.

The TVS Jupiter, which is back to its No. 2 position from February 2019, sold 54,984 units in April 2019. The 110cc Jupiter continues to be a strong contributor to TVS Motor’s monthly sales performance.

Meanwhile, the Suzuki Access 125 continues to see demand comes its way. The popular scooter went home to 48,463 owners in April 2019. The Japanese company’s turnaround efforts are finally visible as it continues to work not only on its product portfolio but also on the dealer development side.

Breathing down the Access’s neck is the Honda Dio, which saw despatches of 46,501 units in April, just 1,962 units behind. Will the Dio ride ahead of the Access in the coming months? Will the Access retains a strong family buyer appeal, the Dio has strong brand equity among young college-going buyers, with Jharkhand, Karnataka and Maharashtra being strong markets. Interestingly, with a 44 percent export market share in the scooter segment, the Dio is also the most exported scooter from the country.

At No. 5 is the TVS NTorq with 20,684 units. The snazzy-looking TVS NTorq has a lot going for it including its youthful appeal. Monthly volumes for the latest TVS 125cc scooter have stabilised at around 15,000 to 17,000 units albeit April saw sales impacted for overall industry. The scooter is riding the growing wave of demand for 125cc scooters, so expect better numbers to come its way later in the year.

Likewise, demand for the Hero Destini 125 continues to surge. The scooter’s aggressive pricing (sub-Rs 55,000 ex-showroom) appears to be working for Hero MotoCorp. The youngest Hero scooter, which is at sixth position, sold a total of 16,301 units. The Destini has been positioned as a family scooter for a more mass market appeal and the increasing sales have proved that this has worked.

At No. 7 is the Yamaha Fascino with 14,873 units, down 2 percent YoY (April 2018: 15,164). Yamaha needs to do more if the uptick in demand is to be maintained,  especially when you consider that it now has direct rival from Hero in form of the new 110cc Pleasure Plus.

Honda’s Grazia rides in at No 8 position and 11,823 units. This is a sharp decline of 119 percent YoY (April 2018: 25,949), when the scooter was at sixth place. Much was expected of this scooter when it was launched but clearly the big numbers have yet to come.

Hero MotoCorp’s 102cc Pleasure scooter, which targets urban female commuters, secured wholesale volumes of 10,689 units in April 2019, 61 percent down YoY (April 2019: 17,225). This is impressive when you consider that this scooter has remained unchanged from almost 14 years now.

Closing the Top 10 listing is the Yamaha Ray with 10,336 units. It recently made the news when it got updated with a combined braking system and got a new blacked-out colour scheme.

The dampened market sentiment that has impacted demand in the scooter market can be seen from the fact that a year ago, in April 2018, the Top 10 best-selling scooters totaled 605,082 units, compared to 445,615 units in April 2019 – a considerable decline of 26.35 percent.