Both Hyundai Motors India and Tata Motors posted their best-ever sales in CY2022 but the sales volume difference of 173,855 units in CY2021 narrowed down to 25,713 units with Tata recording 59% YoY growth to Hyundai’s 9 percent. 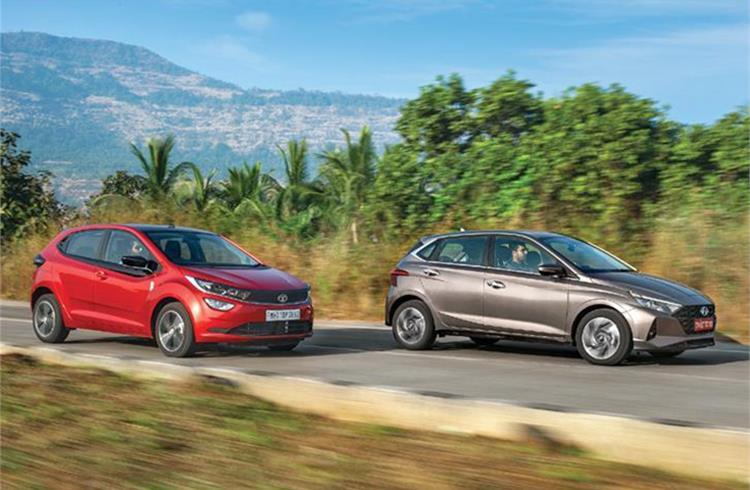 The Indian passenger vehicle (PV) industry, which notched record wholesales of 3.8 million units and a strong double-digit year-on-year growth of 24% in calendar year 2022, also saw carmakers like Hyundai Motor India, Tata Motors, Kia India and Skoda Auto India register their best-ever annual sales. As 2022 came to a close, industry observers were keen to see if there would be a change in the balance of power for the No. 2 position. Market leader Maruti Suzuki India, with 1.57 million units and a 42% PV share, remains unassailable.

The battle in question is the one between the longstanding No. 2 PV OEM, Hyundai Motor India and the hard-charging Tata Motors which entered CY2022 as the third-placed player but at some distance from the Korean carmaker. In 2021, Hyundai had sold a total of 505,033 units, which was a good lead of 173,855 units over Tata Motors’ 331,178 units. In CY2021, While Hyundai had average monthly sales of 42,086 units, Tata Motors’ monthly average sales were 27,598 units.

Both companies, which have hugely benefited from the surging demand for SUVs in the Indian market, have two high-selling products each – the Creta and Venue for Hyundai, and the Nexon and Punch for Tata. While the Creta-Venue combine has contributed an estimated 261,598 units or 47% to Hyundai’s total CY2022 sales, combined Nexon-Punch sales at 297,841 units accounted for 56.53% of Tata’s annual number last year. The Nexon remains India’s best-selling UV with an estimated 168,478 units, followed by the Creta with 140,895 units.

The Creta, which sold an estimated 140,895 units in 2022, is Hyundai’s best-selling product in India while the Nexon, with 168,478 units, is Tata Motors’ best-seller. Both models are the UV segment leaders in the country.

On the production front, in CY2022, Hyundai Motor India is understood to have produced around 700,000 units at its plants in Sriperumbudur, Chennai. It is to be noted that Hyundai is also India’s No. 2 PV exporter and between January-November 2022 shipped 129,279 units with December exports to be added to that tally. In comparison, Tata Motors has far lesser overseas shipments which enables it to focus more on the domestic market. And the carmaker is set to get a manufacturing capacity boost of 300,000 units and scalable to 420,000 units per annum when its newly acquired Sanand plant of Ford India goes on stream.

While it can be expected that Hyundai Motor will do all to protect its No. 2 position and turf, Tata Motors has the EV advantage with the Nexon, Tigor and the just-launched Tiago EVs. What’s more, being India’s most affordable electric hatchback, the Tiago EV (for which Tata has already received 20,000 bookings) can be expected to eat into ICE hatchback sales as well as of CNG models, given the high price of petrol, diesel as well as CNG. Given the sales momentum it is seeing, expect Tata to record 50,000-unit monthly sales for the first time ever in the first few months of 2023, even as the Nexon EV will see its first proper rival in the form of the Mahindra XUV400 electric SUV.

Hyundai, whose bold six-model EV programme for India on the E-GMP platform is still some years away from seeing production, has six new models planned for 2023 – two SUVs (facelifted Creta and an entry-level micro-SUV), one hatchback (facelifted Grand i10 Nios), two sedans (facelifted Aura and next-gen Verna) and one EV (Ioniq 5) which will be its flagship product.

Tata Motors’ new model programme for this year will see three SUVs (Punch EV, facelifted Harrier and Safari). Both carmakers will be putting on a strong show at the Auto Expo 2023, which opens in Greater Noida, New Delhi on January 12 vying for the car buyer’s attention and purchase decision.

Before the year is out, there are three months to go for FY2023 to end. In April-December 2022, the first nine months of the ongoing fiscal year, Hyundai (419,839 units) is ahead of Tata Motors (403,747 units) by 16,092 units. Tata, which surpassed the half-a-million milestone for the first time in a calendar year in 2022, looks well set to repeat the feat in a fiscal. Will that power it to No. 2 on the podium or will Hyundai maintain its position? Keep watching this space.