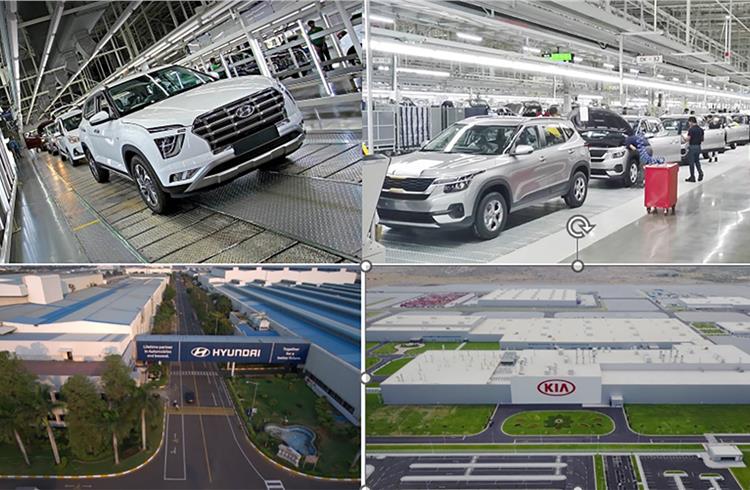 Close on the heels of grabbing the tag of the world’s third largest carmaker, Hyundai Motor Corporation (HMC) has achieved a significant milestone of producing over a million units annually in India, one of its fastest growing global markets, for the first time ever.

The South Korean chaebol is only the second automaker, after Japan’s Suzuki Motor Corp, to achieve the production milestone of a million units (10 lakh units) in a single year. This also underscores the strong acceptance for HMC’s Hyundai and Kia operations in a highly competitive market, which has seen some big brands like Ford and GM exit in recent years.

Hyundai with 15.45% and Kia with 7.27% together currently account for a near-23% share of India’s passenger vehicle sales, which is slated to hit a record 3.8 million units in CY2022. The Korean siblings have been able to achieve record calendar year sales mainly because of accelerated production levels.

At present, India accounts for almost 15% of HMC’s total global output and also ranks amongst its top 3-4 production bases in the world, catering not only to the growing domestic market but also to key export markets of Africa, Middle East and Latin America.

Make-In-India growth story just got better
HMC’s best-ever annual production volume in India as yet, estimated to be between 1.02 to 1.04 million for combined Hyundai-Kia manufacturing operations and up 20% over CY2021 output, is thanks to both OEMs successfully riding the wave of SUV demand, particularly for midsize and compact models.

Autocar Professional learns while Hyundai Motor India is set to close CY2022 with an output of about 700,000 units, Kia India’s production tally is 340,000 units. 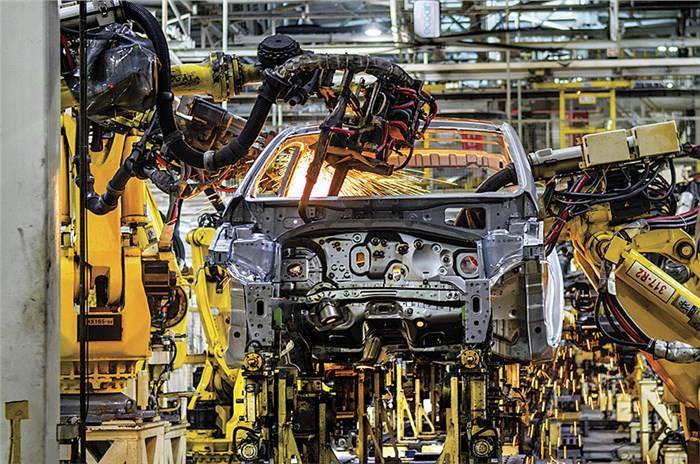 According to Tarun Garg, Director (Sales and Marketing), Hyundai Motor India, the company has been closely following market trends and moving to the segments where consumers are flocking. “We will be selling our highest-ever domestic annual volumes in 2022, posting a growth of more than 9% over 2021. The market is demanding more premium vehicles and SUVs and we have offered that. SUVs continue to drive the growth momentum for Hyundai and account for more than half of our total volumes. Even with the increase in production, our Creta SUV continues to generate higher bookings than deliveries,” he added.

While Hyundai Motor India has been working hard to hold onto its No. 2 position in the PV market, with a hard-charging Tata Motors hot on its heels, Kia has posted an over 40% growth in volumes in 2022, led by its expanded portfolio. Even as the compact and midsize Sonet and Seltos SUVs maintain  their strong position in their respective segments, the recently launched Carens MPV has delivered strong incremental numbers for Kia in 2022.

Myung-sik Sohn, CSO, Kia India, says that in 2022, due to improved customer sentiment and pent-up demand, the company posted very healthy sales figures and ramped up capacity to meet higher demand. “The commencement of the third shift at the Anantapur Plant earlier this year and the gradually improving supply chain has also helped us streamline the delivery period and meet our customers' expectations,” said Sohn.

Targeting young India
Having completed 25 years of its presence in India, the secret behind the Hyundai Motor Group’s success has been its ability to offer more per car than the conventional alternatives from rivals.

From a journey that began with the mass-market Santro hatchback, Hyundai Motor India has consistently raised the bar through improved design, space and features. Over the years, the company product portfolio has evolved with a stronger value proposition designed to cater to aspirational Indian youth.

The 2000 to 2010 decade saw millions of cars being sold and the replacement cycle kicked in the past decade, even as the growing economy brought in millions of first-time car buyers.

If it was the series of compact cars from 2000 to 2015 that made Hyundai a household name in India, later years saw it roll out some of its best sedans – the Accent, Elantra and Sonata – to carve a premium positioning for itself.

Even as PV market leader Maruti Suzuki held onto its fortress of compact cars, Hyundai began flanking the space with different body styles across a wider price point. Brand Hyundai received a fresh charge with the introduction of the Creta in 2015 and soon transformed into a strong upgrading alternative to millions of car owners, edging ahead of Japanese carmakers Honda and Toyota.

According to Garg, 45% of Hyundai cars sold in India are priced above Rs 10 lakh – this was 21% a few years ago. To be fair, the average price points are moving up due to stringent emission and safety norms but Hyundai is also beefing up its cars with more tech and features. 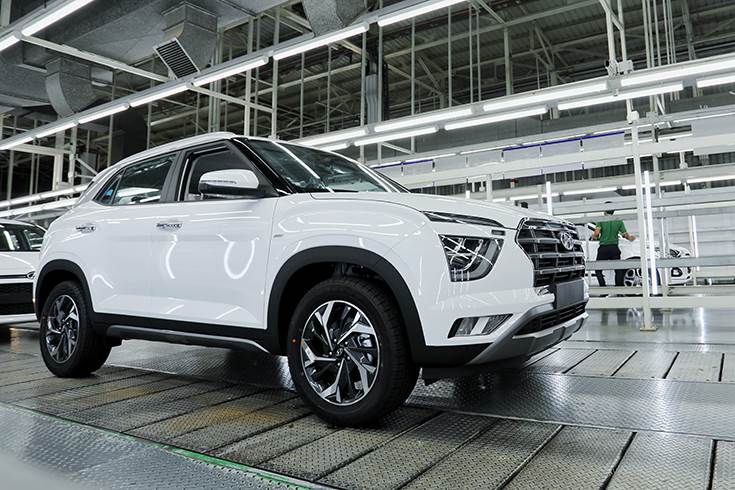 Riding the SUV wave
In line with global trends, the Indian passenger vehicle market, which is seeing strong double-digit growth of around 30%, is benefiting hugely from the sustained surging demand for UVs and SUVs.

Therefore, it is not surprising that for Hyundai, which has clocked its best-ever annual sales of 552,511 units in CY2022 (up 9.4%), over 50% of its sales belong to SUVs. The Creta, its best-selling product, sold 140,895 units and accounted for 25.50% of total sales last year. Also, the share of diesel sales in SUVs is over 40% while 20% sales are for Hyundais equipped with automatic transmission and 26% for vehicles connected car features.

Another revelation is that the reducing age of the Hyundai customer – almost 23% of buyers in 2022 are less than 30 years old; this was only 12% in 2018.  “More and more younger customers are coming to Hyundai. We are upping the ante, we are moving up, we are going beyond mobility. In line with the customer moving up, we are also focusing on higher trims and SUVs. We will continue to move where the buyers are,” added Garg.

Kia ups the ante with UVs and plenty of variants
If Hyundai has become the preferred choice for upgraders due to its strong value offering, its sister brand Kia further upped the ante since its market entry in August 2019. Not only did it choose SUVs as the target segment but it ensured that the range of products it developed for India had a strong design DNA and came laden with features and technologies not seen in India at the time, at an extremely accessible price.

Kia’s successful market mantra was to offer a truly wide array of variants across engines, transmissions and features and even brought some of the most highly advanced features from the premium and luxury market into mainstream SUVs.

Not surprisingly, Kia was the fastest to half-a-million sales in India. It drove past the 500,000 sales mark in July 2022, within three years of beginning operations. Importantly, it was also the quickest to make profits in this part of the world, an area where a number of multinational corporations have faltered.

Hyundai Motor too continues to make healthy profits in India and has in a way become a template for an MNC to follow. Its recipe of sweating assets aggressively with capacity utilisation rates of over 90% and using the base for exports to ensure significant economies of scale has paid dividends. Over time, the company has judiciously diverted capacity, either in the domestic market or exports to ensure high utilisation rates.

Tackling competitive pressures
While Kia has been outpacing the market growth due to incremental volumes coming from new models, Hyundai Motor India has seen its share decline. Garg clarifies that in the segments where Hyundai is present, it enjoys about 19% market share. However, the brand still doesn’t play in a fifth of the market and does not have a presence in the entry car, micro-SUV or the MPV segments.

Declining to share new product plans and the potential of bridging this gap, Garg says, “We will continue to move where the customer is moving. We continue to study the market, some of the gaps may get filled and some may not. But new models can help build the market share.”

The company will be banking on the new-generation Verna – BN7i and the all-new micro-SUV (codenamed Ai3 CUV) to deliver the incremental volumes.

Garg remains non-committal on numbers and says there are many uncertainties still and he would like to plot the market quarter by quarter. “There are still challenges of supply chain, China Covid, inflation, interest rates amongst other factors, but the resilience of India is shining through. Rising internal consumption and growing GDP will offer the tailwind to demand,” he added.

For Kia India’s Sohn, 2023 is going to be both exciting and challenging with RDE (Real Driving Emission) norms coming into effect in April 2023. This tech upgrade will mean an increase in vehicle cost, especially for vehicles equipped with diesel powertrains, and could impact sales going forward.

This market reality just might push many consumers to buy pre-owned cars and Kia India has readied itself for that by expanding its CPO (Certified Pre-Owned) outlets, a segment it entered in November 2022.  “We expect good footfall at our Kia CPO outlets. In 2022, we are expanding our CPO network to 30 outlets and, in 2023, to 70 outlets. Overall, with gradual improvement in the supply chain, we expect healthy sales to continue in 2023, barring any unexpected macroeconomic shock. Hence, we remain cautious of dynamic market conditions,” added Sohn.

All factors put together, the joint force of Hyundai and Kia is today a key dynamic in the Indian PV and UV market which rival automakers keep a tab on.

ALSO READ:
India shines for Kia, accounts for 9% of global sales in first 11 months of 2022