Though on a monthly basis, the sales have seen incremental increase but the industry is not entirely out of the woods as the FY2021 sales are significantly below the FY2020 sales. 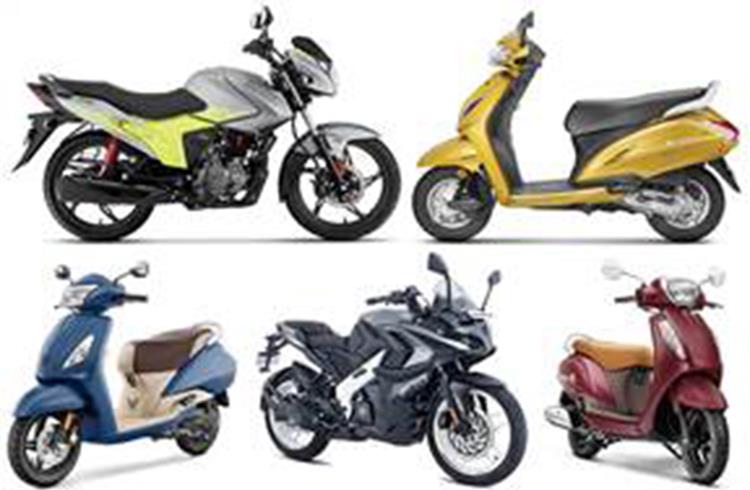 If India Auto Inc is seeing a glimmer of hope in terms of sustained growth, it has the two-wheeler and passenger vehicle segments to thank. From the March 2021 and FY2021 sales numbers released by the top four two-wheeler OEMs, it is amply clear that in the second half of the year, they have managed to claw back a substantial amount of sales lost in the trouble first half. However, given that these four players are also the key drivers of mass mobility in the form of entry-level motorcycle and scooters, it can be surmised that Covid-induced loss of sales from consumers belonging to the bottom of the pyramid would have contributed significantly to the dampened sales. Effectively, it's been only 11 months of sales in this financial year.

Renewed surge of Covid-19 infection across the country is fanning fear about further halt in production even as the segment is tackling challenges like production slowdown due to supply-chain shortage, sky-high fuel prices and concerns about customer's buying power.

Bikes like Splendor, Passion, Xpulse and scooters including Maestro and Hero Destini continue to be the best sellers for the two-wheeler maker. Interestingly Splendor and Hero HF continue their winning streak right from the beginning of 2021 – both these bikes were the top selling bikes in India in January as well.

Hero also registered its highest-ever sales in global business in a single month by clocking 32,617 units in March, nearly 82 percent increase. However, if we compare the performance in the entire fiscal, Hero MotoCorp sold 57,91,539 two-wheelers in FY2021, down 9.6 percent compared to the previous one( FY2020: 64,09,719 units).The company said the sales were adversely impacted last year due to the transition to BS VI from April 2020, in addition to the nationwide lockdown last year to contain the spread of Covid-19.

Interestingly, Hero MotoCorp had already announced a hike in prices of its scooters and motorcycles with effect from April 1, 2021 to partially offset the impact of increased commodity costs. The price increase across the range of two-wheelers will be up to Rs 2500.

The company is concentrating on premium bike segment in India and has also expanded the BigWing touchpoints across the country. It is also targeting the young motorcycle enthusiasts in the country with launches like the Honda CB650R and Honda CBR650R

The company's total two-wheeler exports grew by 164 percent at 105,282 units in March (March 2020 exports: 39,885 units). This is primarily on the back of increase in motorcycle sales in key international markets.

Commenting on the higher exports, Sudarshan Venu, Joint Managing Director, TVS Motor said, “Our international two-wheeler business achieved a sales milestone of 100,000 units in March.  Along with our industry peers, we look forward to continue playing a role in making Indian two and three-wheelers popular and aspirational in many global markets.”

Exports increased 32 percent to 148,740 units from 112,564 vehicles sold in March 2020. According to Rajiv Bajaj (as discussed in an interview to Autocar Professional in March), “As far as exports are concerned, it’s so far so good but we should still wait and watch. We have to see how things evolve. We must remember that for the first three months, we could not export anything and we are seeing some of that pent-up demand also . . . to that extent 250,000 units a month is not the new normal and I would say that it is still 200,000 units only.”

Royal Enfield: 612,350/-12%
Royal Enfield’s March sales grew 84 percent to 60,173 units compared to 32,630 units during the same month last year. However, compared to 65,114 bikes sold in February, the March sales dropped eight percent month-on-month. It is interesting to note that the 2021 Autocar India Bike of the Year, Meteor 350 was among the best sellers along with the Classic 350.

The company exported 5885 units in March 2021. This is particularly striking given the company’s focus on growing the export share. In fact, the midsize motorcycle major also opened its first flagship store in Tokyo in January in line with Royal Enfield’s focused international thrust of leading and expanding the global midsized motorcycle segment (250-750cc).

For the entire financial year, FY2021, Royal Enfield sold 612,350 motorcycles down 12 percent from 695,959 units sold in FY2020. The company recently announced the launch of new colours on the 650 Twin motorcycles in an effort to strengthen its hold in the mid-size motorcycle (250cc-750cc) segment. Meanwhile The Interceptor 650 created a new record at Speed Week Australia with a top speed of 212.514 km/h.

So overall, the headwinds continue for the two-wheeler manufacturers with commodity prices still hovering at the higher end of the spectrum and shortage in semiconductor chips. As Bajaj Auto MD, Rajiv Bajaj highlighted in a recent interview to Autocar Professional in March, 2021, “Costs have gone up and everybody has increased prices. Now there is talk of increasing them further from April 1 or thereabouts. It is one of the highest spikes in commodities in recent times.”

In some states like Maharashtra, a key auto hub, the bulk of Oxygen supply has been redirected primarily for medical purpose, given the resurgence in Covid-19 cases. This along with the other challenges make the road to revival a rather bumpy one.