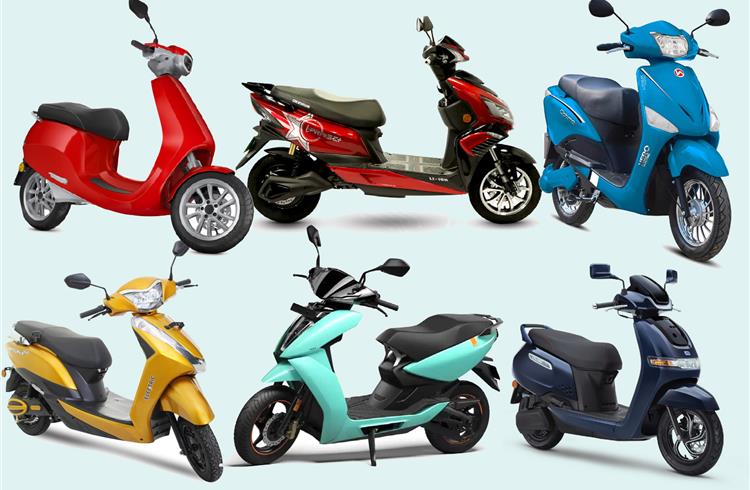 It’s the last day of calendar year 2022, a year which has seen the electric vehicle (EV) industry dominate the headlines, both in India and overseas. 2022 has clearly been a record-setting year for the EV industry, considering that a total of 995,319 EVs across vehicle segments were sold, up 208% year on year (all-India EV sales in 2021: 322,871 units) and a massive 509% increase over the 163,458 EVs sold in 2019, a pre-Covid year. The biggest contributor to this sterling growth is the electric two-wheeler industry.

A deep dive into the e-two-wheeler industry retail sales, using new vehicle registration data from the government of India’s Vahan portal (as on December 30, 2022) enables a comprehensive look into the industry’s growth. 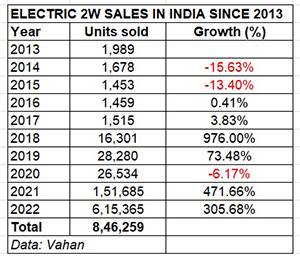 In-depth analysis of the company-wise retail numbers reveals that the top 10 OEMs – Ola Electric, Okinawa Autotech, Hero Electric, Ampere Vehicles, Ather Energy, TVS Motor Co, Bajaj Auto, Pur Energy, Revolt Intellicorp and Being India Energy – account for 550,562 units or an overwhelming 89 of total sales. The extent of the dominance of these Top 10 manufacturers can be gauged from the fact that the first two – Ola Electric and Okinawa Autotech – are the only ones with sales of over 100,000 units each. The other eight – No. 3 to No. 10 – have each clocked sales in five figures in 2022. Meanwhile, another 20-odd OEMs are engaged also engaged in a fierce fight for a slice of the action of India’s booming e-two-wheeler market.

Here's taking a closer look at how the major players performed in 2022. 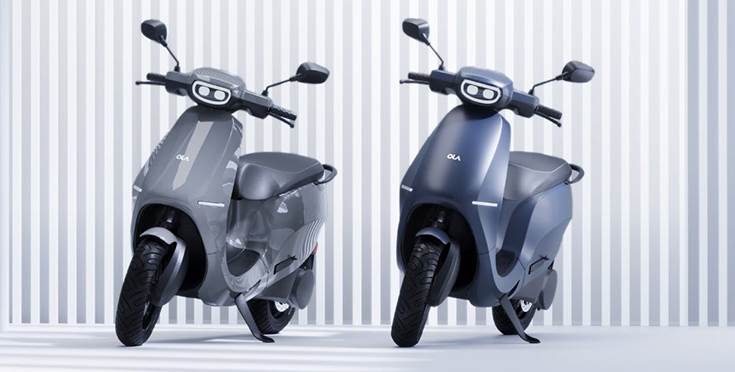 With cumulative 12-month sales of 108,130 units, Ola Electric is India’s electric two-wheeler industry leader and accounts for a 17.57% market share. In the final numbers game, it was ahead of No. 2 Okinawa was just 6,764 units and 11,224 unit of third-placed Hero Electric.

What made the difference in the race to the title of market leader is that Ola Electric saw consistent sales of over 16,000 units for the October-November-December period. In comparison, Okinawa saw sales decline month on month in November and December, and Hero Electric in December, possibly due to both these companies not being able to factor in the FAME II subsidy in full.

CY2022 will be seen as a year when Okinawa Autotech, which has a large portfolio of both high- and low-speed e-scooters, came very close to being the market leader but was pipped in the last two months of the year – by just 6,764 units. With cumulative sales of 87,340 units in the January-October period, it was ahead of Ola Electric, which had 75,603 units to its name in the same 10 months.

What put paid to its sustained growth story were the month-on-month sales declines in November (9,063) and December (4,963). The December numbers are the lowest for the company in the entire year. 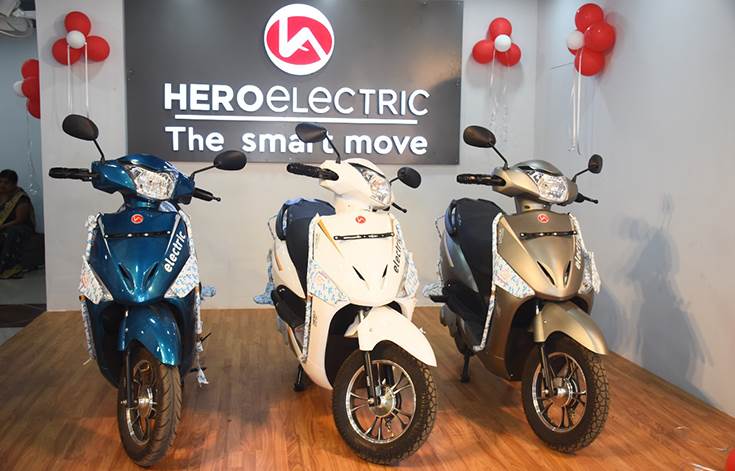 Hero Electric, which is aggressively driving expansion, currently has over 700 sales and service outlets and trained roadside mechanics on EVs. It has also partnered with various NBFCs to facilitate easy finance solutions for EV buyers. It is also actively increasing its EV charging network and has recently tied up with Jio-bp to enable its customers to access the widespread charging and swapping network, which is also open to other vehicles. 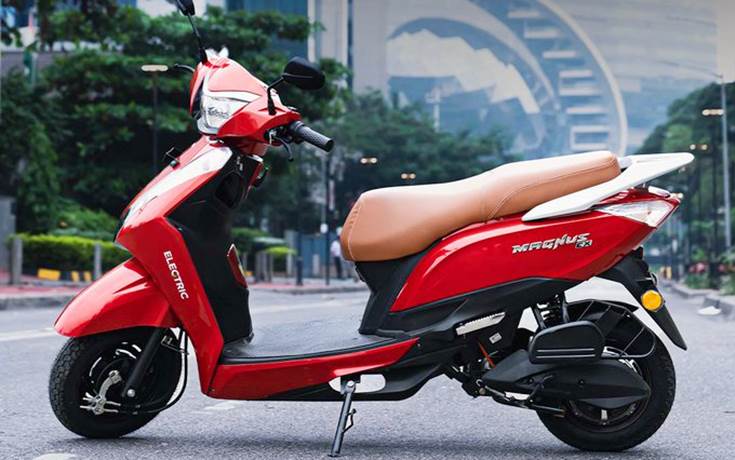 The Magnus EX electric scooter is the main sales driver for Ampere Vehicles.

If there’s been a consistent performer, then it is Ampere Vehicles with cumulative sales of 79,592 units and averaging monthly sales of 6,632 units. This is an improved performance considering it had averaged 5,631 units for the first six months of 2022. The upward movement is thanks to the company recording a new high and five-figure sales for the first time in October (10,064) and its best monthly sales in November (12,257). 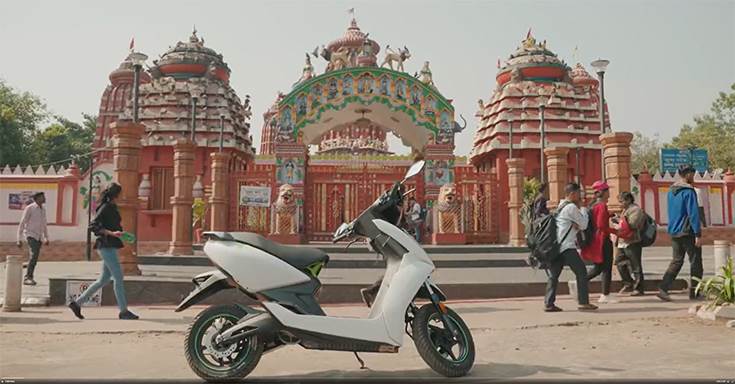 What is helping Ather achieve better numbers is the improved supplies to its showrooms across the country, which has sizeably reduced the waiting period.

On November 23, Ather inaugurated its second manufacturing plant at Hosur in Tamil Nadu, thereby increasing its capacity to 420,000 units per annum, up 250% from the previous 120,000 units.

Ather is also benefitting from its network expansion programme. It has outlined plans to expand from 68 outlets in over 50 cities at present to 150 Experience Centres in 100 cities by March 2023. 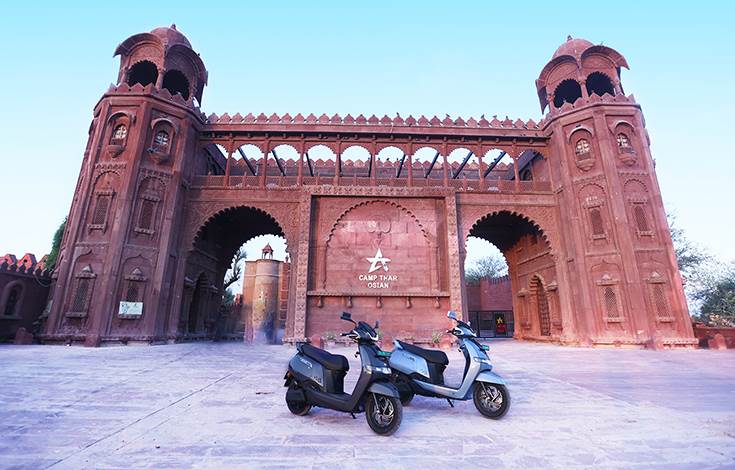 The acceleration in demand for the TVS iQube has come after the rollout of the refreshed iQube in May 2022. BEst-ever monthly sales were in December: 8,720.

Chennai-based TVS Motor Co, with its sole EV – the iQube – is in sixth position with cumulative retails of 46,277 units. Having clocked its best monthly retail sales in November with 8,102 units, its December performance was better at 8,720 units – this is, in fact, the second-best company sales for  last month of CY2022.

The acceleration in demand for the TVS iQube seems to have come after the rollout of the refreshed iQube in May 2022. The zero-emission TVS is priced between Rs 98,564 and Rs 108,690 (on-road Delhi) including the FAME and other state subsidies, for the entry-level iQube and iQube S trims, respectively. In terms of network, the new iQube is available in 33 cities and is slated to reach another 52-odd cities within India. 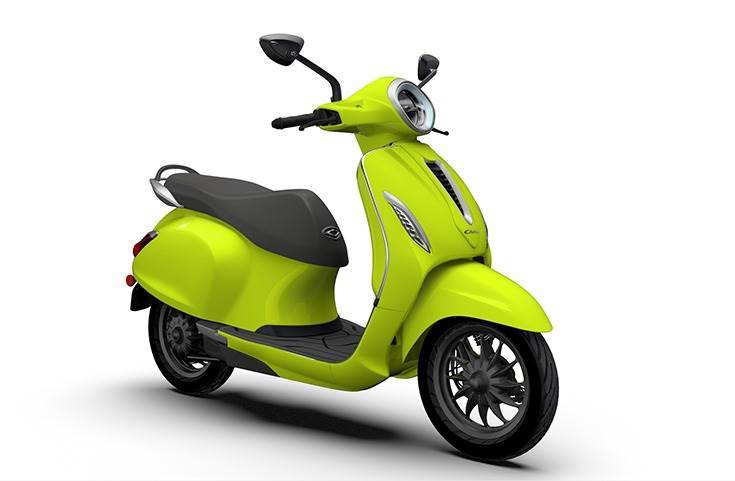 The other IC-engine OEM in the EV market and like TVS with a single EV, Bajaj Auto sold a total of 24,767 units of its Chetak electric scooter. Sales of the Chetak have been restricted due to fewer number of retail outlets compared to the competition, and in some markets like Mumbai the e-scooter is displayed and sold from KTM showrooms. However, that’s about to change in the near future.

Bajaj Auto has announced the setting up of a subsidiary firm called Chetak Technology Ltd (CTL), which will operate the Chetak EV business vertical as a separate entity, focused on design, development and sale of EVs. According to Autocar India, the Bajaj EV will be sold only via a network of exclusive Chetak showrooms across India. These exclusive showrooms will showcase Chetak EVs, facilitate test rides, register bookings and take delivery. The network of Chetak exclusive showrooms will expand by sometime around March or April 2023. In addition, the dealerships will also set up exclusive Chetak service centres to carry out maintenance or repair work on the EVs. 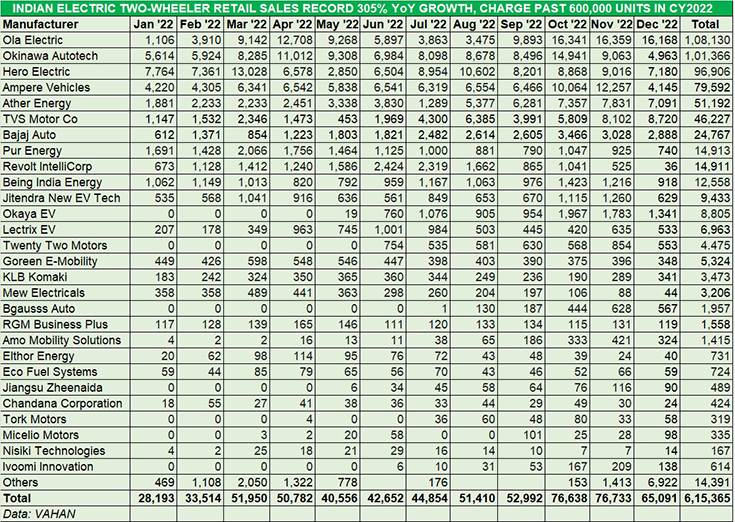 Industry guns for a million units and more in 2023
Overall electric two-wheeler retails would have gone closer to the 650,000-unit mark in CY2022 but for the fact that after two straight months 75,000-plus units in October and November, demand slowed down to 65,091 units. However, that can be put down to the December market trend as consumers prefer to make a new vehicle purchase in the new year.

For this segment of the EV industry, the growth road is open and clear. Along with three-wheelers (335,466 units sold in CY2022), electric two-wheelers are accelerating the charge of the overall sector. What is adding tailwinds to sales of the eco-friendly commuters on two wheels is the high price of petrol (Rs 106.29 a litre in Mumbai) and regular price increases of petrol-powered scooters and motorcycles due to rising commodity and input costs.

Furthermore, what will possibly act as a catalyst to e-two-wheeler demand in CY2023 is that prices of IC-engined two-wheelers will rise from April onwards as OEMs upgrade their technologies and products to meet RDE norms.

Consumers are also set to benefit from more robust products. Following the incidents of e-scooter fires in early 2022 with three OEMs, the government as well as the entire EV industry eco-system is hard at work to ensure top-notch battery and cell management. This is imperative because consumer confidence in electric two-wheelers remains strong.

India is targeting EVs to account for 30% of its mobility requirements by 2030, driven by the FAME scheme, state subsidies and much increased availability of models across segments. Given the current pace of buying in the overall two-wheeler arena – 15.3 million two-wheelers (1,53,07,255 units) sold in CY2022 – that could be still some distance away. CY2022’s 615,635 electric two-wheeler sales constitute 4% of the overall two-wheeler market but the trend is out there loud and clear for everyone to see.

Yes, there are some challenges like high initial product cost but India Auto Inc is fast tackling that. Recognising the huge potential in the electric two- and three-wheeler industry, some leading Indian component suppliers have inked tie-ups with global electric powertrain manufacturers to apply the make-in-India production mantra. Local EV component production will only serve to reduce costs as well as dependence on imports and in turn facilitate affordable EVs on two wheels and more.

It's a hugely exciting time for the EV industry and with the world exploring the potential of India being a global manufacturing hub of quality products and components, the Indian two-wheeler industry could be the purveyor of bigger things to come. Stay plugged into this space for more developments.