Feature-laden Jupiter 125 aims to take the fight to the premium category competition. 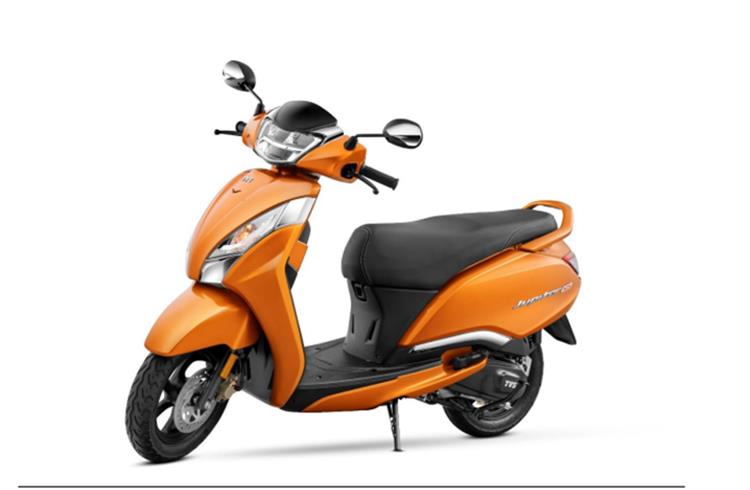 TVS Motor Company has launched a strategic assault on the 125cc two-wheeler market in India. Three weeks after it launched the 125cc Raider motorcycle, the Chennai-based OEM has launched the new Jupiter 125 at Rs 73,400 (ex-showroom Delhi), thereby expanding its Jupiter portfolio.

The Jupiter 125 comes with external fuel fill in the front, side stand indicator and engine inhibitor, all-in-one lock and mobile charger with front glovebox.

TVS claims the Jupiter 125 has the largest under-seat storage of 33 litres and is the first scooter in India to accommodate two full-face helmets. What's more, it has the longest seat in the segment along with increased  front leg space. TVS says the scooter has "exceptional fuel economy" but has not provided specific fuel efficiency numbers. Thje fuel efficiency is a result of the company's Ecothrust Fuel injection (ETFi) technology which offers improved mileage, better startability, refinement, and durability. There's also TVS intelliGO which intelligently switches off the engine during long idling like traffic signals and other transient stops.

Speaking on the company's latest set of wheels.KN Radhakrishnan, director and CEO, TVS Motor Company said, “At TVS Motor Company, we have always focused on four parameters – scooterisation, premiumisation, investing in brands and product innovations. Since its inception in 2013, the TVS Jupiter has been one of the most admired scooters in the country with several first-in-segment features. The scooter customer of today seeks offerings that are aligned to their personal growth. We are confident that TVS Jupiter 125 will be a great fit for such evolving needs.”