An estimated 90 percent of the standard six-airbags equipped vehicle will be inspected for error in ACU software. 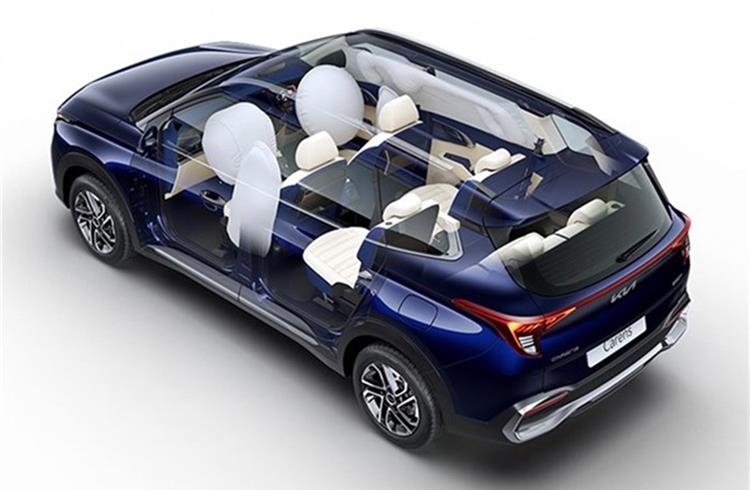 Kia India has issued a voluntary recall of its Carens MPV, launched on February 15, 2022, for a possible error in the software of the airbag control unit (ACU) module. While the company hasn’t specified which production batches of the MPV have been affected by this software problem, it said it would reach out to all affected customers.

A total of 44,174 cars are part of the recall which would entail the company inspecting and fixing any possible error in the ACU software by an update. Kia India has advised affected owners of the MPV to schedule an appointment to rectify this at authorised dealerships. This is the fifst ever recall by Kia India under SIAM's voluntary vehicle recall policy.

“Kia India is committed to provide a superlative ownership experience to its customers by offering an evolved brand experience. The company conducts regular checks and rigorous testing of components, governed by Kia’s global standards. As a responsible corporate, the company has decided to voluntarily recall the vehicles for inspection and if required, a software update will be provided free of cost,” it said in a press statement.

“The company will take utmost care to minimise inconvenience to customers throughout the process of this campaign,” it added.

The Kia Carens comes equipped with six airbags as standard across all variants. The MPV has sold a total 47,722 units between February and September 2022, which means that 92.56% of the total cars sold till end-September 2022 have been recalled by the Korean carmaker for this possible software error.

Total vehicle recalls in India nearing the 5-million mark
Kia India’s recall of the Carens adds to India’s total recalled passenger vehicles and two-wheelers tally that stood at 4.97 million units between July 2012 and July 2022. The voluntary recall practice from OEMs became prevalent after the Society of Indian Automobile Manufacturers (SIAM) rolled out its Code of Voluntary Recall in July 2012. Moreover, the Ministry of Road Transport and Highways had enforced a new Vehicle Recall Policy, that demands OEMs to issue compulsory recall of vehicles subject to certain criterion, from April 1, 2021.

While the total count of 4,978,490 units was shy of the 5-million-units mark by by 210,510 units the 44,174 Kia Carens will reduce the difference by a significant amount. For reference, Maruti Suzuki India had announced a similar recall that affected the ACUs of 166 units of its Tour S fleet-only sedans in August 2022, followed by a recall of 5,002 units of its Super Carry LCVs for a possible seatbelt buckle problem. On September 6, Honda Motorcycle & Scooter India too recalled 84 units of its three premium motorcycles – CRF1100 Africa Twin, CBR1000RR-R Fireblade and GL1800 Gold Wing Tour.