Recreational vehicle comes with multitude of engine and transmission options. 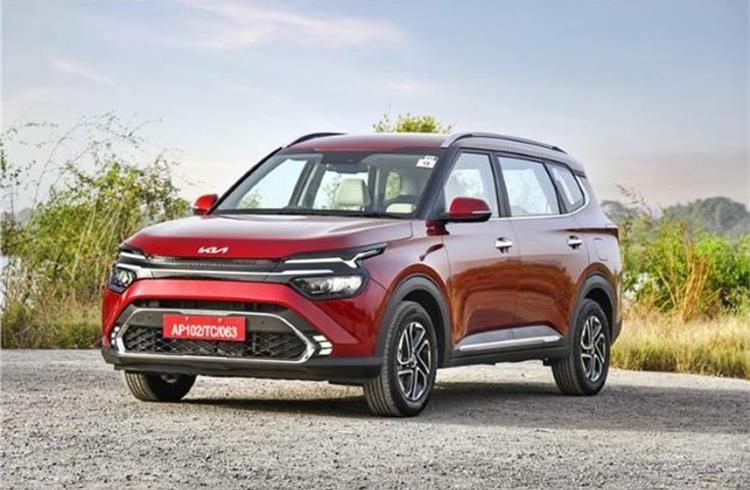 Kia India has launched the Carens with introductory prices ranging from Rs 899,000 to Rs 16.99 lakh (ex-showroom). The Carens is being positioned as a premium six / seven-seater recreational vehicle that comes with a blend of modern styling and features, and gets six airbags as standard.

With its aggressive pricing, Kia has squarely targeted the best-selling MPV in the mass-market segment – the Maruti Suzuki Ertiga – which comes priced from Rs 812,000 to Rs 10.85 lakh (ex-showroom). The Carens also aims to pull buyers away from Ertiga’s plusher six-seat version – the Maruti Suzuki XL6 – which is priced between Rs 10.14 lakh and Rs 12.02 lakh (ex-showroom). The Eritga clocked 114,408 units in CY2021, whereas the XL6 went home to 39,902 buyers during the same period. The duo, therefore, averaged 12,859 units a month for the last year.

The Carens also goes up against the likes of the MG Hector Plus, and its own cousin from the Hyundai Group – Alcazar – both of which are premium offerings and could see buyers cross-shopping between the higher trims of Kia’s latest product in India.

The company has introduced the Carens in five variants with multiple powertrain and drivetrain options. In its entry-level Premium and Prestige trims that come priced at Rs 899,000 and Rs 999,000, ex-showroom, respectively, the Carens is only offered with a six-speed manual transmission, paired with either a 115hp, 1.5-litre, naturally aspirated petrol engine, a 1.4-litre turbo-petrol mill or a 1.5-litre diesel unit.

Automatic transmission choices have been made available to buyers with the turbo-petrol and turbo-diesel engine options from the Prestige Plus variant onward, with the diesel automatic only being restricted to the top-end Luxury Plus six- or seven-seat trims. While the 140hp, 1.4, turbo-petrol gets a 7-speed DCT, the 115hp, 1.5, turbo-diesel comes mated to a six-speed torque convertor automatic gearbox. Fuel efficiency figures for the Carens are claimed at up to 16.5kpl for the petrol models and 21.5kpl for the diesel trims.

The Carens’ USP over its rivals is going to be its plush cabin with a dual-tone theme, and features such as a 10.25-inch touchscreen infotainment system, a full-digital instrument cluster, ventilated front seats and wireless phone charging.

It, however, still misses out on a 360-degree camera, and a panoramic sunroof as the AC vents for the middle row are placed in the roof. The middle row also gets an electric tumble option in the six-seat version for easier accessibility to the last row. Space is also a big strength of the Carens with an additional 225mm wheelbase over its sibling, the Seltos, with which it shares its platform.

While six airbags along with active safety systems like ESC, hill-start and descent assist and tyre pressure monitoring system are being offered as standard safety features, the Global NCAP crash test results for the Carens are currently unavailable.

This becomes an important consideration as the made-in-India Kia Seltos had scored three stars for adult occupant protection and two stars for child safety in the GNCAP crash tests, with its bodyshell being termed as incapable of taking further load.

Kia India has claimed receiving 19,000 bookings for the Carens since they commenced on January 14, and recorded 7,738 units within a day. The company is targeting sales of 50,000 units of the Carens in India in 2022, taking the 300,000-unit production capacity at its Anantapur plant in Andhra Pradesh to complete utilisation.