Volvo Car India's Charles Frump: 'Kolkata is one of the biggest markets for the XC90.' 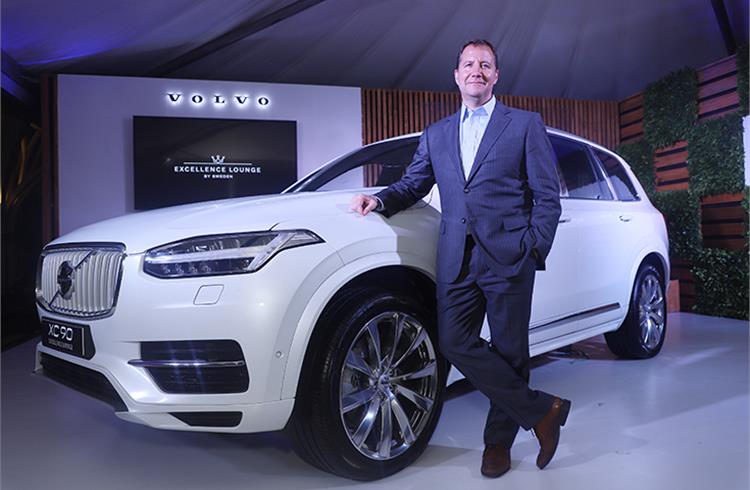 On September 5, Volvo Car India launched the new three-seat XC90 Excellence Lounge edition in India at Rs 1.42 crore. India is also the first country worldwide to get this uber-luxury Excellence Lounge variant of Volvo’s full-size SUV. India is also the largest market to get the top-spec Excellence variant of the XC90 and over 100 units of the luxury hybrid SUV have already been sold here. Charles Frump, Managing Director, Volvo Car India, speaks to Nilesh Wadhwa on the company's product and growth strategy, and why the government should spell out its stand whether it plans to reduce GST.

What is the strategy behind launching the XC90 Excellence Lounge, when you already have the XC90 on sale in India?
I think it takes it to the next level, to really deliver the most luxurious experience for a single passenger. This is really what this car does. Just with the limited 15 units, it's a first pass. It's a global debut.

How did you arrive at just 15 units, and what is the total production for the XC90 Excellence Lounge?
That's a very good question. One of the most important things when you do a limited edition is to have exclusivity and for this kind of customer, we need to have that exclusivity. How many of these cars we want to build was a key question. I was very happy that we did get 15; in fact I think that we may get the lion's share of the cars. I don't know the entire plan but there's the possibility these may be the only cars and it could be because we were very eager to get these cars.

I think the Excellence concept really took off here in India. Being a smaller market for Volvo, that was quite a surprise for the rest of the world. The customers we're targeting with this car really know luxury, more so because they travel the world.

What is the estimated size of the ultra-luxury car market in India?
I have to be honest -- we haven't done the math on this one. I wouldn't even know how to define an ultra-luxury segment. I think this is quite a unique trial for us. There's nothing to compare with and there's no map when you launch something like this (top-spec XC90 Excellence). Just go on faith that you know your customers well enough, your dealer partners and take a shot.

Our dealers are already extremely excited. The difficult part now is we want to understand who these cars are going to. We want them to be our best customers. We are going to be taking them with us to Sweden to show real Swedish luxury -- seeing the Northern Lights, staying in a nice hotel, driving sled-dog snowmobiles, driving on the ice. We are really looking forward to these kinds of things.

Volvo Car India has grown 11% in January-June 2019 YoY, but the volumes have still been low compared to your competitors. There is a huge potential of growth in the segment. How do you plan to address and grow your volumes and your network?
I am, of course, very pleased that we could grow faster than the segment and grow a little bit of market share. Yes, we're still at a very low base and we know who we are and where we are at. But then it's also important to know that this is below our aspirations, like all our competitors. We have had to adjust production and sales forecast just like all the other automakers have had to do. We were able to gain a little share, but we are also feeling the pinch. Our dealers are feeling the pinch but and I think this slowdown is temporary.

If we can get clarity around GST in a reasonable amount of time, now that the holiday season is here, that would be good. I have been in this business for 20 years and this this isn't even in the top five of downturns that I have seen. These things turn around often extremely quickly. I think you will have a better holiday season than expected. There is some pent-up demand and some buyers are awaiting clarity on GST. The government should tell whether it is lowering or not lowering GST. Both announcements will be good -- one way or another. No answer is not as good. So, hopefully, we'll get there and that could trigger some short-term improvements and initial buying and perhaps generate some momentum going into the rest of the holidays.

In FY2019, Volvo Car India recorded 25% year-on-year growth, albeit on a small base. What is that which has clicked with customers that has helped Volvo see growth?
We are building the best products we have ever made. You can drive our cars versus our German competitors, we certainly are competitive or better. Indian customers have responded very well to our designs and the products that we build.

Secondly, there is some development in the luxury market. A lot of luxury car consumers are repeat buyers. Volvo is being viewed as a Swedish alternative to a German luxury car. I think we're gaining a little bit as a result of that.

Thirdly, and very importantly, we have a very good relationships with our dealers. We have now gone through this very difficult downturn together and not lost a single dealer. And that is a big statement right now.We have 16 dealer partners and 25 showrooms. It has not been easy for them.I consider it one of the most important parts of my role here to ensure that our dealers are profitable. Having very good partners has helped us succeed.

How do you see Volvo Car India performance for the remaining quarters of the financial year?
I will be extremely open on this one -- if we see flat growth this, I will be happy with that.

Volvo Cars India sold 100 units of the top-spec XC90 Excellence variant, which is the highest globally. Who are the key customers for this SUV and which are the growth markets in India?
These are very exclusive customers and CEOs of small businesses. Interestingly, one of the biggest markets for the XC90 is Kolkata. Part of this is thanks to the passion of the dealer there. He loves Volvos, he drives them and demonstrates this in the community. It's something of a personal touch. So, now very high-level executives and entrepreneurs in Kolkata are driving this car. We sold more of the top-spec XC90 Excellence SUVs in Calcutta than in any other market.

Localisation is vital if you are to achieve volumes. Are you looking to localise more content for your products? If so, for which models?
As you know, we are quite still rather young company and still growing. We are building dealers, processes and a team. It will only be two years in October since we opened our facility in Bangalore. 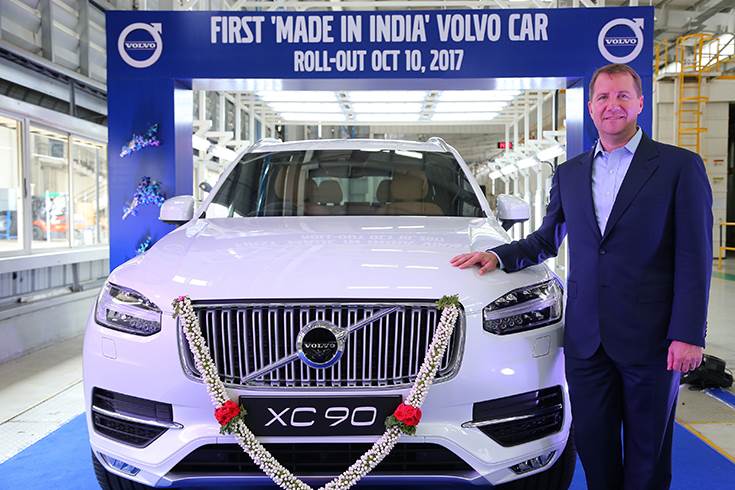 On October 10, 2017, Volvo rolled out its first made-in-India product – an XC90. Charles Frump seen here with the landmark car.

We began with the XC90 and over two years have added the the XE60 and S90. So we've gone from zero percent production/localisation to over 50 percent. I think we are at 60-odd percent for our volumes from the Bangalore plant. We still need to get the XC40 there and we will be looking at that over the next year or two. Getting most are all of our car lines into local assembly is the first step, and then I think we'll start looking at more depth.

Globally, we have not yet announced the first global electric car, fully electric car. But when we do that, we will look to follow it in India very quickly.

For Volvo, Euro 6 is not a new technology. When do you plan to start selling BS VI cars in India? And what would be the tentative price increase?
We are working on the very small details, finalisation and homologation will happen very soon. We will tentatively start selling them this year. We don't want to get too close to the deadline. There is certainly a cost associated with that. How much of that gets passed onto the customer and how much we absorb is still something we need to work out. I think all automotive companies are trying to work that out now. In general, we look at a lot of factors when we go into pricing.