Tata Motors pulls out all stops to drive with new Zest

Under the Horizonext growth strategy, Tata Motors is taking its biggest step so far with the all-new Zest sedan. Sumantra B Barooah reports on what the team has done to achieve success in a fast growing and highly competitive segment. 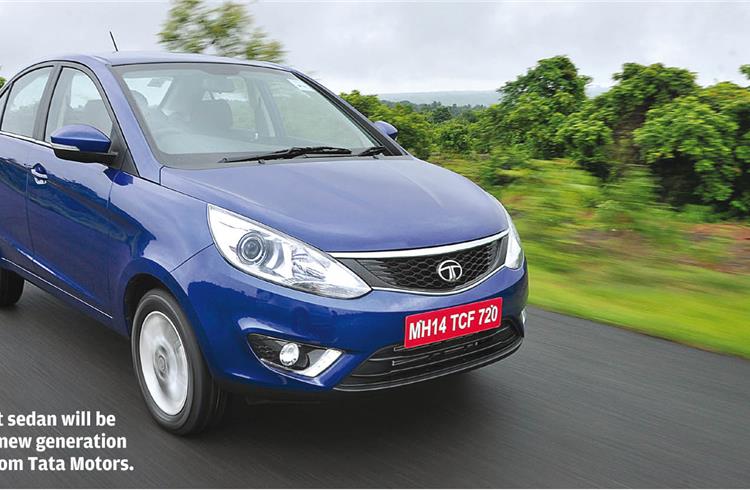 Under the Horizonext growth strategy, Tata Motors is taking its biggest step so far with the all-new Zest sedan. Sumantra B Barooah reports on what the team has done to achieve success in a fast growing and highly competitive segment.

Three years of developmental work including 300,000 hours of engine testing (both in test bed and car) and 1.8 million kilometres of validation. That sums up the humongous effort that the engineering team at Tata Motors has invested into the Zest, an all-new sedan that will be launched next month. In it rides the hopes for Tata Motors to get a comeback of sorts for a company that has struggled in local sales even as its overseas acquisition – Jaguar Land Rover – has hogged the limelight.

The Zest is an interesting example of an OEM’s many strategies executed through a single model. The diesel Zest will make it the first OEM to offer AMT (automated manual transmission). The petrol variant with the 1.2-litre ‘Revotron’-branded engine will be the first turbo-charged engine and its multiple drive mode will be a first in its segment. In addition, the Zest will also mark Tata’s comeback to the petrol segment that has shown an uptick in recent months. “What we are building into our vehicles is different and disruptive,” says Ranjeet Yadav, president – Passenger Vehicle Business Unit, Tata Motors.

I got to experience those ‘different and disruptive’ offerings after test driving both variants of the Zest. For example, while driving the Zest petrol at around 60kph in third gear in south Goa, switching to ‘sport’ mode gave the added thrust to the car and added to the driving experience. In contrast, the ‘Eco’ drive mode is for times when the driver would prefer a relatively sedate and economical drive. The software for the multi-drive modes has been developed by Bosch. Tata Motors claims that the peak torque of 140 Nm @ 1750-3500rpm is “20 percent better than the competition”.

The Zest will compete with Maruti Suzuki’s Swift Dzire and the Honda Amaze. The AMT in the diesel variant, sourced from Magneti Marelli and tuned for Indian driving conditions, can be expected to be appreciated by diesel car buyers looking for automatic-like driving experience. Though I didn’t encounter thick traffic to appreciate the clutch-free driving fully, I did enjoy a good drive in the ‘sport’ mode. The smaller steering (360 mm in diameter) adds to the sporty character.

The driveability and handling of the Zest are quite good. The car’s ‘first-in-segment’ dual path front suspension helps in improving the cushioning of the occupants in rough roads, as I experienced in some road stretches during the Goa drive. The dual-path suspension’s role is to aid the smooth ride without compromising body roll. The 15-inch wheels in the Zest add to the ride quality while also enhancing its aesthetic appeal. 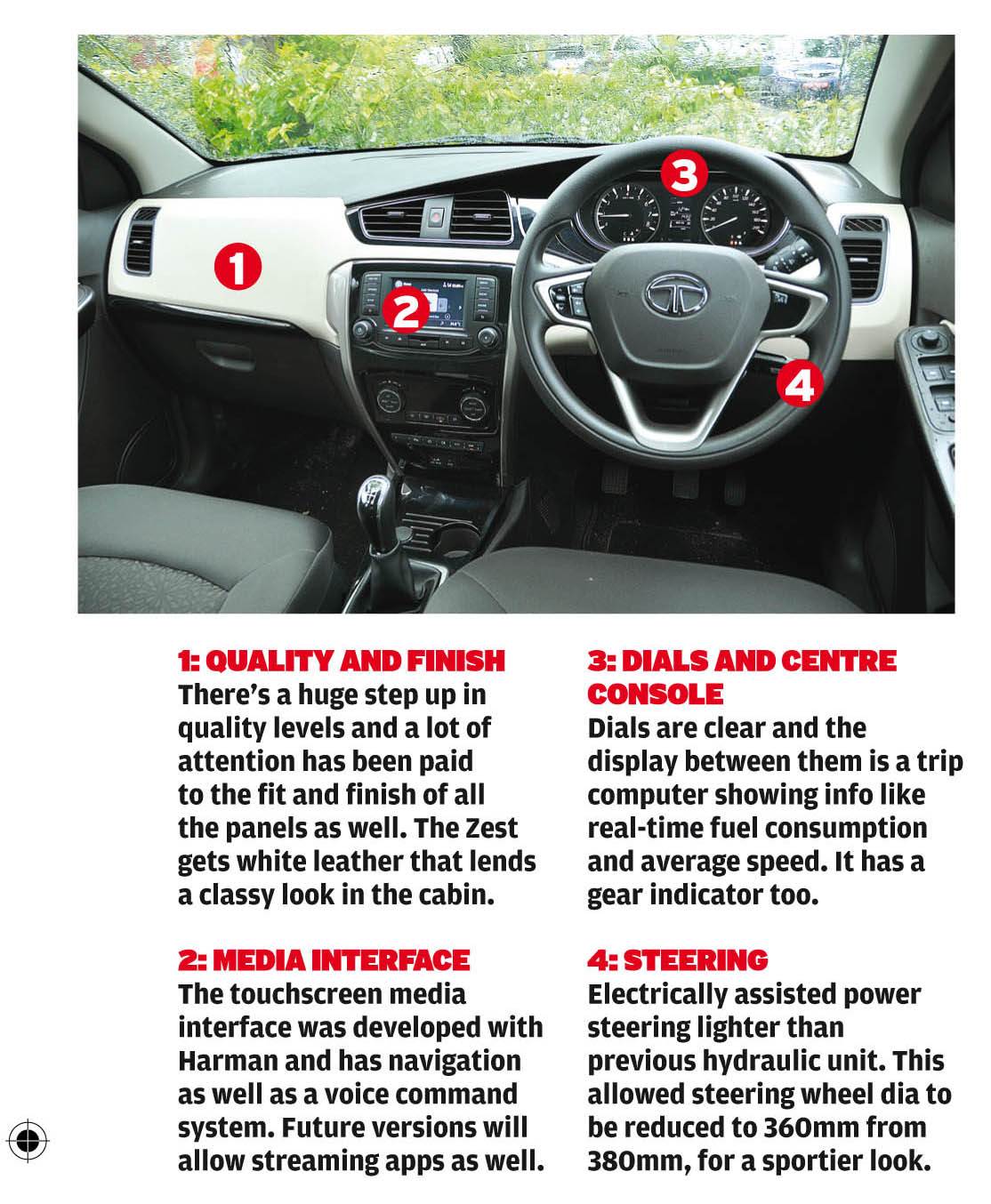 On other fronts, the Zest marks the beginning of a new design language for Tata cars. Pratap Bose, head of design, Tata Motors, and his team worked on a bunch of ideas that would reflect desire as a key attribute. “If you don’t create desire in a customer, regardless of what you do, there’s an issue,” says Bose. As part of the new design theme, the front design cues tries to ‘re-interpret’ Tata Motors’ earlier car designs. In the interior, the fit and finish level has improved significantly from earlier Tata cars. According to the company, the Zest offers the best shoulder- and headroom in its segment.

Like the multi-drive mode function and the dual-path front suspension, there are a few others in the Zest that Tata Motors has added to provide a good value-for-money product. Projector lamps, a touchscreen infotainment system and LED tail-lamps are a few others.

The five-inch touchscreen infotainment system in the petrol variant is a special attraction in the Zest. Developed by Harman, it offers voice recognition, SMS read-outs and fully automatic temperature control. “Such a feature in an infotainment system was available only in high-end cars 3-5 years ago,” says a Harman official. Harman struck a deal with Tata Motors to provide infotainment systems to its range of vehicles. Moreover, it has set up a dedicated facility for the carmaker in Pune.

Overall, the Zest represents Tata Motors’ all out and serious efforts to achieve its goals in the business. It shows an evolution of sorts for the company in the product and quality pillars of Horizonext. For building the other two pillars (sales and service), Tata Motors has upgraded 160 of its 250-strong dealership network. The first set of products – the Zest sedan and the Bolt hatchback are ready – and will be launched in a sequence. “Now, it is sheer execution more than anything else, which is the focus,” signs off Yadav. 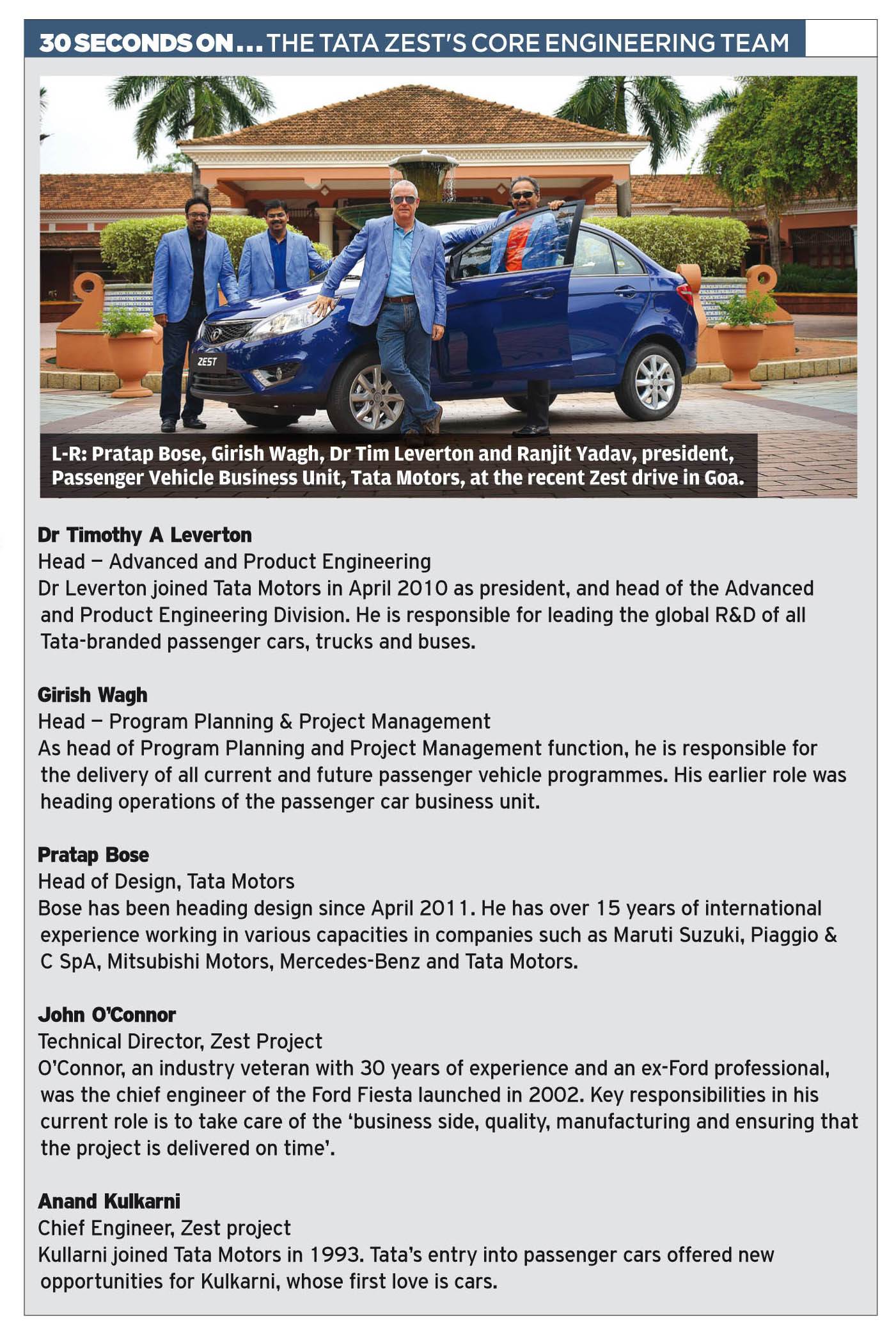