The global supplier, which displayed its BS-VI-compliant engine components at the 2016 Auto Expo in New Delhi, is already working with OEMs in India to be future-ready. 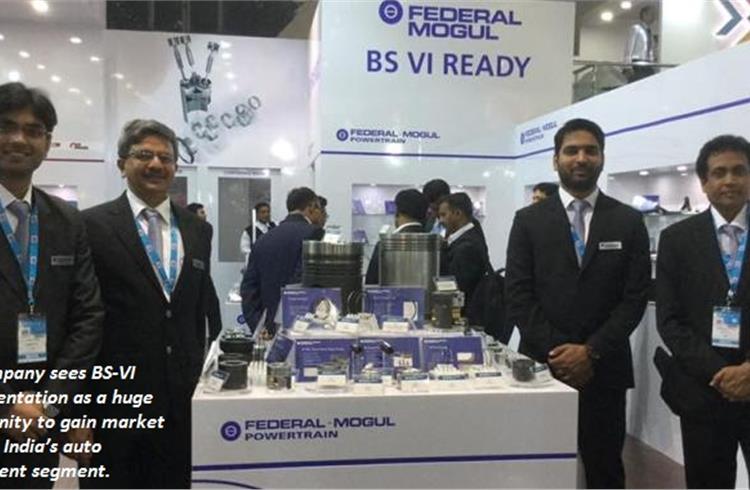 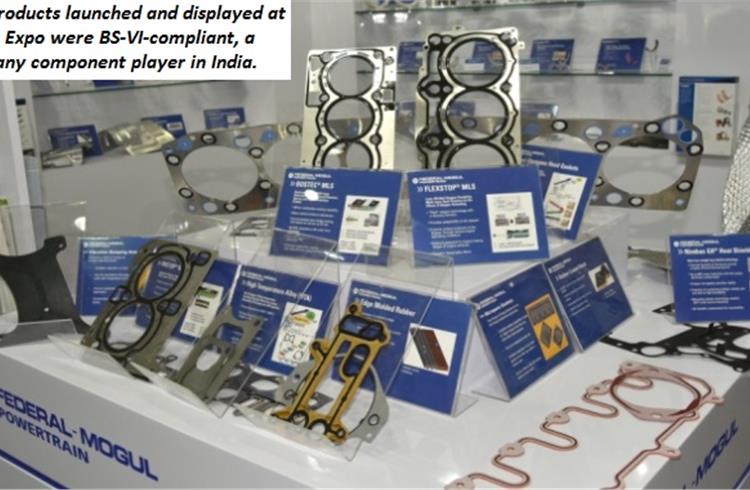 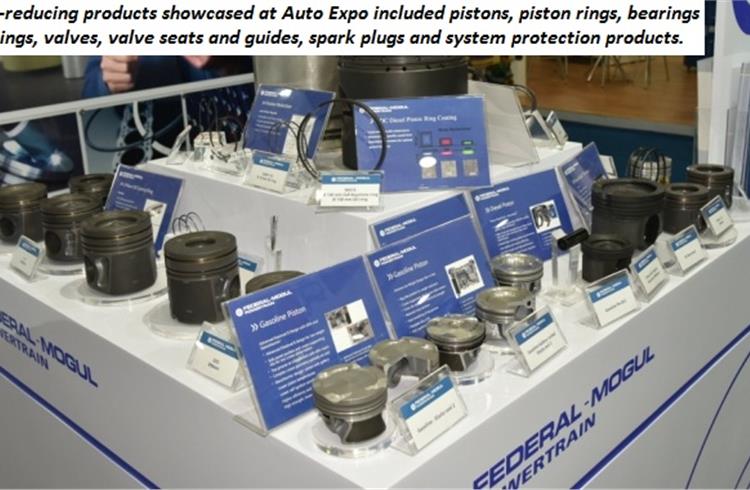 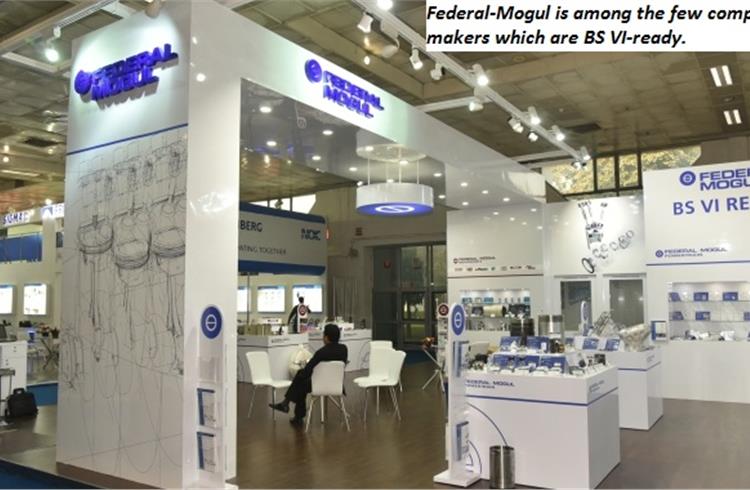 As a result of the Ministry of Road Transport and Highways (MoRTH) announcing an ambitious roadmap to transit from BS-IV to Euro 6 emission norms by 2020 to make vehicles more eco-friendly, both vehicle manufacturers and suppliers are actively engaged in taking up the challenge.

For some players like Federal-Mogul, the upgrade is proving to be a huge business opportunity and it is already making speedy moves towards that end.

It can be revealed that Federal-Mogul Powertrain, which displayed its BS-VI compliant engine components at Auto Expo 2016, has commenced development work with some OEMs in India on new engine projects.

Ideally the component development cycle kick-starts 36 months prior to the vehicle launch with the engine parts maker brought in at the design stage and thereafter works in close sync with engine manufacturers. Federal-Mogul Powertrain is currently producing many of the Euro 6 engine parts in Europe and for comparable engine standards in North America. In India, these components will meet the demands of both the passenger car as well as heavy-duty vehicle segments.

“Demand from customers revolves around reducing CO2 gases, lowering friction and downsizing of engines – both petrol and diesel engines,” Vinod Hans, who was recently elevated as the managing director of Federal-Mogul Powertrain India, told Autocar Professional in an exclusive interaction. “A number of customers are moving towards turbocharging, which would mean working in an environment that can sustain higher pressures and higher temperatures for components by cutting down contact area and size.”

This is the latest trend in the global shift towards turbocharged engines which are necessitated by engine downsizing as components become lighter and need lesser space in the vehicle, thereby making it more compact and fuel efficient.

To reduce friction, component weight has to be trimmed by working with lighter alloys. The company claims these alloys are the kings of technology and vary from engine to engine. In some applications, the OEM requires friction to be lowered by 10 percent while in others, friction is cut by as much as 20 percent depending on the technology adopted.

Hans says their contribution is around 8-10 percent in terms of cutting friction in the full chain. “It is for the OEM to see how the other components are integrated into the system. Global OEMs know us and have already tested solutions with us.”

Federal-Mogul’s role in the value chain is to develop parts, submit them and undertake local testing. 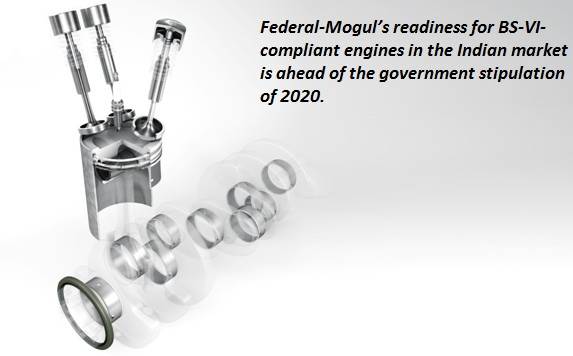 The company is reticent about revealing statistics but maintains that in India it sees the market evolving for its engine components. Over the past two years, the company has invested in meeting Euro 6 emission technology in the country, something which will give it a first-mover advantage. Its Auto Expo product display was meant to showcase just that through sealings, spark plugs, valve seats and guides, bushings, bearings, pistons and piston rings.

Going forward, its investments in India will be undertaken on a regular basis in various streams of business including manufacturing and capacity expansion.

The company is currently working on identifying the technologies suited for India, defining the level of investment needed for implementing them and outlining the customer’s requirements. “In the next 1-2 years, we will be bringing new technologies and commercialising them in India,” reveals Hans.

The JVs are to combine Federal-Mogul’s technology, R&D capabilities, global customer relationships and advanced manufacturing operations, with Anand’s vast local customer and supplier base as well as expertise in human resource management and development.

Thanks to its longstanding strategic partnership with Anand India for several decades, Federal-Mogul Powertrain today has established itself as a leading supplier of bearings in India. This expansion into sealing products is part of its strategic plan to further strengthen its position as a supplier of engine components in the country that it views as a key and growing market.

Similar to the existing bearings JV, Federal-Mogul Powertrain holds the majority stake of 51 percent in the new sealing joint venture (gasket business) while Anand along with smaller shareholders, retains the balance 49 percent. Anand, meanwhile, holds a majority stake in the piston ring joint venture, Anand I-Power. This agreement is to create a platform for the businesses to compete both locally and globally, and increase market share going forward.

At the time, Anjali Singh, chairperson of the Anand Supervisory Board, had said, “With Federal-Mogul Powertrain being a global leader in the engine parts business, this partnership will help the three JVs offer state-of-the-art technology and best practices to all automotive and industrial engine OEMs in India. The main aim of this strengthened JV between Federal-Mogul and Anand is to help attain leadership positions for these three businesses in their respective product lines and improve its value offering to all of its stakeholders.”

The association between the two companies began in 1978 with the inking of a joint operation to set up an engine bearings manufacturing facility at Parwanoo in Himachal Pradesh. Since 2008, the company was known as Federal-Mogul Bearings India. Anand has already developed Parwanoo as an important hub with five of its Group companies having a manufacturing footprint there. Fast forward to the present.

Bringing the best tech to India

Federal-Mogul Powertrain, which ranks among the top three gasket suppliers worldwide, is working on a growth strategy that includes identifying technologies suitable to introduce to India. “We will bring to India the top technologies existing in different parts of the world, depending on what is needed here,” adds Janice Maiden, senior VP and GM – Sealing and Gaskets and Systems Protection, Federal-Mogul Powertrain.

Globally, technologies revolve around engine management systems, multiple layers of steel gaskets that can withstand higher compression and higher pressures as well as higher temperatures in the engine and provide higher stability to the engine block.

The component supplier is almost complete in terms of its new product portfolio in India. Last year Federal-Mogul Powertrain acquired a stake in TRW’s valve division globally and renamed Federal-Mogul Global ValveTrain. Being a new product stream, it is now being introduced to India with the company in talks with prospective OEMs for business. Also being launched are sealings which, along with the valvetrain, are BS-VI ready.

Initially Federal-Mogul had adopted the import route for its sealings and bearings in India; after achieving sizeable volumes, it commenced local manufacturing. It is exploring a similar direction for valvetrains. Several of its global plants manufacture valvetrain components and the company is exploring the possibility of procurement from the commercial and logistics standpoint. “We have a plant in Thailand and we will take advantage of our proximity to it as well as the Free Trade Agreement that India has with Thailand to see how it best fits in with the system,” says Hans. 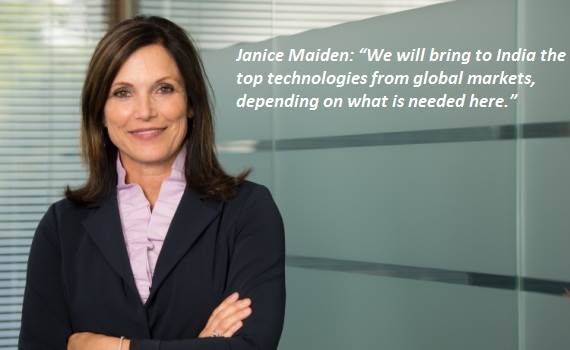 Using the Thailand plant as an introductory base, Federal-Mogul plans to reach the threshold numbers in India before it explores local manufacturing of valvetrains. It took the company 2-3 years to locally assemble bearings and sealings but company officials maintain that each product has a different behaviour and requirement for indigenisation.

The valvetrain will be imported in fully built-up form and supplied to engine manufacturers for assembly. At present, Federal-Mogul already supplies valves to the aftermarket in India and will now enter the OEM segment with this product. Meanwhile, Federal-Mogul Motorparts has added some additional products for the aftermarket like Ferodo Eco-friction braking products for two-wheelers and three-wheelers. These braking products will also be available across heavy and light commercial vehicles and cars.

“The Ferodo advanced technology products are the only environmental-friendly, non-asbestos braking products available across all vehicle segments in the Indian aftermarket,” claims Sanjeev Singh, director – Aftermarket, Federal-Mogul India. Among the new components to be launched in the aftermarket will be Goetze engine valves for the HCV segment under the Goetze brand. This, the company claims, will make it the only independent aftermarket parts provider in India to offer a complete engine solution to its customers. Valves will be a complementary product line.

In India close to 90 percent of the aftermarket as well as OEMs currently use asbestos lining in brake pads. Citing itself as an asbestos-free company, Federal-Mogul has started these supplies for brake pads and brake linings, first with the CV sector, in the aftermarket.

In the last couple of years, it extended the non-asbestos brake pads for the light commercial vehicle segment as well. It has recently also launched asbestos-free braking products for two- and three-wheelers. About 25 percent of the company’s revenue in India comes from the aftermarket.

The company’s valvetrain offerings include a range of inlet and exhaust valves, tappets and cotters for all engine types and sizes including light, medium and heavy-duty applications. The company’s sealing solutions enable customers to meet high cylinder peak pressure facilitating low bore distortion.

While local manufacturing of the valvetrain is still some time away, a couple of options across the country are under the scanner as Federal-Mogul has 7-8 plants in the country.

Going forward, company officials believe that while OEMs will increasingly explore electrification and hybrid drives, internal combustion engine technology is here to stay and the majority of the powertrains in the years to come will be based on it. 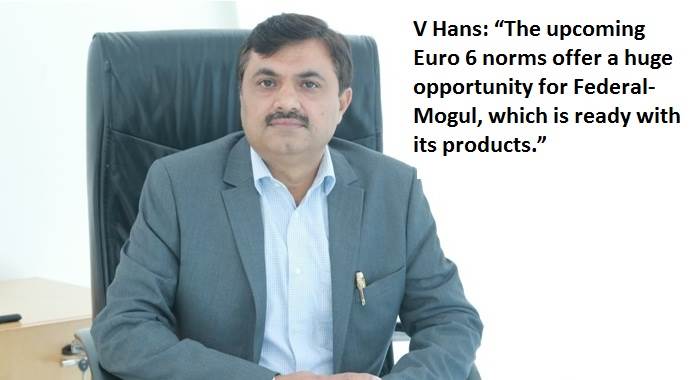 What is Federal-Mogul’s future roadmap in India?

Our immediate priority is to grow the business here, having made multimillion dollar investments here across our existing products. We have also entered into a new partnership with the Anand Group. There is an immediate opportunity to take advantage of the Euro 6 emission norms which are coming in 2020. They offer a huge chance for a company like Federal-Mogul which is ready with its products; we will support our customers as and when they want.

Which are the opportunities you perceive and how will you tap them?

Actually, our strategy is very simple. We have to communicate seamlessly with our customers on the options that we can support them on, for instance, on Euro 6 emission norms. We have solutions that are readymade which can be just transferred from our technology base. Then there will be a programme to fine-tune these technologies for the Indian conditions.

You have an R&D centre in Bangalore. What is the kind of work that you undertake there?

There are several areas starting with testing capability which we have and also several simulation programmes. We have a team of engineers who work here and support some of the programmes for Europe. Bangalore is an IT hub and we are not behind in it.

We have products like pistons and piston rings, bearings, sealings, a different test criteria and test labs for testing them.

In which areas do you outsource technology from India?

This is in some areas where our global centres want backend analysis to be undertaken on some of the simulations.

We are supporting some of our global programmes from Bangalore. Not that we are exporting technology; for example, if some process has to be carried out and our technology centre in Europe thinks that probably it can be done in Bangalore, we undertake it.

Basically, we have to allocate resources and expertise for the project.