Go Green also has an electric two-wheeler for rural India and claims to be the first to do so. It comes with luggage-carrying capabilities and double-seat option. 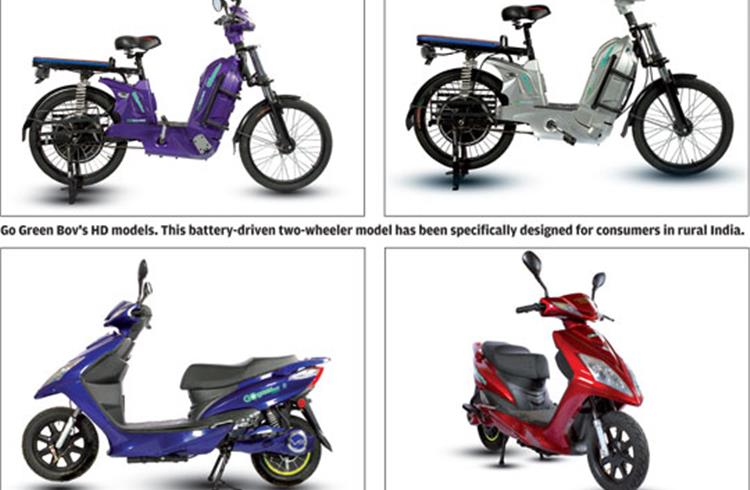 Go Green Bov, a late entrant into the electric two-wheeler segment in India, is all charged up with plans to undertake expansion operations to meet the growing demand for its vehicles. It is also on the verge of closing tie-ups with around four foreign electric vehicle component manufacturers to produce components in India.

Within two years of launching its battery-operated scooter, the Bangalore-based Go Green Bov says it has been able to penetrate into five states. Encouraged by customer response and burgeoning demand for its products, the company now plans to set up a new manufacturing facility. And, given that the Centre unveiled the National Electric Mobility Mission Plan 2020 (NEMMP) earlier this month, it believes the time is just right to implement the expansion programme.

Talking to Autocar Professional, Dhivik A, executive director of Go Green, says: “There is a bright future ahead for EV makers on the back of NEMMP. Our company has prepared a road map to use this opportunity.”

Currently Go Green’s battery-operated scooters are available in five states including Karnataka, Andhra Pradesh, Tamil Nadu, Kerala and Goa. So far, the company has restricted its reach to these states as it has limited production capacity at its existing manufacturing facility in Srinivaspur in Karnataka, where it rolls out around 700 vehicles a month while demand stands at 900 vehicles. A considerable mismatch.

Go Green has identified 64 acres of land in Bangarpet, 130km away from Bangalore, to set up its new manufacturing plant which is expected to go on stream in April this year. Initially, the company plans to manufacture around 1,100 vehicles a month. Plant capacity will be increased to 2,400 vehicles a month over the next 12 months.

The aim is to build the new facility as an integrated eco-park to house the manufacturing plant for electric two-wheelers and also separate units to manufacture components like the battery and controllers.

“We are also in the process of setting up an Industrial Training Institute (ITI) in the integrated manufacturing complex as students will be given free training in the manufacture of green vehicles,” says Dhivik.

Go Green also has an electric two-wheeler for rural India and claims to be the first to do so. It comes with luggage-carrying capabilities and double-seat option.

This vehicle, says Dhivik, is quite popular with among milk-carrying vendors. Small vendors are now showing interest in using this model as they can carry more luggage, he claims. He reveals that the company is preparing to launch three new models in March this year; two of these models have the high-speed specification of 55kph.

That’s not all. Go Green is also working on developing specialty vehicles and a three-wheeler and aims to launch these by the next fiscal. Dhivik says the company has received export enquiries from Brazil, Philippines and Sri Lanka but the focus is currently on meeting domestic demand.

At present, Go Green vehicles have around 45 percent of local content, of which 25 percent of the components including frame, wiring harness, bulb holders and battery management system are manufactured by the company itself while the remaining parts like tyre, charger, and shock absorbers are sourced from domestic component makers. Fifty-five percent of the components including the motor, controller, battery and a few exterior parts are imported.

Now the company is working to manufacture the battery and controller on its own with technology tie-ups with foreign players. Once this happens, Dhivik says the local content in the company’s vehicles will increase to 75 percent. The company is in talks with a Korean company to manufacture batteries and is eyeing an option to produce controllers through a tie-up with a German firm. It is also negotiating with Chinese and Japanese companies to set up manufacturing units for chargers and shock absorbers respectively, says Dhivik while declining to identify these prospective partners.

Funding for the expansion

All these units will come up in the integrated manufacturing complex that would be established in Bangarpet with an investment of Rs 110 crore. Of this amount, more than 55 percent will come from Go Green while the remaining funds will be pumped in by its joint venture partners.

The company’s joint venture plans for manufacture of different components is expected to take shape in the next fiscal in a phased manner. First, the company will set up its new two-wheeler manufacturing facility and later the JV units will come up in the complex, he points out.

Starting from 2013-14, the company has decided to take its vehicles to new markets like West Bengal, Bihar and Uttar Pradesh in addition to covering the North East belt.

Dhivik says, “There are a lot of dealership enquiries from these regions. We were waiting for the right time to expand our reach. Now we will undertake a major dealership expansion as we can supply an adequate number of vehicles with the proposed new manufacturing plant coming into stream in the next fiscal.”

The company plans to increase its dealership network to 800 in the next five years from the current 164 dealers. “When we expand our presence across India, we expect to have demand for around 1,700-2,000 vehicles a month” he adds.

Recalling the company’s initial years, Dhivik says Go Green was set up in 2008 and launched its first scooter in 2010. At first, it used to import Completely Knocked Down (CKDs) kits from China, Germany and Japan and assemble them at its 14,000 square feet factory in Jigini industrial estate near Bangalore. At the time, assembly capacity was only 75 scooters a month. Later in 2011, it shifted its manufacturing operations to Srinvaspur where the existing production plant is spread over one-and-a-half acres.

The company aims to increase its market share in the electric two wheeler segment in India from the current 6-7 percent to 20 percent in the next two years.