Scooter sales register negative growth for the first time in a decade. 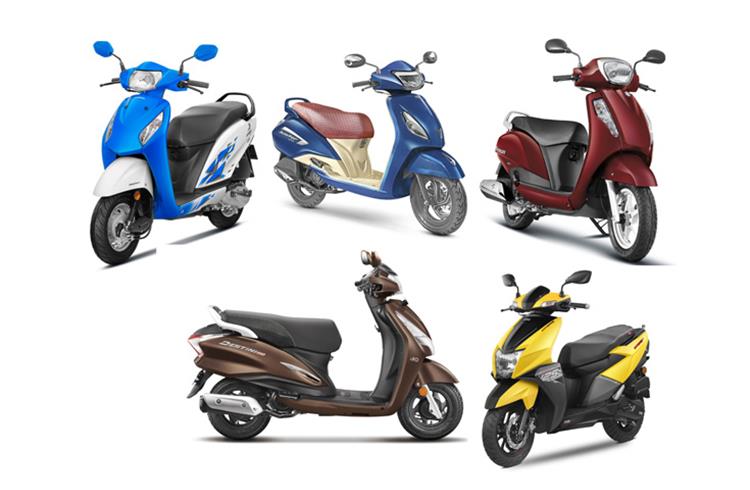 A combination of factors like high insurance premiums, rural market distress in the middle of FY2019, liquidity crisis and overall poor consumer sentiment saw the scooter market feeling the pressure of slowing sales for the first time in a decade. Even market leader Honda Motorcycle & Scooter India (HMSI), which sold 3,680,403 units (-3.69%) was not spared and the company saw its market share drop to 54.92 percent in FY2019 from 56.87 percent in FY2018.

The only ones to keep their heads above water were Piaggio Vehicles, Suzuki Motorcycle India and TVS Motor Co.  Piaggio sold 77,7775 units, up 14 percent to marginally grow its scooter market share to 1.16 percent. The two companies which have made smart gains are Suzuki and TVS Motor.

Suzuki sold a total of 615,520 units, which constitutes a YoY increase of 46 percent, which translates into a market share of 9.18 percent compared to 6.27 a year ago. What is helping the company is the sustained demand for the Suzuki Access 125. The Japanese company’s turnaround efforts are finally visible as it continues to work not only on its product portfolio but also on the dealer development side. The consistent and linear growth in the demand for the Suzuki Access 125 is to be attributed for this achievement along with the company’s expanding reach across the country. This is a first for Suzuki as well as the Access 125 scooter in at least the past eight years or more.

TVS Motor Co, which is the second biggest scooter player in India with a market share of 18.52 percent, sold a total of 1,241,366 units, which marks 13 percent YoY growth. Consistent demand for its Jupiter, the longstanding No.2 best-selling scooter in India, has given a fillip to TVS’ growth. Younger sibling, the NTorq is also turning out to be a popular buy.

Growth outlook
Given the current market situation, apex industry body SIAM has forecast 5-7 percent growth for the two-wheeler industry in FY2020. This means the single-digit growth might persist for scooters in the new fiscal. However, OEMs are optimistic that demand will return.

Speaking at Autocar Professional’s Two-Wheeler Conclave 2019 last month, Malo Le Masson – Head, Global Product Planning, Hero MotoCorp, said: "Buyers are going to change. Scooters are benefiting from urbanisation and the growing number of women riders. Urbanisation is driving growth and fueling premiumisation. Fifty percent of the volume increase in the scooter segment is through women buyers." He was highlighting the growing trend of 125cc scooters which are outpacing the growth in the 110cc segment that currently rules the scooter market.

Nikunj Sanghi, director, International Affairs and past president, Federation of Automobile Dealers Association (FADA), added, "With a large number of young people coming into the working age, two-wheelers will be the only mobility solution. Although scooterisation is undergoing a temporary blip, it will always have the potential to drive the mass market. I accept that in this male-dominated economy motorcycles largely drive sales, but with an increasing number of women in the workforce, the scooter segment can stand at par with the motorcycle segment in India. Demand for scooters will soon return.”