Last month’s best-selling UVs in India are dominated by Hyundai Motor Group vehicles. While Hyundai has the Venue and Creta, Kia's first model for India – the Seltos – debuts in the Top 5 chart. 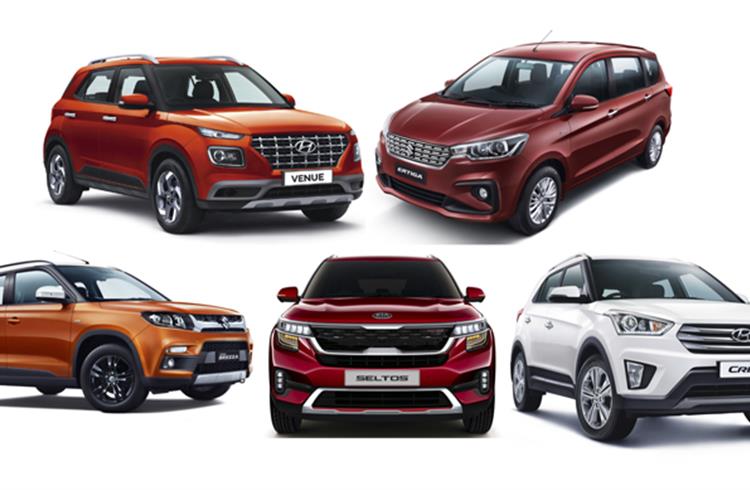 The Venue, Hyundai’s first-ever compact SUV, has given the company a new charge. The Venue, which wrested the UV crown from the longstanding leader, the Maruti Vitara Brezza in July 2019, stays India's utility vehicle  boss for the second month in a row.

The Venue, which was launched on May 21, continues to make brisk progress and saw despatches of 9,342 units in August 2019. This takes cumulative sales of the Venue till end-August to 34,739 units comprising 14,820 diesel and 19,919 petrol, which constitutes a diesel:petrol ratio of 42.66:57.33 percent and is reflective of the consumer shift to petrol. On July 30, Hyundai Motor India announced it had crossed the 50,000-unit bookings mark for the Venue. As per industry sales data, the company despatched 7,049 units in May, 8,763 units in June and 9,585 units in July.

It may be noted that Autocar Professional had, on August 15, forecast the Venue becoming the UV boss in July. Given that most of the remaining 16,000-odd bookings in hand and new ones received since then translate into deliveries, expect the Hyundai  Venue to stay on top of the UV chart for some time.

The Maruti Ertiga MPV, the new No. 2 in July, maintains its position in August with 8,391 units. The Ertiga in its new avatar is going places. With its modern design, ample space, thoughtful features and a value-for-money package, the new Ertiga is ticking most of the right boxes for family and fleet buyers.

A total of 42,127 Ertigas – 22,035 diesel and 20,092 petrol – were delivered in the first five months of FY2020, averaging 8,425 units a month. Maruti Suzuki’s MPV is setting a good pace and that too in depressed market conditions. Compare the sales performance of the year-ago period and the new Ertiga shows a handsome YoY growth of 82 percent (April-August 2018: 23,151). Little wonder then that UVs were the sole segment for Maruti to be in positive territory in August 2019 (3.1%).

Meanwhile, the recently launched Ertiga-based XL6 MPV, available only in petrol, sold a total of 2,356 units.

In third place is the Maruti Vitara Brezza, which has improved its performance in August 2019 with 7,109 units. It may be recollected that in July 2019, the Brezza had recorded its lowest-ever monthly sales (5,302 units) right since launch in March 2017. With increasing competition from newer rivals like the Hyundai Venue and Mahindra XUV300, both of which are also available with petrol engines, and no petrol engine option yet in a market making a strong shift from diesel to petrol, the Brezza's slowing numbers have allowed a new challenger to claim the top spot.

However, Maruti Suzuki is currently in the final stages of readying a petrol-powered Vitara Brezza for the Indian market. The current-gen Vitara Brezza SUV has been on sale since 2016, with just a single diesel engine option mated to either a 5-speed manual or an AMT gearbox. Autocar India has reported a few months ago about Maruti developing a new petrol-powered Vitara Brezza, and also confirmed that the model will see its market launch in February, mostly likely at the upcoming Auto Expo 2020.

Kia Seltos checks in
Kia Motor India’s first product – the Seltos – has made a strong entry into the Top 5 UVs list in the first month of its launch. The Seltos, which was officially launched in India on August 22, sold a total of 6,236 units last month, giving the company a Utility Vehicle market share of 1.72 percent. Kia Motors India, which got 6,046 bookings on a single day when online bookings opened on July 17, currently has over 35,000 bookings in hand and is aggressively driving production at its Anantapur plant to meet the surging demand for its first made-in-India product.

The Seltos is currently produced from two of Kia’s production facilities – in Anantapur District, Andhra Pradesh, India, and in Gwangju, Korea – and has gone on sale in both countries last month. With 6,236 units sold in its first month of sale in India, the made-in-India Seltos has outsold the made-in-Korea Seltos, which saw retail sales of 6,109 units – a difference of 127 units.

Rounding off the Top 5 UV chart is the Hyundai Creta with 6,001 units in August 2019, down on the 6,585 units in July, and considerably less than the 8,334 units in June 2019. Creta sales have been slowing for some time now and it looks to have been impacted by the newest SUV in town, the Kia Seltos. The Hyundai Creta has been on sale for four years now, although it has been upgraded through the years with refreshed styling and more equipment – which is why Hyundai India plans to launch of the all-new Creta next year, when it completes 5 years in the Indian market.

Even as the overall passenger vehicle segment struggles, and was down 31.57 percent in August to 196,524 units, and cars down 41 percent to 115,957 units, it is the UV segment which is showing signs of returning into growth mode with sales of 71,478 units (-2.20%). In fact, they accounted for 36 percent of total PV sales, quite a new high. The new  model launches  clearly are helping this positive movement. Will September, which sees the opening of the festive season in India, be the harbinger of improved sales? Watch this space. . .