October, which had Dhanteras, Navratri and Diwali in it, saw the PV segment return to the black after 11 months. With the new S-Presso, Maruti now commands eight of the top 10 spots, even as India’s best-selling UV, the Kia Seltos, checks in. 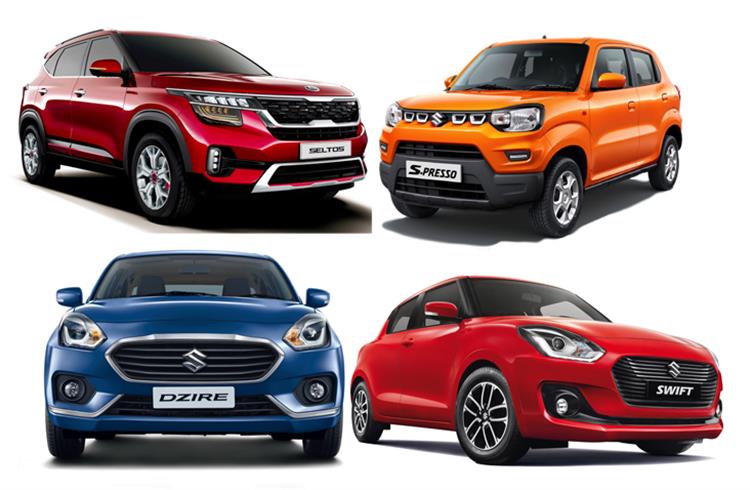 Market leader Maruti Suzuki India, which despatched 139,121 PVs (2.33%) and always has had the stranglehold on the Top 10 chart with its usual stable of seven PVs, strengthened its grip even more with eight ranks. Its newest vehicle – the Maruti S-Presso 'mini SUV' as the company calls it – has broken into the list within a month of its launch on September 30. Maruti, however, is not alone in this achievement. Kia Motors India’s Seltos, which is the new No. 1 utility vehicle in India, has also debuted in the Top 10 PV list. Here’s taking a closer look at the 10 bestsellers.

Maruti’s premium hatchback, the Baleno with 16,237 units is at fourth place, but down two ranks over last year (18,657 / -12.97%). Maruti’s arch rival Hyundai Motor India could only make its presence felt in this list with its premium counterpart to the Baleno, the Hyundai Elite i20 hot on the heels of the Japanese car and giving it a tough fight through its class-leading quality and feature list. The Elite i20 gained one position to No. 5 and sold 14,683 units last month (13,290 / +10.48%).

The Kia Seltos SUV storms into the Top 10 PV list for the first time, taking seventh place with sales of 12,786 units, its best performance in three months since launch on August 22. The popular SUV has seen sales grow month on month, enough to help it wrest the No. 1 UV title in October 2019.

The newest Maruti in town – the S-Presso – also joins the bestseller list with sales touching 10,634 units, enticing buyers with its quirky styling, funky space, oodles of space and a dollop of modern features. The S-Presso comes also comes with the option of AMT in its top two trims. The S-Presso has replaced the Maruti Celerio from the list, which is now a five year old model and is due for an update.

The Vitara Brezza in its diesel-only avatar managed to garner sales of 10,227 units, albeit sliding to the penultimate spot (15,832 / -35.40%). With Maruti Suzuki having announced its plan to exit the diesel game after April 2020, Brezza sales have been under pressure. The crossover is expected to regain its lost crown once a petrol-powered variant is launched next year.

Now that the run up to BS VI norms has actually begun with less than five months to spare, it would be interesting to see how the Top 10 list pans out in the near future, with Maruti Suzuki already taking giant steps in advance and making a bunch of its models BS VI compliant, which contribute to close to 70 percent of its sales already.