With estimated sales of over 800,000 units in April-June, the best yet since Q1 FY2019, the Indian passenger vehicle industry could surpass the previous best of 3.3 million units in FY2019. 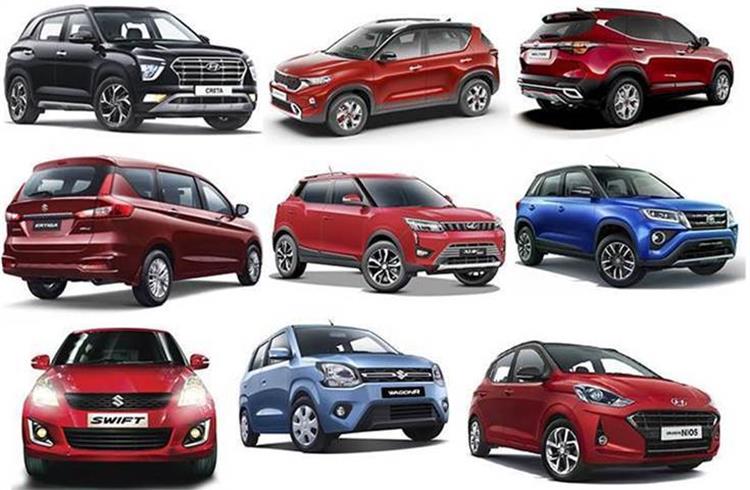 July has dawned and brings with it the happy tidings of strong wholesales numbers from passenger car manufacturers, both in June and for the first quarter (April-June) of the fiscal year.

It’s the cause-and-effect relationship – a marked easing of supply chain issues, which have vexed OEMs for the past two-odd years, and enhanced reliability in availability of semiconductor chips means assembly lines are humming and dealer showrooms getting their share of what they – and the customer – want. What’s not to like? 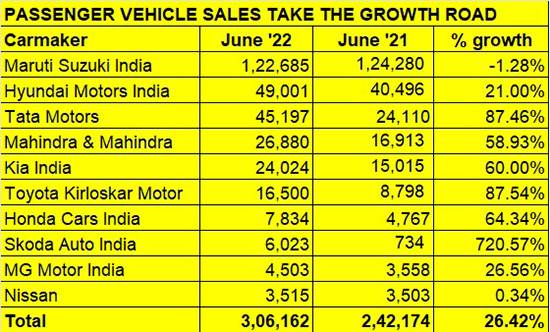 The June 2022 sales numbers as announced by 10 of 16 PV manufacturers indicate cumulative wholesales of 306,162 units, which is a strong 26% year-on-year growth. Importantly, this 10-OEM tally betters the total PV industry sales of 231,633 units in June 2021 by 32%. Here’s looking at how the top carmakers fared last month

Nonetheless, the flush-with-SUVs market can be unforgiving to production gremlins and Maruti saw sales for its clutch of SUVs – Brezza, Ertiga, S-Cross, XL6 – drop 34% in June 2022. But expect the carmaker, which has an order backlog of 305,000 units in the domestic market, to soon get its production act in fast-forward mode and come out firing on all cylinders.

On June 30, the carmaker launched the 2022 Brezza, the second-generation model of the game-changing compact SUV, with prices starting at Rs 799,000 for the base LXi trim and going upto Rs 13.96 lakh for the top-spec ZXI+ AT variant (ex-showroom, India). It will be retailed via Maruti Suzuki's Arena dealerships and bookings are already underway. Deliveries are expected to begin soon. There’s plenty on offer but will the new Brezza breeze past its competition, given that it is priced higher than most if its petrol-powered rivals?

The Venue, Hyundai’s first compact SUV, drove past cumulative sales of 300,000 units in May 2022, a feat achieved in 35 months since launch. The promise of the Venue was revealed in the first six months when it clocked 50,000 sales albeit demand somewhat slowed down in subsequent months – 100,000 in 15 months, 200,000 in 25 months and 250,000 in 30 months. This can also be put down to the Venue being in the most hotly contested sub-segment of the UV market: compact SUVs where it rivals the Maruti Brezza, Tata Nexon, Mahindra XUV300, Kia Sonet and more recently the Nissan Magnite, Renault Kiger and Tata Punch. Importantly, the Venue is high on fuel efficiency and its frugal sipping habits is drawing more consumers in a time of wallet-burning fuel prices.

Electric mobility is also where Tata Motors is aggressively driving gains. Spearheaded by India’s best-selling EV – the Nexon EV – the carmaker despatched 3,507 units, up 433% on the 658 units of June 2021 and 2% on the month-ago 3,454 units in May 2022. Between April and June 2022, a total of 9,283 Tata EVs have been sold, marking 441% YoY growth (Q1 FY2022: 1,715). Do the math and it works out to 102 electric cars being sold on each of the 91 days in the first three months of the ongoing fiscal. Clearly, good going for Tata Motors, whose recently launched Nexon Max EV is also witnessing strong demand in the domestic market.

Shailesh Chandra, Managing Director, Tata Motors Passenger Vehicles and Tata Passenger Electric Mobility said, “Demand for passenger vehicles continued to stay strong in Q1 FY23 even as the supply side remained moderately impacted due to the lockdown in China. Overcoming the challenges, Tata Motors posted record-breaking monthly sales (June’22) as well as quarterly sales (Q1 FY23). Going forward, we expect the supply side, including that of critical electronic components to progressively improve. We will continue to keep a close watch on the evolving demand and supply situation and take appropriate actions.”

According to Veejay Nakra, President, Automotive Division, M&M, “Q1 FY2023 is our second consecutive highest SUV sales quarter. This has been made possible due to continued robust demand for all our brands including XUV700, Thar, Bolero and XUV300.”

M&M was in the limelight in June for a couple of other reasons: its flagship XUV700 won Global NCAP’s ‘Safer Choice’ award, thereby becoming the second Mahindra model after the XUV300 to do so. And on June 27, the company launched the second-generation of one of its long-time best-sellers: the Scorpio N.

Priced at Rs 11.99 lakh for the entry-level petrol MT and going up to Rs 19.49 lakh for the top-spec diesel-MT variant, the Scorpio-N is an all-new product designed at Pininfarina, Italy and Mahindra India Design Studio (MIDS), Mumbai and engineered by the teams at Mahindra Research Valley (MRV) near Chennai and Mahindra North American Technical Center (MNATC) in USA. Born of a Rs 1,600 crore investment, the new Scorpio which rolls out of the Chakan plant has a lot riding on it.

Commenting on the June sales, Atul Sood, Associate Vice-President, Sales, and Strategic Marketing, TKM said, “The past month witnessed huge growth in terms of wholesales, thanks to the very promising booking orders that most of our models enjoy. The new Glanza has received a tremendous response from our customers and continues to clock very promising booking orders. Both our self-charging hybrid electric vehicles, the Camry Hybrid and the Vellfire, have also received tremendous appreciation and a true testimony to that are our half yearly cumulative sales that have been the best in the last four years.

Segment leaders like the Crysta and the Fortuner continue to peak demand, and customer orders are on the rise. The Legender too continues to garner robust booking orders. Toyota is known for its SUVs worldwide and we at TKM are very excited about our upcoming foray into the popular B-SUV segment in India.”

Skoda India: 6,023 units / 721%
Nothing like a new product to give a new charge in a competitive market. And Skoda Auto India has got two of them: the Kushaq SUV and the Slavia sedan. Both dynamic products have given the Czech carmaker solid traction, proof of which is the 6,203 units chalked up in June 2022, up a massive 721% on a low year-ago base of 734 units. Not surprisingly, June numbers have set a new monthly sales record for Skoda in India.

Zac Hollis, Brand Director, Skoda Auto India said, “Both our India 2.0 products have entered the market in an extremely challenging backdrop. A global pandemic, intermittent lockdowns, economic upheaval, geopolitical instability, and now a continued semiconductor shortage upsetting supply chain. So, it’s an incredible achievement for all of us at Skoda Auto India to continue breaking and setting new sales records. It’s the result of all-round work from all our teams. Not just in terms of the product, but in terms of customer satisfaction, a wider, deeper penetration of our all-new customer touchpoints and a series of consumer-centric service campaigns. Also playing a big role are our dealer partners who have done a stellar job. Together, we will ensure that 2022 will be our ‘Biggest Year’ in India.”

MG Motor India: 4,503 units / 26%
MG recorded sales of 4,503 units, up 26.56%, with the flagship Hector and ZS EV drawing monthly bookings of over 4,000 and 1,000 units respectively. According to the company, “The momentum in sales comes on the back of some ease in semiconductor availability, even though the outlook remains constrained in the wake of supply-chain roadblocks and persistent logistical headwinds.”

The company says it is taking all necessary steps to address the production and supply chain issues and expects the situation to gradually improve in the second half of 2022. 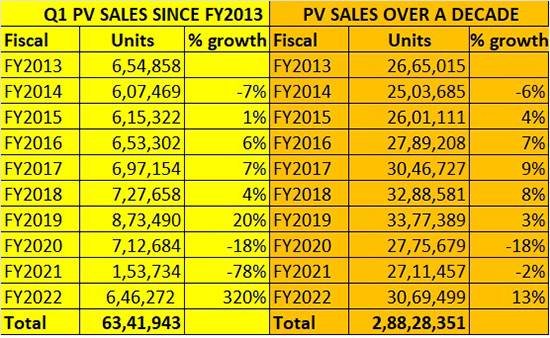 What’s driving the smart uptick in PV sales is the unabated boom in SUV demand. In FY2021, UV sales in India crossed a million units (or 10 lakh units) in a single year for the first time. In FY2022, the UV segment accounted for 48.51 percent of total PV sales, which means nearly every second car sold in India is a utility vehicle. No surprise then that every vehicle manufacturer worth its wheels aims to expand its footprint in this booming segment. At present, there are 31 OEMs with UVs in India, selling approximately 101 models which cumulatively account for a staggering 666 variants available with a consumer-friendly mix of fuels, engines and transmissions.

Given the pent-up demand in the market, the sizeable order backlog for top players like Maruti Suzuki, Hyundai, Tata Motors and Mahindra, the easing of the supply chain and chip issues and a continued surging boom for SUVs, it looks like the Indian car industry could be driving towards a record fiscal and even cross the 3.4-million-units mark. The caveat, of course, is that the industry maintains smooth production levels without supply chain hiccups, there is no fourth wave of the pandemic and that the overall economic scenario improves. Stay tuned for more updates. 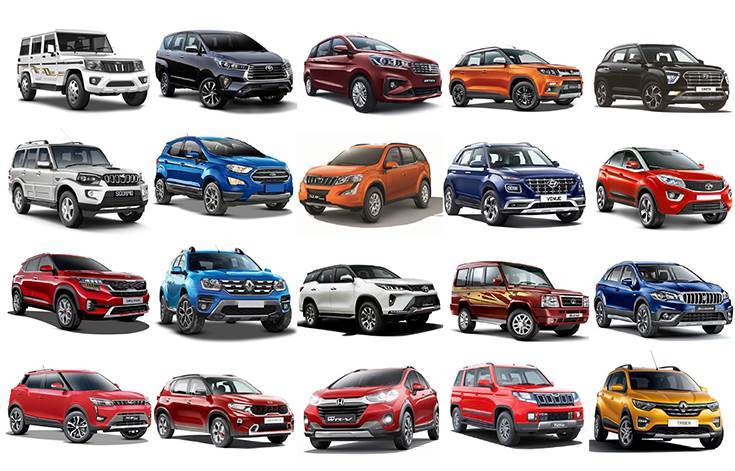