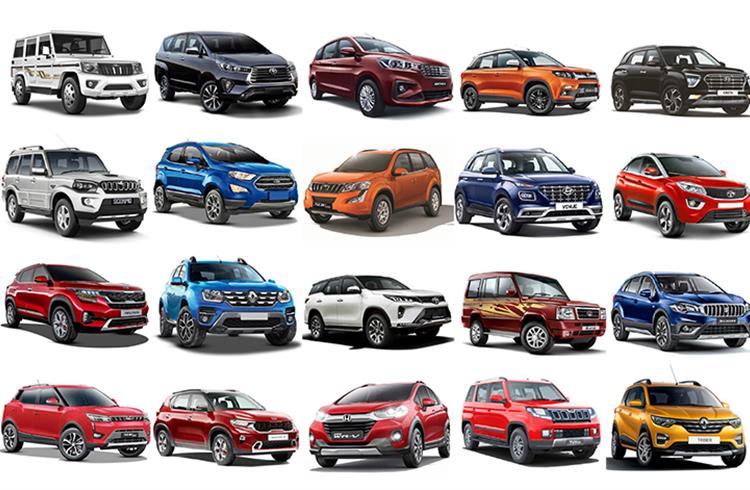 If there is one vehicle category which has made industry, in India and the world over, stand up and take notice then it is the Utility Vehicle (UV) or Sports UV (SUV) segment. Even the pandemic had far less of an impact on this segment as it did on others.

The reason is not difficult to fathom. In line with the global trend, the past few years have seen a surging wave of demand for UVS, particularly compact SUVs. Therefore, it is not surprising that most passenger vehicle (PV) OEMs, having recognised the huge potential, are rushing to introduce new products or strengthen their SUV portfolio. 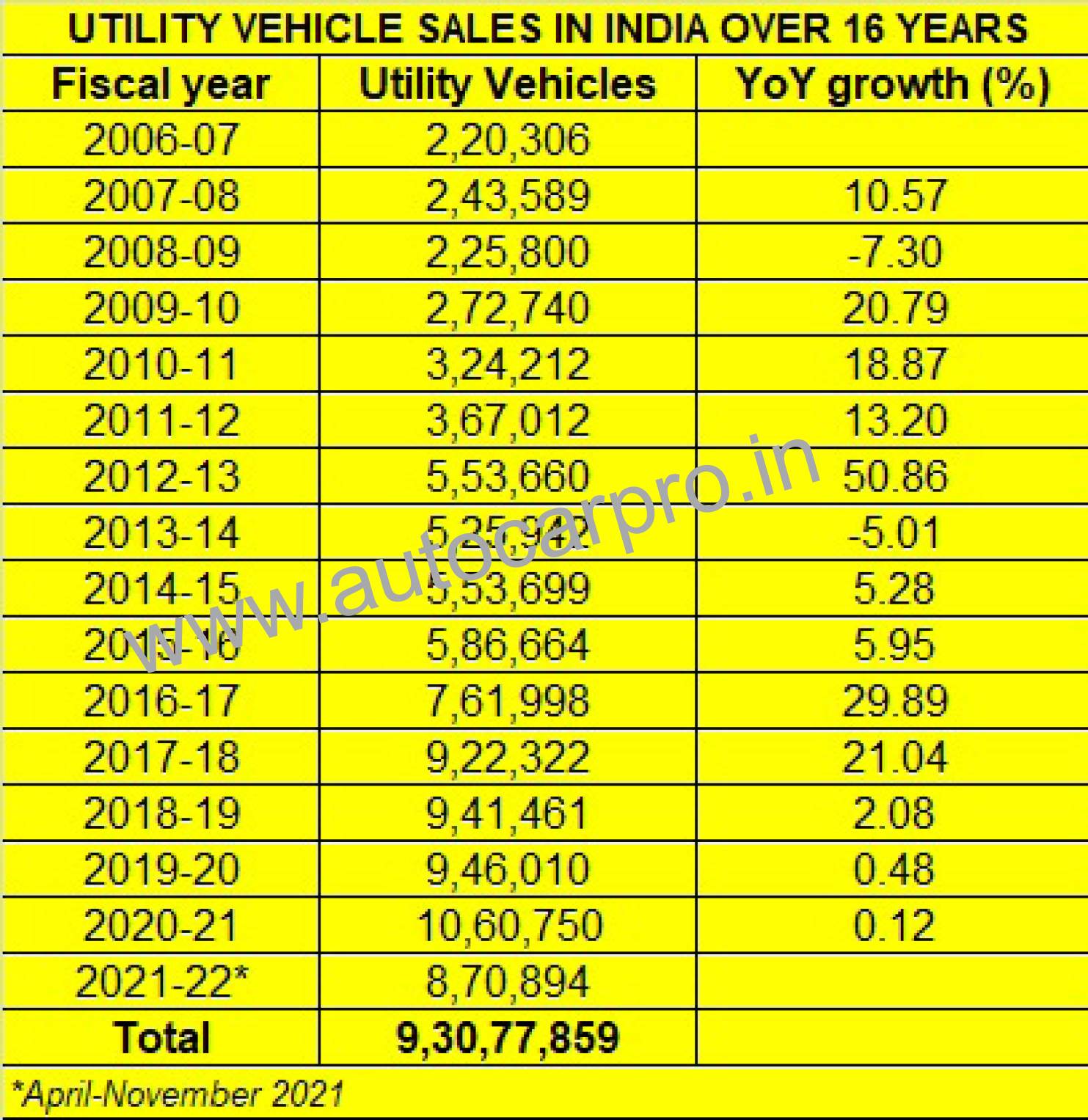 Autocar Professional’s 16-year UV sales data analysis reveals that from FY2007 to FY2022 (April-November 2021), a total of 93,077,859 units or 9.3 million UVs have been sold in India.A close loook at the statistic-laden table of the 9.3 million UVs sold since FY2007 reveals that while the first 4 million units took all of 10 years, the next 4 million units halved that to five years. What helped, of course, is the shift in consumer preferences and demand and the fact that from 25 UV models in FY2007, there are a total of over 80 UV models in FY2022 and counting.

SUVs: the cars for all reasons and all seasons
The all-encompassing appeal of the SUV is not difficult to fathom. Bigger and taller than regular cars, they give the driver a better view of the road ahead – so important in a country like India. And, the raised ground clearance is always helpful when it comes to driving over rugged terrain.

Furthermore, being larger than hatchbacks and some sedans, they also pack ample storage space, have cavernous boots and have plenty of room at the rear to stretch out. Just right to be used as a family car. But big can also be small because with the advent of the sub-4-metre compact SUV category in India, these SUVs can easily manoeuvre through dense traffic and also fit into tight spots armed as they are these days with driving aids.

Tanking up is also not a hugely expensive affair as it used to be with SUVs in the past. OEMs and engine engineering have made huge advances over the years, which is why SUVs in recent years are both fuel efficient and also more eco-friendly.

Of course, when it comes to ride and handling, SUVs are the vehicle you’d like to have when you are driving in bad weather conditions or unknown roads. Sizeable weight, bigger and wider wheels and robust nature ensure they deliver improved grip and stability. Safety is paramount and today most SUVs come with ABS, EBD, ESP and even hill-hold and hill-descent control in some cases. 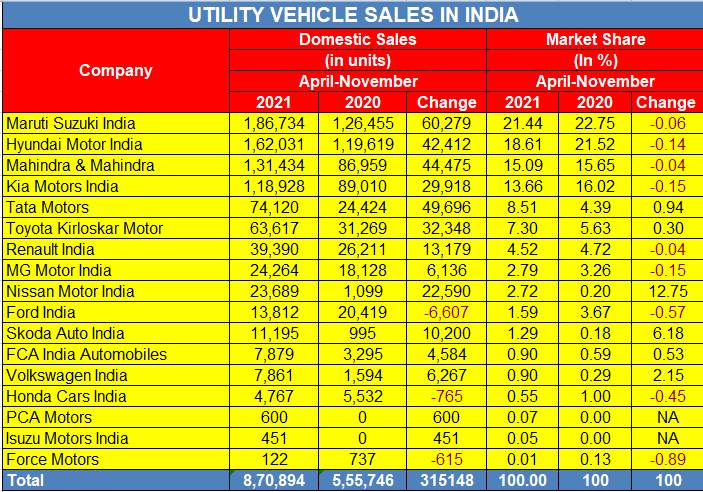 How the OEMs stack up, market share-wise
In a vehicle segment where sales are booming, rivalry can only be intense which is amply seen in the UV market share statistics for the April-November 2021 period (see detailed table above).

Kia Motors India, with 118,928 units and 13.66% market share is in fourth position – a remarkable achievement having launched its first product — the Seltos — barely 29 months ago. A resurgent Tata Motors, with 72,120 units is at No. 5 with a UV market share of 8.51%, having doubled its UV share from 4.39% a year ago. However, since Tata Motors does not send in its monthly sales numbers, this tally could be revised upwards.

Things turn interesting when Hyundai and Kia sales and market share are clubbed together. With a total of 280,959 units, the two Korean OEMs have the majority UV market share of 32.26 percent.

The big contributors
The UV growth story, which has accelerated in the past decade, has its top performers. A speedy check at some of the top contributors to the 9 million sales in the past 16 years reveals the star performers. These Top 20 (see data table below) in the period under review are led by that sturdy warhorse Mahindra Bolero , which has since January 2009 sold over a million units (1,073,598). Add FY2007 and FY2008 sales and the Bolero’s count will be a lot more. 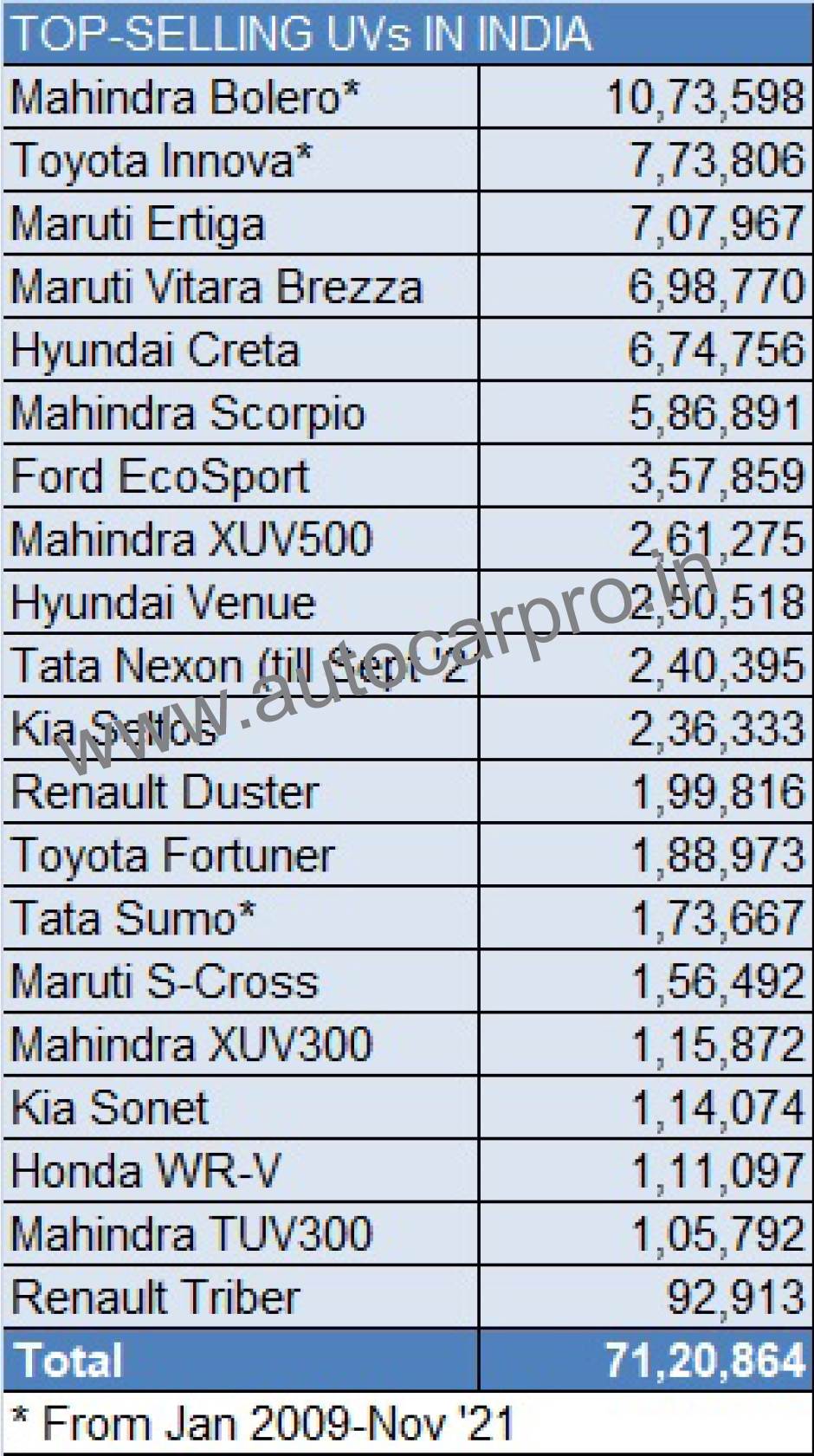 It’s a similar case with the Toyota Innova, now with the Crysta suffix, which has sold 773,806 units but what’s remarkable is that the popular Innova MPV is one of the costliest vehicles in the Indian market, whose price-tag has never dipped.

Growth outlook: Things can only get better
In line with global trends, the SUV wave will also continue in India as consumers look for a set of wheels that can prove to be do-it-all products. Being less vulnerable to traffic in the city due to their muscular build or having the inherent capability to wander anywhere over the weekends, SUVs are increasingly being preferred for their added benefits on the Indian roads compared to hatchbacks or sedans.

At present, virtually every second passenger vehicle (47%) sold in India is a UV, which is why OEMs are doing all they can to ride the continuously growing wave of demand. The overall sales numbers would have been more had it not been for the semiconductor crisis which turned into a sales speedbreaker for all vehicle manufacturers.

Now, in CY2022, which opens tomorrow, carmakers will go all out to bring in new SUVs , ranging from the Maruti Jimny and new Mahindra Scorpio and facelifted Hyundai Creta, through to the luxurious Audi Q3 and Maserati Grecale. Get set to usher in even more exciting time as this booming but ultra-competitive segment will continue to see the SUV-vival of the fittest.