While the first 50,000 unit sales came up in a scant 6 months, growing compact SUV competition has arguably slowed down demand. 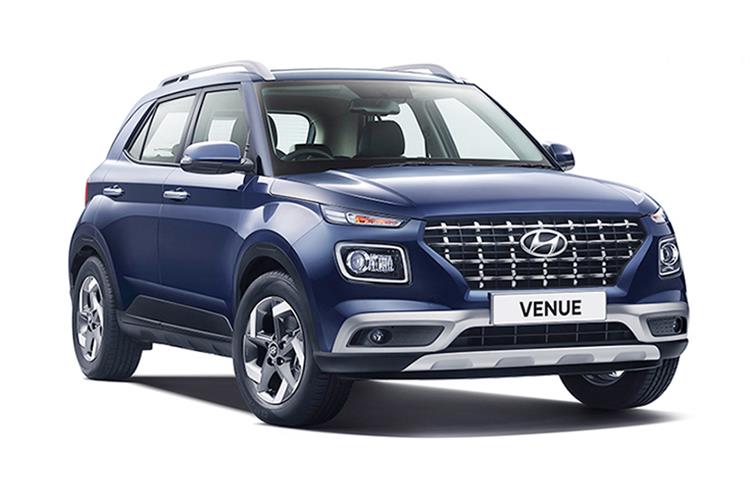 Hyundai Motor India’s first-ever compact SUV – the Venue – has driven past the 250,000-unit sales mark in the Indian market. The milestone comes 31 months after the Venue was launched on May 21, 2019 at introductory prices starting at Rs 650,000 and going up to Rs 11.10 lakh

The Venue is available with three engine options. There's a 1.2-litre petrol, a 1.5-litre diesel and a 1.0-litre turbo-petrol that can be had with a 7-speed dual-clutch transmission.

The promise of the Venue was revealed in the first six months when it clocked 50,000 sales albeit demand somewhat slowed down in subsequent months – 100,000 in 15 months, 200,000 in 25 months and 250,000 in 30 months. This can also be put down to the Venue being in the most hotly contested sub-segment of the UV market: compact SUVs where it rivals the Maruti Vitara Brezza (currently India's No. 2 best-selling UV), Tata Nexon, Mahindra XUV300, Kia Sonet and more recent entrants like the Nissan Magnite, Renault Kiger and Tata Punch.

As per Autocar Professional’s data analytics, from launch till end-November 2021, the Venue has clocked total sales of 250,518 units, comprising 181,829 petrol and 68,689 diesel variants which makes a ratio of 73:27 overwhelmingly in favour of petrol.

The Venue’s basic shape makes it look like a scaled-down Creta but styling is far more flamboyant particularly the split headlamp arrangement. The Hyundai Venue interior is neatly styled and the dashboard that places the 8-inch touchscreen high up is particularly user-friendly. Hyundai has also incorporated plenty of storage for small items in the Venue cabin and even the boot is large enough to hold two suitcases. Where the Venue loses out is in rear seat space, says Autocar India. Legroom is far from class-leading and the relatively small rear windows make the cabin feel smaller than it is. All Hyundai Venues get safety essentials such as dual airbags, ABS, seatbelt reminders, speed warning system and rear parking sensors. However, the lower-spec E and S trims don’t get all that much by way of comfort and convenience features.

High on fuel economy
A fair portion of the Venue’s appeal goes to its fuel efficiency. Topping the list is the Venue 1.0 GDI with the 6-speed manual transmission that delivers 18.27 kilometres per litre. A close second is the 1.0 GDI with the 7-speed dual-clutch auto that has an ARAI-tested fuel economy figure of 18.15kpl. The Venue 1.2 petrol, available solely with a 5-speed manual gearbox, delivers a lower 17.52kpl. The Venue 1.4 diesel is rated for 23.7kpl.