Suzuki India is not only the sole OEM to see growth in sales in a difficult first nine months of FY2020 but has also gone ahead of Hero in terms of scooter market share. 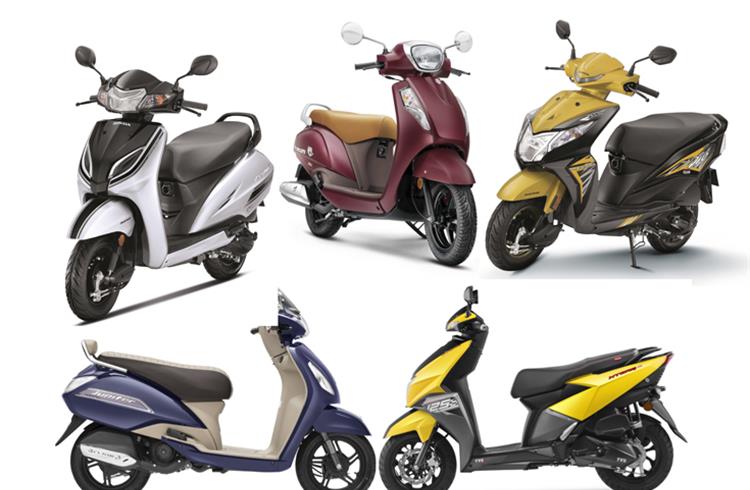 The scooter market, like motorcycles, continues to feel the heat of the slowdown and SIAM’s recently announced April-December 2019 sales numbers reveals that the scooter segment is down 16.16% (4,463,954 units). Dampened economic and consumer sentiment has hit all scooter makers but one – Suzuki – which has bucked the trend with a smart performance in the first nine months of the year.

At 502,971 units sold, Suzuki has recorded 14.44 year-on-year growth (April-December 2019: 439,500) and is the sole company among 7 scooters makers to show growth. All other six players have shown sales declines in April-December 2019 (see sales statistics and market share table below). Not surprisingly, Suzuki has also made the highest gains in market share – 3 percentage points – increasing its scooter market share to 11.17% from 8.25% a year ago. It has gone ahead of Hero MotoCorp (7.88%) and is now third in the pecking order, after leader Honda Motorcycle & Scooter India (55.66%) and TVS Motor Co (19.35%)

Suzuki’s scooter sales have contributed 11.2% to overall sales in April-December 2019, up from 8.25% a year ago, indicating the growth of the company in this sector.

Access 125 powers Suzuki’s growth
The Access 125 has turned out to be a game-changer for the company. This popular buy and Suzuki's best-selling scooter seems to be closing the gap with the Jupiter and is a consistent No. 3, after the Activa and Jupiter. On January 6, the company launched the BS VI-compliant version, with prices starting from Rs 64,800 for the drum CBS and going up to Rs 69,500 for the disc CBS Special Edition. In the transition to stricter BS VI emission norms, the scooter has switched its fuelling system from a carburettor to fuel injection. In terms of output, the upgraded Access 125 will produce 8.7hp at 6,750rpm and 10Nm of torque at 5,500rpm. The power output remains unchanged as compared to the BS IV engines. However, torque figures have dropped (albeit marginally) by 0.2Nm.

Honda still boss but seeing slowing growth
Longstanding market leader Honda Motorcycle & Scooter India (HMSI) remains in an unassailable position at 55.66% market share. HMSI sold a total of 2,484,852 scooters in the first nine months of this fiscal, down a substantial 16.79% albeit the rate of decline is slowing. This performance is reflected in its reduced market share: 55.66% as against 56.09% a year ago.

The company is aggressively working to make the transition to BS VI and on September 11, launched the BS VI Activa 125 in three variants - Standard, Alloy and Deluxe. The Standard is priced at Rs 67,490, while Alloy and Deluxe cost Rs 70,990 and Rs 74,490, respectively. This means the base variant of the BS VI Activa 125 is an additional Rs 2,478 over the top-spec disc variant of the current model that currently retails at Rs 65,012 (all prices, ex-showroom Delhi).

On November 27, a day after it rolled out its first BS VI-compliant two-wheeler, the Apache RTR, TVS expanded its BS VI product range to its popular Jupiter scooter, which is equipped with ET-Fi (Ecothrust Fuel injection) technology. The BS-VI TVS Jupiter Classic ET-Fi is priced at Rs 67,911 (ex-showroom Delhi).

Launched in 2013, the Jupiter remains the best-selling TVS scooter and is the No. 2 best-selling scooter in India. It crossed the million unit sales mark 30 months after launch and at present has customer base of over 3 million customers.  The TVS Jupiter is available in four variants – Base,   ZX (Disc and Drum), Classic and Grande.

Nonetheless, Hero MotoCorp is looking to cash in on the growing demand for 125cc scooters. In May this year, it launched the Maestro Edge 125 in three variants – a carburettor drum brake variant priced at Rs 58,500, a carburettor disc brake variant at Rs 60,000 and a fuel-injected variant at Rs 62,700 (prices ex-showroom, Delhi). Hero’s second offering in the 125cc segment, after the Destini 125, faces competition from other similarly conceptualised scooters like the TVS NTorq (Rs 59,900) and the Honda Grazia, for which prices start from Rs 60,723.

Piaggio does marginally better
Piaggio with its Vespa and Aprilia brand of scooter has seen its market share grow marginally to 1.17% from 1.16% a year ago. The company sold a total of 52,143 units compared to 61,953 units in April-December 2018.

The scooter market, like the motorcycle market, is feeling the heat of the slowdown. All OEMs are currently busy implementing the emission technology upgrade to BS VI, which has seen a 7-10% increase in costs. Will consumers take the price increase in their stride and will the tide turn in the new year? Watch this space.