Surging demand for SUVs powers PV sales in September, up 35%

Growing demand for UVs, particularly compact SUVs, give a fillip to PV sales even as OEMs despatch increased numbers to dealers across India, anticipating strong numbers in the festive season 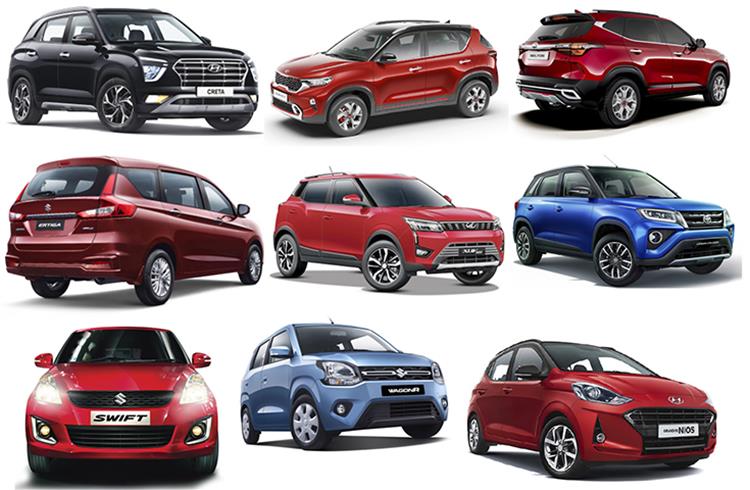 After reeling under a stressful first five months of FY2021, the buzz finally seems to be back in the passenger vehicle (PV) segment and, fingers firmly crossed, for the rest of the fiscal. Most of the PV  OEMs which announced their September 2020 sales / despatch numbers, have recorded robust to strong year-on-year growth. It also helps that most are stocking up on the dealer inventory across the country to speedy deliveries in the upcoming festive season.

The growth trajectory can easily be gauged from the performance of industry bellwether Maruti Suzuki which reported a 34% uptick on a YoY basis in its September 2020 sales numbers. It was followed by country’s second-largest carmaker Hyundai Motor India as well, which saw sales jumping 24 percent. The numbers might have been better but most OEMs are going cautiously into the festive season and rationalising the inventory build-up at their dealer partners after experiencing a bout of overstocking during September 2019.

What’s providing momentum to sales is the surging demand for SUVs particularly compact SUVs. In August 2020, the UV segment was the best-performing of all – at 15.54% (81,842 units). September UV sales will better this easily – club the UV sales of Maruti Suzuki, Hyundai, Kia, Mahindra & Mahindra and Tata Motors, and you can expect the 90,000-unit mark to be easily breached in September 2020.

Here’s looking at some of the individual OEM performances last month.

Maruti’s UVs, however, witnessed a relatively low growth rate at 10 percent with sales of the petrol-only arsenal of Ertiga, XL6, Brezza and S-Cross culminating at 23,699 units (21,526).

Hyundai Motor India: 50,313 units / 24%
The No. 2 PV player by sales volumes, Hyundai Motor India recorded a 24% increase in sales numbers at 50,313 units (September 2019: 40,705). The company is riding high on the demand for the all-new second-generation Creta SUV, which is going against the market trend and buyer cautiousness and maintained its top-selling UV status in August at 11,758 units.

According to Tarun Garg, director, Sales, Marketing and Service, HMI, “In the changing business environment, the green shoots are clearly visible with sales improving on a month-on-month as well as year-on-year basis. HMI continued its sales momentum driven by high customer acceptance for the all-new Creta, Venue, Grand i10 Nios and Aura, as well Kona EV.”

“We are confident that the coming festive season will drive the market on a steady recovery path with positive customer sentiments,” Garg remarked.

Tata Motors: 21,199 units / 162%
Tata Motors’ domestic PV sales raked in at 21,199 units last month, recording substantial 162% growth (September 2019: 8,097). The growth for Tata Motors comes riding on the wave of demand for the Nexon compact crossover, flagship Harrier SUV, as well as hatchbacks – Tiago and the latest Altroz premium hatchback. From a quarter-to-quarter perspective too, Tata Motors recorded a strong 112% growth wherein it sold 54,794 units in Q2 FY2021, compared to 35,898 units in Q2 of last fiscal. The company also sold 924 Nexon EVs in Q2FY2021, with an encouraging response received for its first all-electric SUV.

According to Shailesh Chandra, president, PVBU, Tata Motors, “The PV industry witnessed recovery in Q2 FY2021, supported by festive sales in some regions and continued benefit from pent-up demand across the country. In September 2020, wholesales were higher than retail ahead of the festive season. Despite challenges owing to rising Covid-19 cases across the country, the supply side has been progressively improving.”

Kia Motors India: 18,676 units / 147%
Like Hyundai, UVs are driving growth for Korean sibling Kia Motors India. Both the Seltos midsized SUV and the newly-introduced Sonet compact crossover are firing on all cylinders and making a splash in the passenger vehicle pool. The company registered its highest-ever domestic sales in the month at 18,676 units, posting a 147% year-on-year growth rate – splendid going for the brand which is just 14 months old since India market entryt.

The big news for Kia is that Sonet, launched on September 18 at prices starting at Rs 671,000, sold all of 9,266 units, beating its popular sibling Seltos by 187 units. The Seltos sold a total of 9,079 units. This would make the Sonet the No. 2 UV of the month, with the Hyundai Creta leading the charts. The Carnival MPV sold 331 units.

The strong market acceptance of the Sonet as well as the robust sales of the Seltos and Carnival indicates recovery of demand in the domestic market, ahead of the onset of the festive season. With two dynamic products like Seltos and Sonet, Kia’s dominance in the UV category continues to grow. Till end-August 2020, Kia had a 12.79% UV market share and fourth spot in the 16-OEM pecking order; with September’s performance, this can only grow bigger.

Commenting on the surging demand for its products, Kookhyun Shim, MD and CEO, Kia Motors India said, “The Indian auto market is recovering at a better-than-expected pace and we are progressing as per our defined plan. Our third product and the first compact SUV in India, the Kia Sonet, has completely transformed its segment. The sales of our other industry-leading products like Kia Seltos and Carnival are also encouraging. With this strong product portfolio, we are confident of continuing the positive forward momentum.”

From receiving 6,523 bookings on the first day the bookings were thrown open, the Sonet has already surpassed the 35,000-mark and looks set to disrupt the compact SUV market.

The company is now gearing up to lure even more buyers to its showrooms with the second-generation version of its iconic Thar, all set to be launched in the country today, October 2.

According to Veejay Nakra, chief executive officer, Automotive Division, M&M, “At Mahindra, we are happy to witness a growth of 6 percent in utility vehicles. It is also encouraging to see that the enquiry and booking levels in September were significantly higher compared to the previous months. With market sentiments indicating a robust festive demand across segments, both in rural and urban markets, we are positive that this festive season will augur well for us as well as the automotive industry.”

According to Rajesh Goel, senior vice-president and director, Marketing and Sales, Honda Cars India, “The September results saw an uptick in our despatches in line with our plan and reaffirms slow but steady path to recovery, both for demand and supply. This was also our preparation for the festive season where we expect the market to gain further momentum from mid-October with the start of Navratras.”

“We also expect the need for personal mobility to surge due to customers’ necessity to guarantee personal safety during the Covid times, which, eventually, will get reflected in industry volumes in the coming months. For the upcoming festive period, we have planned exciting offers on our cars including easy financing options to help augment sales,” he added.

Toyota Kirloskar Motor: 8,116 units / -20%
Contrary to the general industry trend, Toyota Kirloskar Motor (TKM) reported a 20% decline in September 2020 with sales totalling 8,116 units (September 2019: 10,203). However, while the decreased numbers are also on the account of discontinued mass-market models including the Etios and Liva twins, the carmaker has been inching towards recovery, which is visible from its month-on-month performance improvement that shows a 46% growth over 5,555 units sold in August 2020.

According to Naveen Soni, senior vice president, Sales and Service, TKM, “We are seeing demand pick up and a lot more confidence in our dealers, thereby witnessing a 14 to 18% growth in orders when compared to last few months. September has been our best month so far, ever since the pandemic hit us in March 2020. Factors leading to this can be attributed to the pent-up demand amongst customers as well as the onset of the festive season.”

“In terms of production, our manufacturing side has gone back to two shift production a day, thereby supporting us to keep up with the demand. Another factor leading to such demand could be attributed to the new launches in the market. TKM also announced the launch of Urban Cruiser in September and we have got a very good response from our customers and the market, ever since we opened the bookings for Urban Cruiser.”

With new introductions in the form of the six-seat Hector Plus as well as the upcoming MG Gloster flagship SUV, the company is bullish on leveraging demand in the UV segment.

According to Rakesh Sidana, director, Sales, MG Motor India, “While the fresh booking trend continues to grow steadily for MG Hector and ZS EV, the retail sales were severely impacted in September due to the inauspicious period. The wholesale were much more than retails in anticipation of the upcoming festive season. Although the challenges continue in the overall economy and supply chain, and our teams are doing their best to overcome these and we are looking forward to festive season and the launch of Gloster in October 2020.”

According to Zac Hollis, brand director, Skoda Auto India, “The Rapid managed to grab 11 percent share in the midsized sedan segment. We hope that the festive cheer will help in carrying forward the momentum in sales and expects even better growth in the month of October.”

Growth outlook for FY2021
Look at the sales numbers for September 2020 and they paint a good picture. Another six OEMs are yet to reveal their sales figures. So, expect the 300,000-units mark to be breached.

At 275,137 units from 9 PV manufacturers and a strong 35% YoY growth, the momentum has been set for the coming months. While the initial market trends do suggest a bigger uptick during the festive season with people’s sentiment improving and the need for personal mobility becoming even more evident in Covid times, it would be interesting to see how the anticipation of the industry matures in the realistic world. From the looks of it, the sure-shot answer to get people flocking showrooms even in difficult times seems to be an exhilarating product at an unmatched value, just like what is happening in the case of Hyundai and Kia. Will the industry be able to keep up the momentum in the coming months? We will keep a close tab.