Few stars in a time of slowdown

The sales slowdown in the passenger car industry continued for the first six months of 2012-13. Will there be a revival in the festive season? 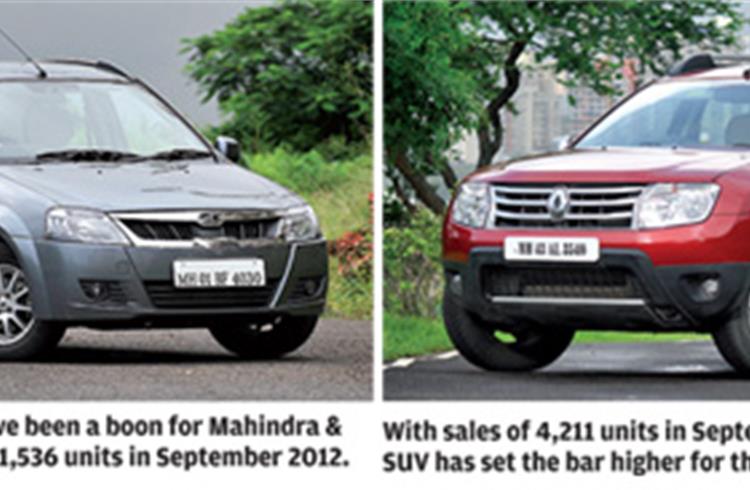 Six months into the current fiscal year and the impact of the slowdown is more than evident in the passenger vehicles sector. In August, when sales fell by 18 percent, the impact was most severe even factoring the impact on sales of the lockout at Maruti Suzuki. This even got the industry body, the Society of Indian Automobile Manufacturers to actually suggest, reportedly, that a sop in terms of an excise duty was perhaps needed.

The slowdown in passenger car sales can be attributed to the cumulative impact of the higher petrol prices – almost 10 hikes – over the last 18-20 months, high interest rates and economic weakness. The economy grew 5.1 percent in manufacturing and unless some key reform decisions are taken, the slowdown may worsen.

The Centre’s ‘significant’ reforms, first announced in September, may just push up the growth rates if it leads to an easing on interest rates but this will take place over a few months. All eyes are on the RBI’s credit policy to be announced later this month. In the interim, the discounts being offered provide a kind of balm to the automotive sector.

In September, diesel prices were hiked by Rs 5 per litre. Apart from that fact that the government had bitten the ‘diesel’ bullet, it also gave automakers some relief. Before the 2012 Union Budget, the fears were rampant that the government would impose a tax on diesel-powered cars. That now seems unlikely. However, the increase in diesel at the bunk will not make buyers opt for petrol as a significant price gap still exists between the two fuels. If higher prices lead to more rational use, wastages may fall.

Top of the charts

Model-wise, the Alto continues to be India’s top-selling car racking up close to 17,000 units on average a month. Sales in August plunged to just over 10,000 units, largely due to the lockout at Manesar, but the car appears on track for September with sales topping the 20,000-mark. However, cumulatively, Alto sales dropped 23 percent from 143,437 units to 109,330 units in the first half of 2012. The Wagon R has sold about 10,000 units on average in the first half, lower than its year-earlier period performance with sales in the region of 12,500 and above. Its key disadvantage is that being petrol-powered, rivals that have a diesel variant have thrived. The Chevrolet Beat is one model that has benefitted with sales of at least 4,000 units every month. The car has sold 26,864 units in the April-September 2012 period.

Staying with the B-segment, another petrol-only car, the Hyundai i10 sold 43,421 units in the first half as against 62,719 units in the year-earlier period, down 30 percent. Among compacts, one car that comes with a strong branding and with petrol and diesel offerings but didn’t do quite as well is the Toyota Liva which has not been able to set the market afire. The car has sold just 13,000 units in the first half with August sales falling below the 2,000 mark. The Figo is one car that has ridden the shift to diesel but going by sales in the first half of the current fiscal, its performance has been flat. Ford sold 32,635 units in the period, down one percent from 33,016 units sold in 2011. Even Tata Motors, a powerhouse in diesel, has been impacted. The Vista, launched a year ago, has sold 42,114 units, just two percent over the 41,283 units in the first half of 2011-12. In the current fiscal, just over 250 cars have been petrol. Close to a year after the floods affected Honda’s Thailand operations, Honda Cars India has not quite been able to make up. The Jazz sold 1,300 units in April 2012 but sales have halved thereafter but the company sold 5,516 units in the April-September 2012 period as against 2,114 units in the corresponding period of 2011. Honda cut prices of the Jazz a year ago and also launched a cheaper version, a move that has paid dividends.

Mahindra & Mahindra launched a refreshed Verito in the first half and sales in August crossed the 2,000-mark for the first time, indicating that the refresh has much promise. Powered by a powerful diesel engine, the car has been a huge hit. Not surprisingly, the petrol has sold in single numbers. And staying with Mahindra, its refreshed Bolero has been an out-and-out success selling 8,000 units on average in a month. Exactly a year ago, the vehicle touched 9,764 units and crossed the 10,000 mark in March 2012. And the Bolero’s successful run continues with sales of 54,399 units in April-September 2012. In the compact segment, sales of the VW Polo, which has been in the market for two-and-a-half years, have been rather flat. The company sold 14,000 units in the first half and to boost sales has dropped prices of its top-end models to woo more buyers. Compared to 2011’s first half sales of 19,000 units, it’s a sharp fall of 25 percent.

In the SUV segment, the Renault Duster has appeared on the scene with a bang, selling 4,211 units in Septmber 2012 and over 8,000 units so far. However, in this space, the real winner so far has been the Ertiga which sold about 37,000 units and has given Maruti some cause for cheer.

The first half of the year has seen SUVs and MUVs do well and that is in keeping with an emerging trend in the market. At the moment, the Ertiga has a head-start but the field will get more competitive going forward. Waiting in the wings is the EcoSport from Ford India which will roll out from its Chennai factory in early 2013.

And finally, the top two players in the D segment – the Toyota Corolla Altis and Chevrolet Cruze – have seen declines in sales. While the leader, the Altis sold 3,365 units, the Cruze which was refreshed in end-June has sold 2,358 units. The D segment has seen the entry of the Hyundai Elantra once again (the earlier model was withdrawn in 2007) and sales have been about 600 or so. It’s still early days for the model which has a chance to take some of the space vacated by the Honda Civic which will sell only till kits last.

With the festival season approaching, carmakers are going all out to woo buyers into showrooms. While they are offering discounts, they are also launching special editions to make existing products more attractive. While Toyota has launched an Innova Aero edition, Nissan is offering the Micra's Primo Edition. Prices of cars ranging from Marutis to the Audi Q3 have gone up, with most OEMs citing input cost increases – they will be banking on the festive season for buyers to open their wallets.