Both SUVs hit the headlines at launch time and drove up the sales charts in the first two years of their lifecycle in India. 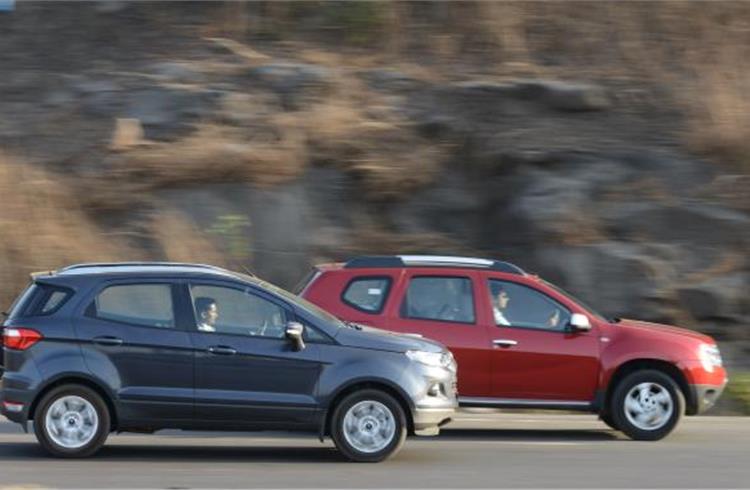 The Renault Duster, which went on sale in July 2012, and the Ford EcoSport compact SUV, which was introduced in India a year later in June 2013, have both driven past the 150,000 unit sales landmark in the domestic market.

Autocar Professional’s calculations show that while the Duster has sold a total of 149,136 units from launch till June 2016, the EcoSport has sold 148,643 units. Given that the Duster is currently averaging monthly sales of 1,945 units a month and the EcoSport  3,808 units, it can be surmised that both SUVs will have already crossed the 150,000 unit sales landmark earlier this month.

Both SUVs hit the headlines at launch time and drove up the sales charts in the first two years of their lifecycle in India. Renault India opened up the SUV segment in India like never before, dusting off the existing competition. A year later in June 2013, the EcoSport entered the market with a bang, thanks to an aggressive price tag which could be achieved because of its length of less than 4 metres, which attracts a lesser excise duty than vehicles like the Duster.

In 2012-13, the Duster, which was Renault India’s best-selling car before the introduction of the Kwid hatchback, managed to sell close to 40,000 units. Despite the introduction of the EcoSport in 2013-14, the Duster continued to do well with sales increasing to 46,786 units. The same fiscal saw Ford India sell 45,008 EcoSports, highlighting the Indian consumer’s growing preference for compact SUVs.

2014-15 saw Ford India take the lead over its rival with 52,508 EcoSports sold as compared to 39,280 units of the Duster. The popularity of these models was not to be missed by other OEMs. With every automaker worth its salt preparing to launch a compact SUV, it was only a matter of time before these two SUVs faced headwinds.

Hyundai and Maruti show their mettle

July 2015 saw Hyundai Motor India launch its much-awaited compact SUV, the Creta. The model has been a runaway success, highlighted by its 100,000 bookings within eight months of launch. Of Hyundai's total of 64,796 UVs sold in 2015-16, the Creta accounted for 63,836 units, helping the Korean carmaker overtake Ford India, Renault India and Tata Motors.

Renault India and the Duster took the biggest hit, with Duster sales dwindled by 54% to 18,045 units. Ford India, on the other hand, managed to hold its ground despite EcoSport sales slowing down to 40,000 units. 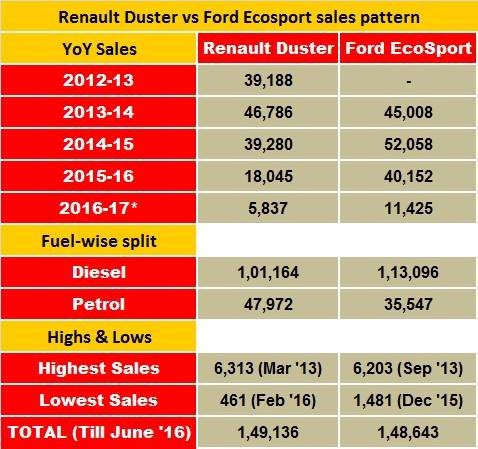 If the Creta grabbing new sales wasn’t enough, Maruti Suzuki India came up with the aggressively priced Vitara Brezza in March this year. Both Renault India and Ford India responded with knee-jerk reactions to the mounting struggle in the compact SUV space. After reporting its lowest Duster sales in February 2016 (461 units), in a bid to drive sales, Renault introduced an AMT-equipped facelifted version of the same. In Q1, 2016-17 (April-June 2016), the French carmaker has sold a total of 5,837 units, a lot less than the 6,313 units the Duster had sold in March 2013, its best monthly sales ever.

Meanwhile, in the midst of intense competition, Ford India decided to slash the EcoSport’s prices by up to Rs 1.12 lakh. Between April-June 2016 (Q1, 2016-17) the EcoSport has gone home to 11,425 buyers, averaging only 3,808 units but much better than the 1,481 units sold in December 2015, the lowest for the EcoSport in a month. Clearly, both the Duster and the EcoSport have come under considerable pressure from hard-selling rivals and it will take a lot for them to reach previous sales highs.

The clear takeaway from the sales pattern of both the Duster and Ecosport is the consumer’s preference for diesel-engined SUVs. Despite diesel being badmouthed by various governments and the courts, it still manages to find a way to Indian buyers, especially in the sub-1.5-litre category.

What’s more, the Maruti Vitara Brezza which has been introduced in diesel only and Toyota’s recent investment in its diesel engine plant in Bangalore point out that diesel bans are unlikely to have much of an impact on the compact SUV space. 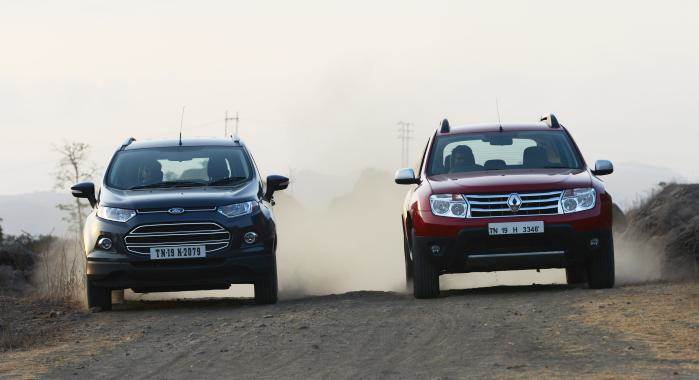 Mahindra & Mahindra, the country’s largest SUV maker, wasn’t going to be left behind in the fanfare of the compact SUV segment. It introduced the TUV300 in December 2015, followed it up with the KUV100 and more recently the Nuvosport. All in all, M&M now has two sub-four metre seven-seater SUVs and a five-/six-seater compact SUV.

The SUV segment is set to get even hotter as Tata Motors' Nexon and Hyundai's compact SUV hit the market in the next two years.

- Selling MPVs in India is no child's play