The utility vehicle segment was the sole one to be firing on all cylinders in July and it has these five models to thank. 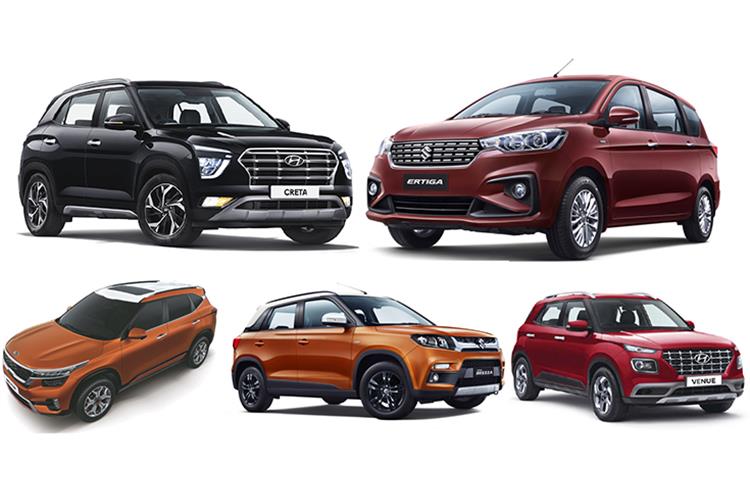 If there is some hope that the passenger vehicle segment in India, currently down 3.6% in the April-July 2020 period, will be out of the woods in the near future, then a lot will depend on the utility vehicle (UV) sub-segment.

There’s ample reason to be optimistic because not only is the UV segment firing on all cylinders – it is the only one to be in the black in July (71,384 units / 14% up YoY) –  but with a gaggle of new models to be launched in September and later in the year, there should be more smiles per mile for SUV makers. Let’s take a closer look at the best-selling UVs in July 2020 which, at 42,864 units accounted for 60% of total UV sales in the month.

Since the second-gen SUV’s launch in March this year, Hyundai, which received over 55,000 bookings, has delivered over 20,000 units till end-July. With an introductory price tag of Rs 999,000 (ex-showroom, all-India) and available in five engine-gearbox configurations and five trim levels, the new Creta seems to have ticked all the boxes with buyers.

The new Creta shares its engine and gearbox options with the Kia Seltos. The three BS VI-compliant engines on offer include a 115hp, 1.5-litre, naturally-aspirated petrol engine; a 115hp, 1.5-litre turbocharged diesel unit; and a 1.4-litre turbo-petrol. Despite the shared powertrains, the new Creta delivers slightly higher ARAI-certified mileage than its counterpart from Kia.

The new Creta, which competes with the Kia Seltos, MG Hector, Renault Duster and Nissan Kicks, clearly has the wind in its sails.

The Ertiga, which was voted the 2019 Autocar Car of the Year, is an extremely, comfortable, versatile and user-friendly family car. With the company having driven out of diesel this April, the company will be keen to see the petrol-powered Ertiga make gains in the marketplace. It looks to be doing just that and more.

On June 1, Kia Motors India rolled out a 10-feature re-jig to the crossover’s variant line-up. Pricing of the refreshed Seltos starts at Rs 989,000 (ex-showroom, India). While it is premature in the auto industry for a carmaker to be bringing any updates to a model as fresh as nine months old, Kia’s step could be assumed to have come in response to the launch of the Creta from Hyundai – its sister company giving it the home-grown competition, which  starts at Rs 999,000 ex-showroom, India.

No. 4 Maruti Vitara Brezza: 7,807 units
The Maruti Vitara Brezza, which was the harbinger of SUV change in the country which it was launched in March 2016, is now revving up in petrol format only, the company having driven out of diesel. Last month, a total of 7,807 Brezzas were bought in India, taking the company’s April-July 2020 Brezza total to 12,921 units.

No. 5 Hyundai Venue: 6,734 units
The Venue, Hyundai’s first compact SUV, is slowing down and has likely been impacted by the surging demand for its sibling, the new Creta. The Venue sold a total of 6,734 units in July, taking its April-July 2020 total to 12,105 units. It may be recollected that the Venue raced past the 100,000 sales milestone in a scant 12 months.

On July 22, the carmaker launched the Venue with an intelligent manual transmission. Will the new tech give a fillip to sales? Hyundai Motor India will most certainly be hoping so.

Given the rapid pace at which sales are picking up for UVs, this is one segment which is billed to be firing on all cylinders in the rest of the year and beyond. From the looks of it,, August should prove to be an august month for UV sales but a booster dose should come in September and October. That’s when the Kia Sonet compact SUV, Toyota Urban Cruiser and the new Mahindra Thar are to be launched. Clearly, exciting times are in store for the UV market. Stay tuned.

With total sales of 42,864 units in July, these five best-selling UVs accounted for  60% of total UV sales in India.