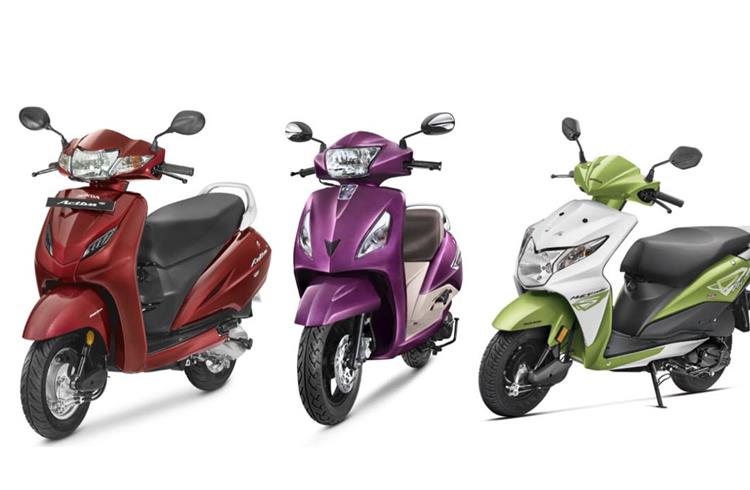 As automatic scooters increasingly gain foothold in urban, semi-urban and even rural India, the Top 10 bestselling scooters list for May 2017 conveys a number of clues about the fast-changing preferences of city commuters.

Though much smaller in volumes when compared to the motorcycle segment, the growing scooter class has been driving the growth of the country’s domestic two-wheeler market for the past few years.

Honda Motorcycle & Scooter India (HMSI) has been singlehandedly driving the scooter market, which has now gained commendable momentum. Besides Honda, TVS Motor has emerged as the second largest player in this segment beating Hero MotoCorp in FY2016-17.

While Hero MotoCorp is understood to be working on a strategy of recovering second spot in the scooter market in FY2018, Yamaha and Suzuki have found their own respective positions, which are fetching good growth to the two Japanese companies.

In the April-May 2017 period, four out of the seven scooter players in the domestic market have expanded their market share. Honda has increased its stranglehold from 57.64 percent in April-May 2016 to 61.09 percent, while TVS Motor has seen its share grow from 12.94 percent to 14.15 percent. Suzuki Motorcycles, thanks to demand for the Access, now has a share of 5.42 percent in scooters, up from 4.29 percent a year ago. Piaggio Vehicles too is up from 0.52 percent to 0.79 percent.

The Top 10 models
The Top 10 scooters for May 2017 reveals that all bestselling scooter models have grown year on year barring Yamaha’s Fascino and Hero’s Duet. Although Yamaha’s Fascino has found consistency in monthly volumes of about 17,000-19,000 units, the Hero Duet, positioned as a unisex scooter model for all members in the family, failed to perform as per its manufacturer’s expectations. Hero is understood to be working on more variants to give the Duet model more push in the market.

Honda’s Activa brand undoubtedly remains the top-selling scooter in India with sales of 282,478 units in May 2017. Notably, the market leader has grown by a respectable 19.03 percent YoY.

The Honda Dio has emerged as the new number three model in the list with sales of 41,303 units in May 2017. The Dio, extremely popular among young urban commuters, has grown by a handsome 141.55 percent YoY. A representative from a Honda dealership in Pune told Autocar Professional, “The 110cc Dio is not only the second bestselling scooter from Honda but it is also the top choice for all those scooter buyers who are looking for an option other than the sober-looking Activa. The stylish design along with bright colour options works in the favour of the Dio, and young collegians simply adore it.”

The growing impact of scooterisation in the country can be seen in the fact that the Top 10 two-wheelers for May 2017 contains the top three best-selling scooters for the first time.

The Hero Maestro, at number four, has sold 35,795 units in May 2017, up by 39.88 percent YoY. The Maestro continues to fetch volumes to Hero MotoCorp after it had launched the all-new model Maestro Edge along with the Duet in 2015. However, it has not been able to deliver the performance similar to the TVS Jupiter in the 110cc scooter segment.

The Suzuki Access 125 is at No 5 with sales of 31,895 units in May 2017. The 125cc scooter model has grown by 64.49 percent YoY. The 125cc Access is one strong scooter model that picked up demand in the market after an all-new model was launched in the early months of CY2016. The Access 125 is also the largest selling two-wheeler model for Suzuki Motorcycle India in the domestic market.

Yamaha’s 113cc stylish Fascino model now stands at the number seven slot with sales of 17,243 units in May 2017. It had sold 18,500 units in May 2016. Besides the fierce competition in the domestic market, the hit scooter model from Yamaha also faces the company’s limited retail reach across different territories in India.

At number eight, Hero’s Pleasure is back in the list with sales of 15,573 units in May 2017. The proven scooter model, which is positioned for female riders, remains one of the top choices for buyers in the marketplace.

Yamaha’s Ray, also powered by the 113cc engine that powers the Fascino, is the ninth bestselling scooter family with sales of 15,032 units in May 2017. The Yamaha Ray has grown by 29.69 percent YoY.

May 2017 also became one of the rare months when Honda’s third scooter model, the 110cc Aviator, which is positioned at the urban commuters, did not make it to the Top 10 scooters list.