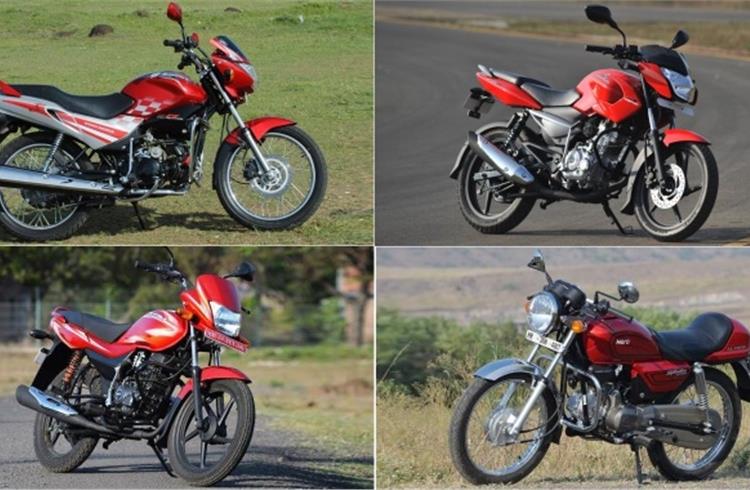 November 2016 saw the implementation of the government’s demonetisation scheme which had its impact on the Indian auto sector, with two-wheeler sales, particularly of commuter bikes in rural India, bearing the major brunt of the move.

Sales for the motorcycle segment in November went down by 10.21% to 778,178 units as rural India reported a sharp slowdown. Obviously, the Top 10 charts for the reported month saw some significant changes as certain models did create an upheaval.

The biggest drop in the Top 10 best-selling motorcycles for November was registered by Hero MotoCorp’s Passion series. The model, which regularly achieves a podium finish, fell to the seventh spot. This is the first time that the Passion series registered a place outside the Top 4. The last time it saw a fourth spot was in July 2016. The model, which sold 40,272 units in November, did not even manage to sell half of the units which it sold in October 2016 or November 2015.

Meanwhile, the Passion’s loss proved to be the Hero Glamour’s gain as the model leapfrogged to the third place, beating its segment rival Honda CB Shine in the process, which sold 45,236 units for the fourth place. It has been a seesaw battle between the Glamour and CB Shine, with each of them coming out on the top, only to lose their place again the following month.

Hero MotoCorp’s 125cc flagship motorcycle managed to achieve a podium finish for the first time since July 2016, when it occupied the third spot. The bike, which sold 53,301 units in November, is set to become Hero’s fourth brand to clock 10 lakh cumulative sales.

Talking to Autocar Professional, Ashok Bhasin, head - sales, marketing and customer care, Hero MotoCorp, remarked: “We have already launched a one-million mission for the Glamour, which is the fastest growing brand for us. We are growing at almost 29-30 percent (Glamour). It is on its way to becoming a million-plus brand soon.” 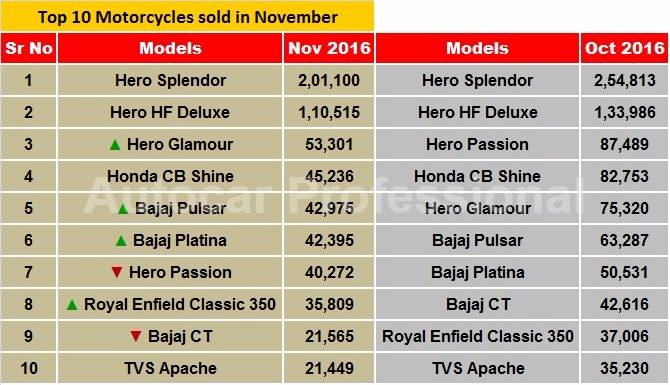 The fall of the Passion helped Bajaj Auto’s Pulsar and Platina motorcycles to move up one place each. The Pulsar series sold 42,975 units in November to take the fifth spot, while the Platina occupied the sixth place with 42,395 sales. This is also the first time the Pulsar brand has moved into the Top 5.

At the eighth place is Royal Enfield’s flagship motorcycle, the Classic 350, with sales of 35,809 units. The most popular Royal Enfield bike has moved a place higher compared to its ninth position in October 2016.

Meanwhile, Bajaj Auto has moved into Royal Enfield’s territory with the launch of the Dominar 400. On Decmeber  15. It will be interesting to see how things heat up in the midsize motorcycle category in the coming months.

Completing the Top 10 is TVS Motor Co’s Apache with sales of 21,449 units in the reported month.

Although December traditionally remains a lean month from sales perspective, it would be interesting to note how bike manufacturers will perform considering the year-end discounts and the digital benefits offered to customers in order to offset the impact of demonetisation.