​​​​​​​With wholesales of 12.25 million units in the first 9 months of FY2023, India Two-Wheeler Inc has seen 20% YoY growth; this trio of OEMs has recorded better growth than their rivals which is now reflecting in their increasing market share. 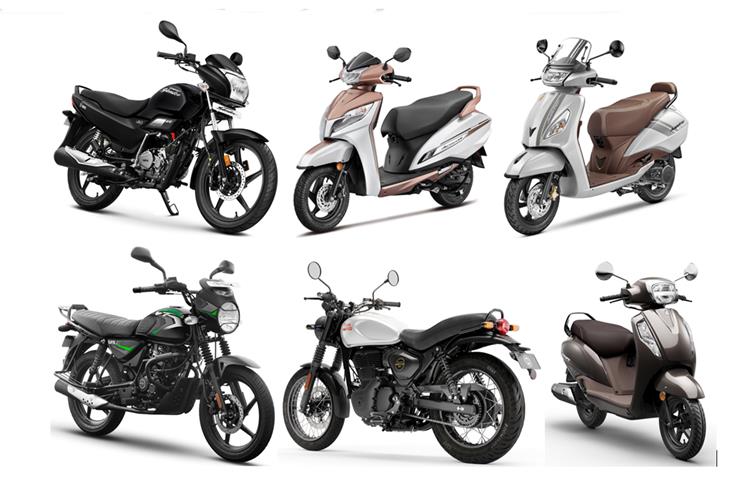 Blame the slower growth versus these above-mentioned previous fiscals on a cocktail of growth-impacting factors like inflationary pressures, increased cost of ownership due to higher fuel, insurance and new vehicle prices, and flagging demand from rural India, which is the biggest buyer of entry-level commuter two-wheelers.

Amidst this challenging scenario in a value-conscious market and given its massive volumes, the two-wheeler industry continues to be the bulwark of India Auto Inc. Of the 14 OEMs in the market and all of them members of apex industry body SIAM, only three have seen their sales decline YoY in the first nine months of FY2023. Most of the others have recorded strong double-digit growth albeit it remains to be seen if the growth can be sustained in 2023, given that prices are set to increase with the upcoming RDE norms this April. Here's looking at how the top seven OEMs fared.

Compared to a year ago, Hero MotoCorp’s combined bike and scooter market share has reduced to 32% from 34.75% a year ago.

Nearly 600,000 units behind the market leader is Honda Motorcycle & Scooter India (HMSI) but compared to the No. 1, the No. 2 is recording a better rate of growth, which has translated into a market share increase of two percentage points – to 27.10% from 25.13% a year ago. In the April-December 2022 period sold 764,367 units more than it did in the year-ago period, compared to Hero MotoCorp’s YoY increase of 383,669 units.

HMSI sold a total of 14,28,996 bikes, up 31%, which gives it a market share of 18% versus 16% a year ago. However, HMSI’s strength comes from its sheer dominance in the scooter market driven by its Activa range. The company has recorded sales of nearly 1.9 million scooters in the past nine months, growing 29% YoY and has a scooter market share of 47.51 down one percent from 48.65% a year ago. Put that down to a sluggish market as well as competition from the No. 3 player, TVS Motor Co.

TVS Motor Co has increased its overall two-wheeler industry market share to 15.65% from 14.82% in April-December 2021, up by nearly one percent, with sales of 1.91 million units. Its growth rate would have been higher if demand for mopeds – TVS is the sole IC engine moped OEM in India – had not seen a 9% decline.

Compared to Hero or Bajaj, TVS does not seem to have been majorly impacted by the tepid demand for entry level bikes. Its 99.7cc Sport, 109.7cc Star City Plus and Radeon together have sold 247,643 units, up xx% over the year-ago 231,595 units.

At No. 4 is Bajaj Auto with 13,90,698 units, which marks 7% YoY growth. Like Hero MotoCorp, Bajaj Auto too has been impacted by the slackened demand for entry level motorcycles and its single-digit growth means that its overall market share has dipped to 11.34% from 12.78% a year ago.

Bajaj’s sole scooter – the all-electric Chetak – sold 26,409 units, which gives the company a 0.66% share of the scooter market.

Along with TVS, Royal Enfield is the other Chennai-based OEM which is having a strong run in the market. With total sales of 542,818 units, the midsize motorcycle manufacturer has clocked strong 50% YoY growth, increasing its overall market share to 4.42% from 3.54%. Seen in the context of only bikes, RE’s share is now 6.83% compared to 5.31% a year ago.

Suzuki Motorcycle India is making good progress with its scooters, which have helped increase its overall market share marginally. Just 3,791 units behind Royal Enfield in the pecking order, Suzuki sold a total of 539,027 units (up 23%), comprising 522,972 scooters (up 24%) and 16,055 bikes (down 7%) . The Access 125 is the best-selling Suzuki product on two wheels.

A deep dive into the two-wheeler industry sales over the past six fiscals including the first nine months of FY2023 reveals interesting takeaways. The top four OEMs with sales in seven figures or million units – Hero MotoCorp, HMSI, TVS Motor Co and Bajaj Auto – together account for an overwhelming 86% of the market. All four are traditional ICE players, three of whom have diversified into EVs with Honda planning to do so in the future.

The next three OEMs – Royal Enfield, Suzuki and Yamaha – have sales in six figures and account for 12.46% which means the balance 1.52% of the market is left to seven much smaller players.

Of the seven leading manufacturers, Honda, TVS and Royal Enfield have made the maximum market share gains while Hero and Bajaj have seen their share decline. SIAM data reveals Honda, which had an overall share of 28.60% in FY2018 saw it decline to 25.58% in FY2021 but has regained growth and is currently running at 27.10%. This is thanks to Honda increasing its motorcycle market share by two percentage points to 18% even as its scooter share saw a 1% decline to 47.51% from 48.65% a year ago.

TVS Motor Co, which also straddles both the bike and scooter segments, has increased its overall industry share to 15.65% in April-December 2022, up from 15.20% a year ago. In FY2018, it had a share of 14.80% which came down to 13.84 in FY2019 but the company has since regained lost market share, thanks to its strong performance in the scooter market. Since FY2018, TVS’s scooter share has increased by five percentage points to 23.48%, which is about half of leader Honda.

Interestingly, TVS has also made gains in motorcycle market share which currently stands at 8.19%. It was 7.27% six years ago.

Royal Enfield is the third OEM with good market share gains. Riding on surging demand for midsize motorcycles in India, the company currently has an overall market share of 4.42% of the overall market and 6.83% in the bike market. With an eight-model portfolio and 25 variants, with engine capacity ranging from 346cc to 648cc, the company is capitalising on the consumer upgrade from executive commuter bikes to more powerful models.

Will the growth momentum sustain in 2023?

While the numbers for April-December 2022 indicate double-digit wholesales growth, the retail story continues to be one of slower growth and needs a sustained and also strong sales revival. Last month, apex dealer body FADA released retail sales numbers for CY2022. At 1,53,88,062 units for the 12-month period, two-wheeler sales did post a 13% increase over CY2021’s 1,35,73,682 units but remain considerably below CY2019’s 1,82,04,593 units. That’s a difference of 2,816,531 or 2.81 million units, or 234,710 units every month of the year. This sizeable gap can only be bridged if demand returns to the 100-110cc entry-level two-wheeler market, particularly from rural India which is the big buyer in this sub-segment. But with the bottom of the pyramid impacted by the economy, forecasting a sustained revival looks difficult.

Meanwhile, mirroring the trend in the passenger vehicle segment, demand remains strong in the executive and midsize motorcycle segment as also for 125cc scooters. With schools and colleges finally reopening and sustaining a study-at-campus regime, demand is back in the scooter segment in urban India. Those on daily office runs too are visiting showrooms to buy motorcycles in the 125cc to 150cc range that offer adequate punch for long-distance commuting whilst offering reasonable fuel economy, which is critical in a time of high petrol costs.

Meanwhile, the shift to electric mobility is also underway in this segment and electric two-wheeler sales are estimated at around 4% of total industry volume, which can only grow as OEMs introduce newer and improved products along with enhanced range.

Will the growth seen over the past few months sustain in the new year? Will demand return sustainably from rural India? Industry remains cautiously optimistic, fingers firmly crossed.