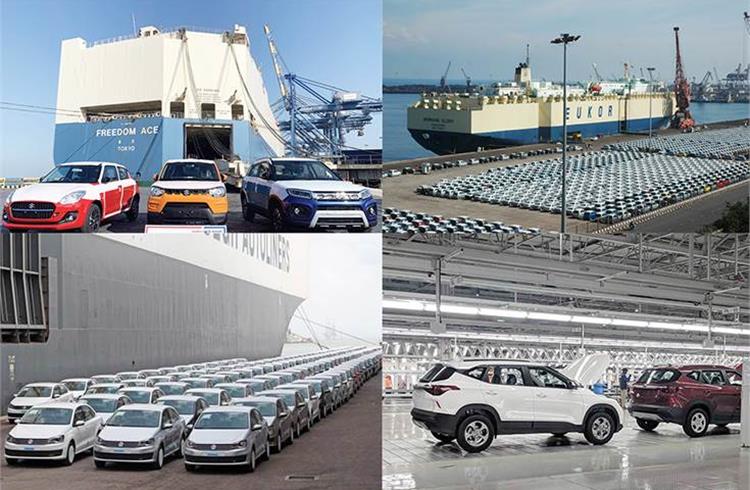 In a year overshadowed by supply constraints, and fuel price hikes, and an economy emerging from the Covid, domestic auto sales bore the brunt with sales at six-year lows but on the exports front, Auto India Inc had much to cheer. Exports for all segments rose by 37 percent with the CV segment leading the charge. 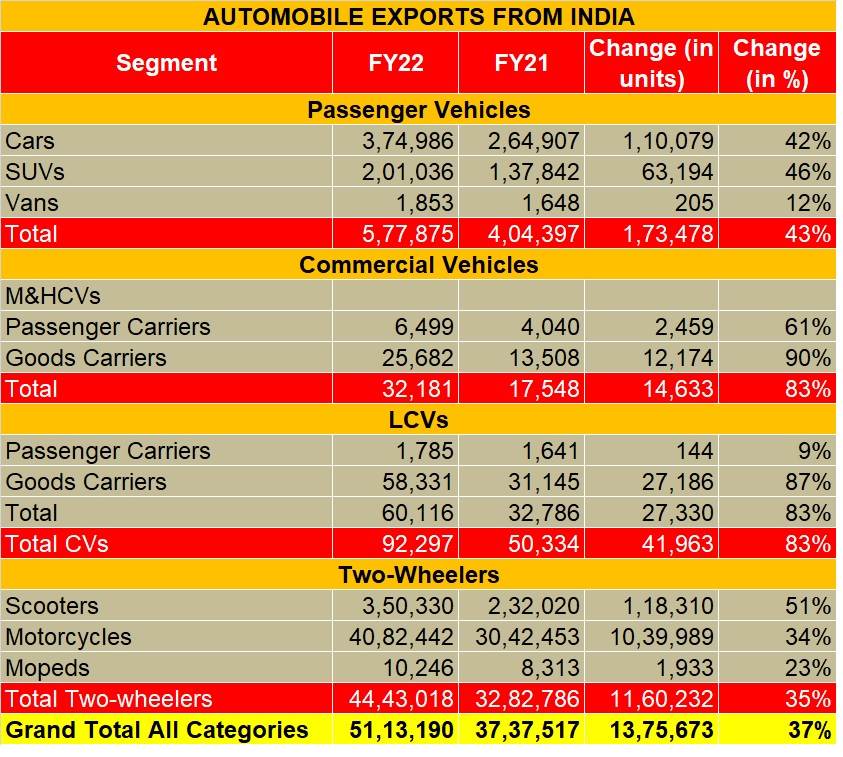 PVs and two-wheelers had their place in the sun with Maruti emerging as the lead player in cars exports and Bajaj Auto continuing to hold the No 1 export slot for both two- and three wheelers. SIAM President Kenichi Ayukawa said, “Two-wheelers achieved their highest ever exports. It is good to see that Indian products are becoming more acceptable worldwide for their quality, cost and performance.”

Two-wheelers shine
For the two-wheeler market battling muted retail sentiment and high ownership costs, the exports numbers helped offset the lower domestic tally.  In the fiscal gone by, exports rose 35 percent, almost as much as the total increase in exports across segments in FY22. Motorcycle exports raced ahead by 34 percent while scooters saw a 50 percent plus jump. In terms of numbers, 4,443,018 units went overseas as against 3,282,786 vehicles in FY21.

Bajaj Auto, which exports to over 70 countries shipped 2.1 million two-wheelers last fiscal, clocking a brisk 22 percent increase. TVS Motor too has been steadily increasing its exports share for both two- and three-wheelers with just over a million at 10,24,166 units exported, up 43 percent.

PV makers expand export portfolio
Among PVs, Maruti led the export tally as well, hitting record levels of 1,83,876 exports, which is a more than hundred percent increase on a year-on-year basis.

The company recorded a sharp uptick in FY22 UV sales at 50,821 vehicles Vs 9,595 exports in FY21. Overall, this is the highest ever export for the auto bellwether across fiscals. Its top exports models in FY22 included Baleno, Dzire, Swift, S-Presso and Brezza and the export destinations included ASEAN, Latin America, Middle East and Africa amongst the 100 plus countries it ships its products to.

Support from the parent Suzuki Motor Corp helped Maruti expand its export product portfolio, reaching out to more geographies and increasing the distribution network. Coping with the ongoing chips shortage in domestic market, the company focused on exports models where the chips availability was not so much of a constraint.

For Hyundai too it was a picture of a contrast between domestic sales and export performance. While domestic sales were more or less flat with some erosion in market share, exports clocked a healthy 19 percent upmove. The Creta is amongst the most exported Hyundai models manufactured in India and plays a critical role in the Korean carmaker’s global SUV strategy. Overall, Hyundai’s total UV exports stand at 40,759 vehicles, up a tad short of 40 percent on a year-on-year basis. The company’s overall export numbers were in the region of 130,000 units.

Hyundai’s Korean sibling, Kia too showcased a strong showing in the exports arena with 26 percent increase in annual SUV exports. While its cumulative exports crossed the 100,000-vehicle mark earlier in the year, for FY22 alone its exports came in well over 50,000 vehicles. No prizes for guessing that the Seltos and Sonet, exported to over 90 countries, were the showstoppers.

The other standout OEM was Volkswagen with a healthy 29 percent increase. With Skoda planning a bigger global role for the Indian manufacturing facility and the VW group deciding to give the lead role to Skoda in the India 2.0 initiative because of the “cost-efficient and functional vehicles,” the group is progressing steadily with its strategy to enhance its export footprint.

Renault too has been making steady progress in its exports tally with its made-in-India product portfolio crossing the one lakh mark cumulatively in exports, earlier in January. The Kwid, Triber and Kiger are amongst the lead performers exported to 14 countries globally. East Africa, South Africa, APac and SAARC nations are amongst the leading export destinations. Both Renault and Nissan sold close to 60,000 units abroad with Nissan accounting for two-thirds.,

FY23 outlook
In his remarks, Ayukawa said the exports indicate a greater acceptability of made-in-India products. More importantly, it did play a key role in cushioning the rather weak showing in the domestic market in the fiscal gone by. Overall, the coming fiscal will have its share of uncertainties, especially with the Ukraine war which is impacting supplies of precious metals and the fuel price hikes. Geo-political tension, the severe economic crisis in Sri Lanka and the continued headwinds in terms of raw material shortage will remain as areas of concern. As the auto makers prepare to future proof business from challenges going forward, it would be interesting to see how exports pan out going forward.