Thanks to momentum provided by new models like the CT100 and new Avengers, Bajaj Auto saw growth in domestic sales covering up for declining exports in 2015-16. 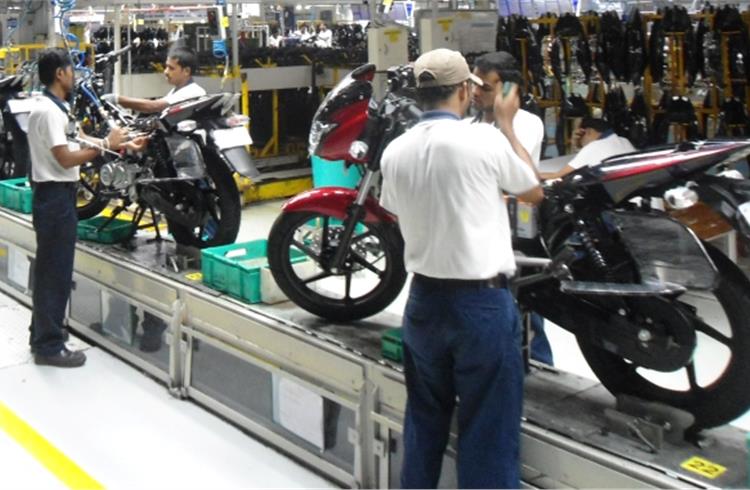 FY2015-16 was a good year for Bajaj Auto in the context of its annual domestic sales results. The company, which banks more on its exports to keep up its 20 percent EBIDTA margins, saw domestic sales bailing it out from reporting an overall decline in its total annual sales.

SIAM industry sales data reveals the company, which ranks fourth in the domestic market but is the largest exporter of motorcycles (or two-wheelers) from India, registered total domestic sales of 18,98,957 units, a YoY growth of 7.24 percent.

However, the company recorded a decline of 4.08 percent YoY in its motorcycle exports due to low demand from key markets such as Nigeria, Egypt and other economies that typically depend on oil revenues. Bajaj Auto’s total exports for the last fiscal stood at 14,59,295 units.

Interestingly, the share of motorcycle exports in overall bike sales for Bajaj Auto stood at 43.45 percent and 46.21 percent in FY2015-16 and FY2014-15 respectively. It can be seen that the share of exports for the last fiscal dropped due to a decline in shipments to foreign shores. 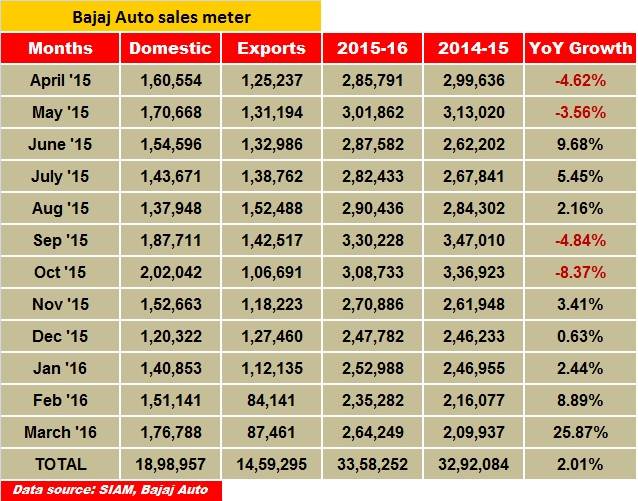 Gunning for the 2 million mark

On the domestic front, industry analysts say that if Bajaj Auto continues to launch models that could garner volumes in the market, the company may achieve the sales mark of two million units during FY2016-17.

For the last fiscal, new models such as the CT100, Platina 100 ES, new 150cc and 220cc Avenger variants, Pulsar RS200, Pulsar AS 200 and AS 150 have successfully gathered sales momentum for the company. In terms of yearly sales, Bajaj Auto’s most affordable offering, the 100cc mass commuter motorcycle CT100 added volumes of more than 550,000 units during the last fiscal.

The company also sold around 270,000 units of the fuel efficient Platina 100 ES. While the Avenger range added at least 175,000 units, the Pulsar models provided the buffer at the top end of all products in the domestic market.

At the premium end, KTM models have also registered stable growth in their yearly sales. As the company is gearing up with a number of new models in its pipeline, FY2016-17 should be a better fiscal for Bajaj Auto as well as for the industry as a whole. Meanwhile, the company is betting big on its latest offering, the 150cc V15 model, which offers an unconventional design language apart from many other regular features in the commuter motorcycle segment.