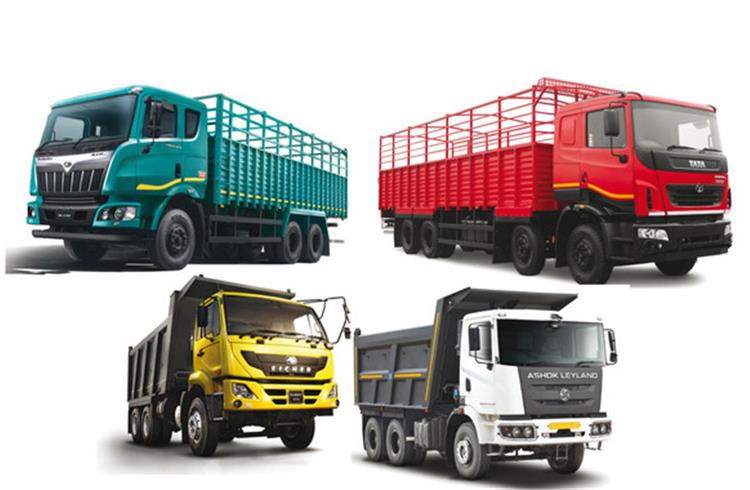 India's commercial vehicle sector continues to maintain its strong momentum for the second month in a row in the current fiscal. Sales numbers announced by some OEMs for May 2018 indicate strong demand for trucks in the M&HCV segment.

The growth has come on the back of overall buoyancy in the economy, higher spending by the government in infrastructure development, road construction, increase in the number of irrigation facilities and housing projects across the country, thus resulting in strong demand for M&HCVs and tippers.

All the OEMs, including Tata Motors, Ashok Leyland, VE Commercial Vehicles and Mahindra & Mahindra have recorded strong M&HCV sales in the month. However, it is to be noted that manufacturers are benefiting from last year’s low base, when BS IV emission norms had come into effect and the sales were impacted significantly in the first quarter of FY18.

After last year’s superior growth, where the overall CV industry grew by nearly 20 percent, industry analysts were anticipating the upward trend on the basis of higher infrastructure spend, growing e-commerce segments, increasing last-mile connectivity and rising mobility needs in the rural area. The demand for used vehicles rose alongside the newer ones, in spite of the lesser number of higher tonnage vehicles in the used market segment.

Earlier this month, rating agency ICRA said, “The industry has been gradually witnessing a greater preference for higher-tonnage trucks over the past decade; the demand has gradually shifted from 16T to 25T and is further shifting in favour of 31T and 37T trucks.”

In particular, the 37T segment witnessed a sharp jump in sales, due to increasing preference for higher-tonnage trucks. Capacity addition (in tonnage terms) in the system outpaced volume growth and grew by 30 percent as compared to a 19 percent increase in M&HCV (Truck) sales in FY2018. The share of the 35T and above segment increased to 63 percent in FY2018 from 19 percent (FY2013) and the average tonnage of the trucks in India has improved considerably from 15T in FY2009 to 20T during FY2018.

According to ICRA, the trend for higher tonnage trucks has been supported primarily by their superior economic model, improving road infrastructure, a dearth of experienced drivers and stricter implementation of overloading norms. As vehicle's tonnage increases, the profit from the trucking industry also improves, especially over longer distances as the cost of operations is not directly proportional to vehicle's payload or revenue generation.

For instance, ICRA says that the cost of operating a 35T is approximately 35 percent lower, compared to a 16T truck when compared on a cost/per ton/per km basis. After GST kicked in last July, the trend towards consolidation has already begun across most of the consumer-oriented sectors like FMCG, consumer durables, pharmaceuticals, building materials and other allied sectors. This trend is likely to drive up the sales of heavy-duty trucks.  The consolidation of warehouses would also provide a further fillip to HCV sales as it is expected to lead to higher amounts of goods to be moved between manufacturing locations and warehouses, which will again lead to increased demand for higher tonnage vehicles.

According to Tata Motors, “This growth has been led by the government’s focus on infrastructure development, road construction, building of irrigation facilities and housing projects across the country. Additionally, sectors like auto carriers, 3PL players, cement, steel and oil tankers are also driving the growth in the economy. The SCR technology that was introduced in M&HCV trucks last year had gained customer confidence and continued to establish its TCO superiority.”

The I&LCV truck segment registered major growth with sales of 4,106 units, up by 73 percent over May 2017 figures. This growth is attributed to the new product launches, penetration of e-commerce and increased rural consumption. As per the company, the recently launched Tata Ultra range of ILCV trucks is gaining significant acceptance and is contributing to the volume growth.

The SCV cargo and pickup segment maintained its growth momentum with the sales of 15,567 units, up by 47percent over May 2017. With the growth in e-commerce sector and the hub-spoke model continuously evolving, the small commercial vehicles are in demand for the last mile connectivity needs across the rural and urban markets. The newly launched Tata Ace Gold has been well received in the market and is seeing strong demand. The commercial passenger carrier segment posted a growth of 14 percent after selling 4,709 units in May 2018. The onset of the annual school season also led to robust demand for school buses. 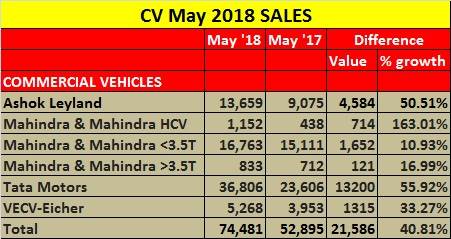