Navratri and Dussehra festivals, marginally improving consumer sentiment and a gaggle of new launches give passenger vehicle OEMs the sales movement they were awaiting since long. 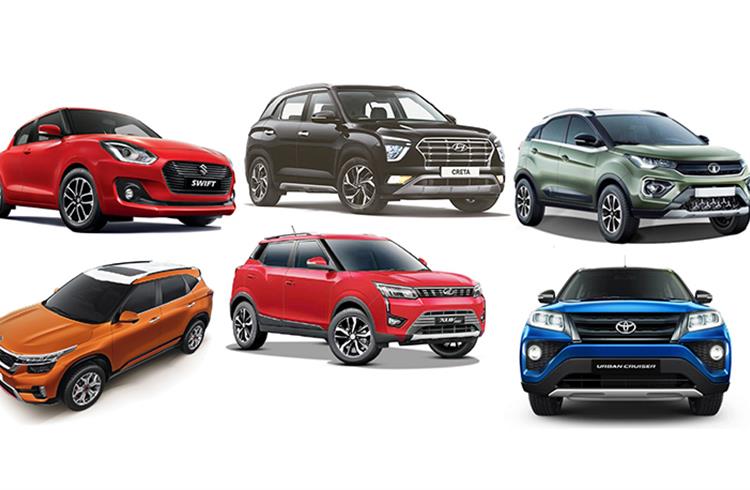 After witnessing a dull stretch for the predominant part of the apparently jinxed calendar year – 2020 – passenger vehicle manufacturers finally saw some robust growth last month on the back of healthy demand in the market. However, it is to be noted that these numbers are essentially despatches from OEMs to their dealers.

Driven by the festive cheer around Navratri, Dussehra and Eid in October as well as the upcoming mega festival of Diwali on November 14, carmakers have reported significant despatches to their dealers all across the country, who are witnessing good offtake of new cars from their showrooms.

What also seems to have helped is the strategic action of some car manufacturers such as Kia Motors India and Toyota Kirloskar Motor – to have launched brand-new products – right before the start of the festival extravaganza, which although subdued, is certainly bringing a positive mood to the automotive market amidst the persistent tension of the Covid-19 pandemic.

The country’s largest carmaker Maruti Suzuki India led the pack with a 17.6 percent uptick and strong demand for compact hatchbacks and a compact sedan model, while Kia Motors India and Tata Motors continued to majorly ride the wave of UV demand in the market with their products – Kia Seltos, Sonet and Tata Nexon, respectively. At the same time, Korean major Hyundai Motor achieved its highest-ever monthly sales in a drab market environment, giving confidence to the industry in general about driving towards business recovery.

Let’s take a manufacturer-wise look at how OEMs performed in October:

The two vans Omni and Eeco too registered a notable 33 percent growth with sales touching 13,309 units last month compared to 10,011 units in October 2019.

Hyundai Motor India: 56,605 units (8.85%)
India’s No. 2 carmaker by sales volumes, Hyundai registered its highest-ever domestic market monthly sales of 56,605 units (October 2019: 50,010). Hyundai’s previous best was 52,001 units in October 2018. While the Korean carmaker has not shared details of the model-wise sales, it can be gleaned that the biggest contributors to the October 2020 total would be the new Creta, the current SUV market leader and the Venue compact SUV, both benefiting from the boom in SUV sales.

Sustained demand for the midsized Hyundai Creta SUV, which was launched just before the lock-down in March and still managed to pull buyers into showrooms even in a nervous market environment to clock 115,000 bookings within six months, is one of the top reasons for Hyundai’s strong performance, which is also its best-ever with respect to monthly sales numbers.

What has also added to the numbers are the despatches of the all-new third-generation Hyundai i20 premium hatchback, which has been unveiled and is now set to be officially introduced into the market on November 5.The car will give competition to arch rival Maruti Suzuki Baleno and in its latest avatar, is coming loaded with a host of feel-good features including a sunroof, Bose premium audio system and six airbags for safety.

Commenting on the October sales performance, Tarun Garg, Director (Sales, Marketing & Service), Hyundai Motor India said, “The October month sales performance has set a positive tone for overall business environment and we are confident that Hyundai will continue to strongly contribute towards sustainable growth of economy, community and all its stake holders.”

Tata Motors: 23,617 units (79.33%)
The home-grown carmaker sold a total of 23,617 units (October 2019: 13,169) last month, which constitutes 79% year-on-year growth. This is clearly driven by robust demand for its face-lifted Tata Nexon compact crossover, as well as Altroz premium hatchback. The company is also seeing demand picking up for the midsized Harrier SUV after getting introduced with an automatic transmission option in its latest facelifted avatar earlier this year in March.

The Seltos midsized SUV went home to 8,900 buyers while the newly-launched Sonet compact crossover which has already garnered 50,000 bookings since launch in September, reached 11,721 customers. With the healthy order book in hand, Kia Motors India is mulling starting third-shift operations at its plant in Anantapur.

According to Kookhyun Shim, MD and CEO, Kia Motors India, “We are witnessing a strong surge in customer demand from across the markets, and we're confident that it will grow even further with the onset of the festive season. It is good to see the numbers rebounding with the market slowly coming back on track as the customers are going ahead with their long-held purchases. We are extremely happy with the way we have performed in the past couple of months and are confident of continuing this success beyond Diwali as well. Keeping this in mind, we are now considering to start the third shift in our plant to meet the rapidly growing demand for our products in India.”

Mahindra & Mahindra: 18,622 units (1%)
Mahindra & Mahindra despatched a total of 18,622 vehicles in October 2020, a marginal growth of 1 percent over October 2019 (18,460). These included 18,622 utility vehicles. According to Veejay Nakra, Chief Executive Officer,M&M, “We are happy to achieve a growth of 4% in Utility Vehicles, despite certain supply constraints. Our brands Scorpio, Bolero and XUV300 continue to do well, while the bookings for the new Thar has set new records within just a month of its launch. For Mahindra, the festive season has started on a positive note with deliveries and bookings being higher than last year. Going forward, this augurs well for a robust festive demand which in turn will help the industry in the short term.”

Commenting on the month’s performance, Naveen Soni, senior vice-president, Sales and Service- TKM said, “The month of October has been our best month so far since March 2020. The festive season has proved to be bullish as we witness demand surging, month on month. This has been true of our retails too as order flow has been smooth, from the very beginning.

Honda Cars India: 10,836 units (8.25%)
The Japanese carmaker clocked 10,836 units last month (October 2019: 10,010 / +8.25%). While the growth is marginal, the carmaker says it is as per plans. According to Rajesh Goel, SVP and director, Marketing and Sales, Honda Cars India, “We have seen positive sales momentum in line with market sentiment and our October results have been as per our plan.”

"The festive buying picked up from Navratra in mid-October and we are focusing on maximising deliveries during this period. Thanks to our strong and refreshed product line up introduced right before the festive season and ongoing multiple consumer offers, we expect this demand to continue through to Diwali which will further accentuate growth for us and the industry at large, Goel added.

The company had launched the fifth-generation Honda City – its best-selling model in India – earlier this year in July. While the midsized sedan has its loyal customer base who value its comfort, powertrain and design attributes, the market, however, is witnessing a distinctive shift towards SUVs. The new City is perhaps facing rough waters from the competition including Hyundai's Creta and Kia's Seltos crossovers which play in the same price bracket.

As a result, Honda was doling attractive schemes, including offering a Rs 30,000 exchange bonus on the latest City in October. The Civic executive sedan was also running massive discounts of up to Rs 250,000 while the Amaze offered Rs 47,000 in benefits. The Jazz and WR-V, on the other hand, too offered Rs 40,000 worth of benefits each last month. With Diwali and Dhanteras lined up for November, expect the schemes to continue through to the end of this month as well.

Growth outlook
So, with the festive season bringing some respite for the industry and offering a glimmer of hope for the much-needed recovery of the entire sector as well as the Indian  economy, it would be worth the wait to see how things unfold after November. While November will surely bring in the goodies that OEMs seek, the on-ground market reality is what will determine whether the demand is really here to sustain itself through to most of 2021. We will keep a close tab on the progress, as we are sure OEMs will too. Stay tuned in to Autocar Professional, India's leading automotive B2B title.