With global markets having opened, Indian OEMs post strong numbers but the semiconductor shortage could prove to be a spoilsport. 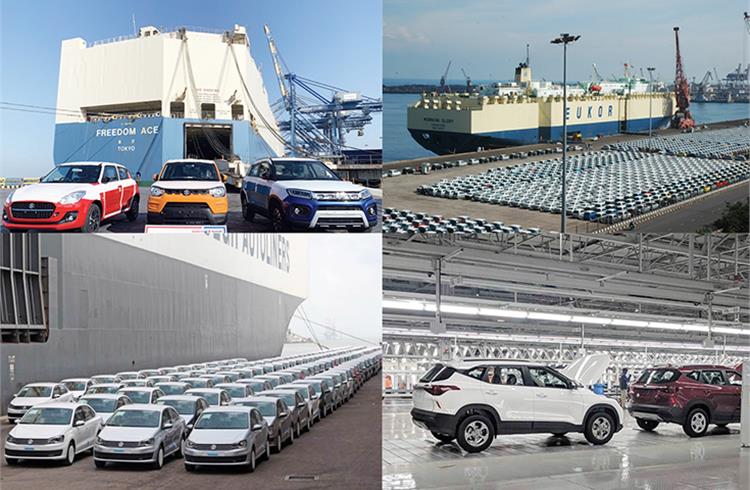 In what is a good indicator of demand for made-in-India passenger vehicles and also marking the opening of global markets, PV exports have risen by 131% year on year in the April-July 2021 period. A total of 179,434 units were shipped overseas in the first four months of FY2022 (April-July 2020: 77,802).

The export mantra per se remains a winner: not only is it a high-margin revenue earner but it keeps the manufacturing plant buzzing even in stressful times in the domestic market. Here’s looking at the top performers in the fiscal year to date. 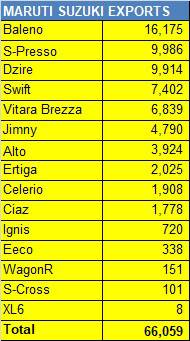 No. 2 Hyundai Motor India: 42,088 units
Hyundai Motor India, which wrested the No. 1 made-in-India passenger vehicle (PV) exporter title from Ford India in FY2020, and also took the title in FY2021, is at second position in the PV export rankings. 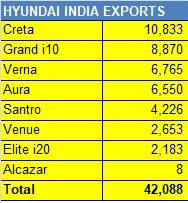 No. 4: Kia India – 15,641 units
Kia, which is on a roll in India and recently drove past the 300,000 units sales milestone in a scant 24 months, is in fourth place with 15,641 units, maintaining the rank it had in FY2021. The Seltos, its best-seller in India, is also its No. 1 export model with 9,385 units, comprising 60% of total export sales in the year to date. This also mirrors its performance in Indiam, where the Seltos accounts for 66% of total Kia sales in the country.

No. 6: Nissan Motor India – 11,821 units
With 11,821 units exported, Nissan is one rank down from its fifth position in FY2021. The export-only Sunny sedan leads the number tally for the Japanese carmaker with 8,908 units with the recently launched Magnite compact SUV next up with 2,016 units. 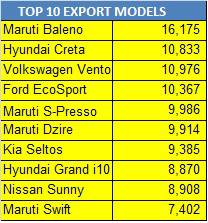 Will semiconductor shortage chip away export numbers?
With global markets having opened up, the 131% YoY growth in April-July 2021, albeit on a lower pandemic-impacted FY2020, augurs well for the future. Some OEMs have ramped up production to both ready themselves for the upcoming festive season as well as cater to the high-margin export market.

Expect the export battle between Maruti Suzuki and Hyundai to continue well into this fiscal. Hyundai has begun exporting the recently launched six- and seven-seater Alcazar SUV and

Sibling Kia will be looking to enhance overseas demand for the Sonet for which its Anantapur plant is the sole global production base. Then there’s Skoda Auto Volkswagen India will also look to export the recently launched Kushaq and the upcoming Taigun SUVs, while catering to the domestic market. Meanwhile, both Nissan India and Renault India are seeing decent export traction from the Magnite, Kiger and Triber SUVs.

If there is a challenge looming for Indian automakers’ exports, then it is the global semiconductor crisis which has affected most OEMs be it Maruti Suzuki, Mahindra & Mahindra or Tata Motors. Earlier this month, Maruti Suzuki said that production at its contract manufacturing plant in Gujarat will be partially impacted in August as a result of the semiconductor shortage. It had outlined no production on August 7, 14 and 21 and some of the production lines may see temporary cut to one shift instead of two.

Poor supplies of semiconductors – a crucial component which silently power modern infotainment systems, driver aids and multiple electrical components – have been affecting companies for over a year now. The problem stems from the hugely increased demand for personal computers, tablets and smartphones at the height of the Covid-19 pandemic, which largely diverted supply away from the automotive sector.

A passenger vehicle typically uses around 1,000 semiconductors and any slowdown in the supply chain means manufacturing operations can come to a grinding halt. Also, like many countries, India too has an over-reliance on the world’s biggest supplier of microprocessors – Taiwan.

At present, it looks to be tough call for OEMs, who will, depending upon the state of their semiconductor stocks, be rejigging their production schedules to ensure the flow of high-in-demand model both to the domestic market, readying dealer inventory for the upcoming festive season and, importantly, ensuring deliveries of high-margin export models. Who said automotive was an easy business? 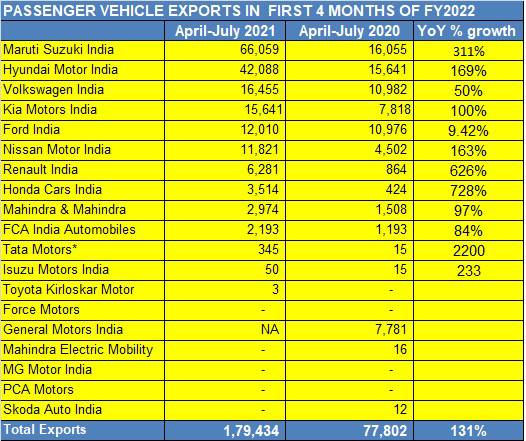