The Indian automobile industry seems to be in a jovial mood and looks to prolong the positive trend it reflected in CY2017 for the remaining part of the ongoing fiscal, in CY2018 as well. 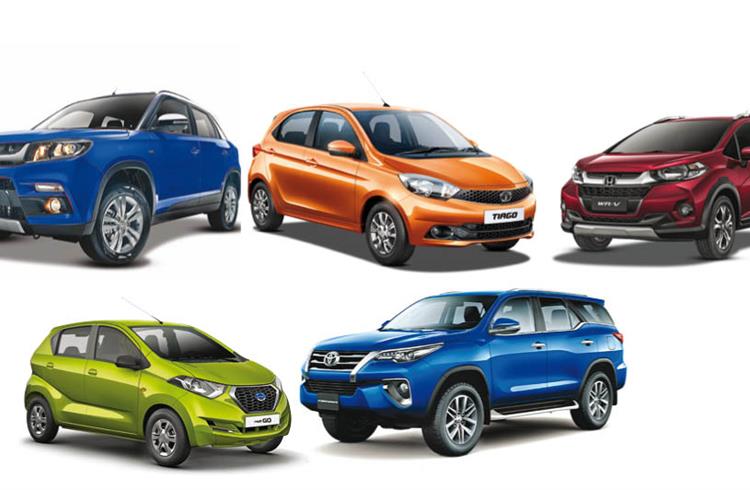 Since morning today, key manufacturers in the passenger vehicle segment started rolling out their performance figures for the first month of the new calendar, and given the industry's momentum, most numbers in black have only validated SIAM's step to have revised the segment's growth outlook for FY2018, which now stands at 9 percent by end of March, which was hovering between 7-9 percent until the end of last year. Here's a look at how some of the major companies fared in their vehicle sales in January 2018.

The entry level duo of the Alto and Wagon R hatchbacks sold a total of 33,316 units last month, down 12.2 percent, indicating demand is shifting to other company models. Acting as a strong buffer is the quintet of compact cars (Swift, Celerio, Ignis, Baleno and Dzire) and utility vehicles (Gypsy, Ertiga, S-Cross and Vitara Brezza) which continue to beef up overall numbers.

Hyundai Motor India
Being the second largest car manufacturer in the country, Hyundai registered total domestic sales of 45,508 units (January 2017: 42,017), up 8.3 percent. The company has been witnessing consistent demand for its new Verna sedan, which was launched in August last year. The car has cumulatively sold 23,650 units in a span of less than five months until December 2017. Moreover, the i20 hatchback and the Creta crossover continue to be strong buyer considerations in their respective vehicle categories.

According to Rakesh Srivastava, director, Sales and Marketing, Hyundai Motor India, “2018 has started on a positive note and promises progressive growth for the industry, with Hyundai volume growth of 8.3 percent on strong performance of Grand i10, Elite i20, Creta and the next-generation Verna meeting customer aspirations on improved buying potential, led by stable micro economic factors.”

Commenting on the monthly performance, Rajan Wadhera, president, Automotive Sector, M&M, said, “We are happy to have begun the calendar year with an overall healthy growth of 32 percent (across PVs and CVs). The growth in the M&HCV segment lends credence to the positive momentum in the economy, which can be seen even in the growth numbers of our SCV portfolio. We believe this momentum will continue in our Q4FY2018 numbers. The upcoming Auto Expo will allow Mahindra to display a slew of exciting products and mobility solutions in keeping with automotive trends such as shared mobility and last mile connectivity.”

Tata Motors
Tata Motors clocked domestic PV sales of 20,055 units (January 2017: 12,907), surging ahead at a significant 55 percent growth rate. What boosted the company's sales is the good demand for the recently introduced Nexon compact crossover, launched in September 2017, which has emerged in the voluminous sub-10 lakh rupee UV price segment. Driven primarily by the Nexon, Tata’s UV sales grew by a tremendous 188 percent, and the sales of its passenger cars, driven by the Tiago hatchback, registered a 27 percent growth in the month.

With an aim to become a permanent placeholder in the Top 3 players in the country, the homegrown manufacturer is all set to showcase its new range of products - one in the premium hatchback category, codenamed the X451, a new sedan, and a new full-size SUV based on the Land Rover Discovery, as well. The new products target to broaden Tata's footprint across various vehicle segments in the market in the near future.

According to Mayank Pareek, president, Passenger Vehicles Business Unit, Tata Motors, “We are happy to report that our strong sales performance continues in January 2018 and we have started 2018 with determination. This month, we have grown by 55 percent over last January, on the back of good demand for our new generation products – Tiago, Tigor, Nexon and Hexa.  While Tiago continues to lead the growth in cars at 27%, the Nexon and HEXA have attracted new set of SUV buyers, resulting in 188 percent growth in UVs. We continue to be optimistic and hope this growth momentum continues.”

Commenting on the sales performance, N Raja, deputy managing director, Toyota Kirloskar Motor, said, “It is a delight to usher in the new year with double-digit growth. We are happy to have sustained the positive growth momentum post GST.  The customer demand has consistently been strong and we have catered to the growing customer demand.”

The success story of Innova Crysta and Fortuner sales growth continues to the new year. Customers continue to highly appreciate both the products and we are pushing our production capacity to fulfill the strong demand in the market. The Corolla retains its position as the segment leader with overwhelming performance in the month of January.”

“We are looking forward to the upcoming Auto Expo 2018 to showcase our premium new launch, facelifts and concepts with a show-stopping reveal and many more distinctive displays under the thematic banner of ‘Driven by a Better Future’,” he added.

“We hope the Union Budget 2018 brings in more growth-oriented measures to promote growth of the auto industry. The government should aim at a more long-term policy so as to lower the effect of Budget tinkering and bring long-term stability.  Considering the critical issue of environment pollution, we hope the government relaxes the tax rate in favour of clean and green technologies such as strong hybrids similar to the pre-GST era”.

With the Auto Expo getting started next week, the entire industry and the customers are excited and anxious about the slew of new products and technologies, which would be unveiled at the extravaganza. The product showcase and some new launches planned at the expo can certainly be expected to make some noise and drive people decisions in the months to follow. Stay tuned for more action in this space.

Yoichiro Ueno, president and CEO, Honda Cars India, said, “HCIL has witnessed strong growth of 17 percent in the ongoing fiscal year and we expect the market to further pick up after the anticipations regarding Union Budget are stabilised. HCIL will showcase our strong line-up for the next fiscal at the upcoming Auto Expo which will further strengthen our position in the Indian market.”

“With a major push given to the rural economy and significant investment in the infrastructure development under the Union Budget 2018, the outlook for automotive sector looks optimistic. This should further boost the sales volume marking a fruitful year for the manufacturers.”