The Bengaluru-based start-up claims that the Veer EV’s battery has a life of more than 10 lakh kilometres. 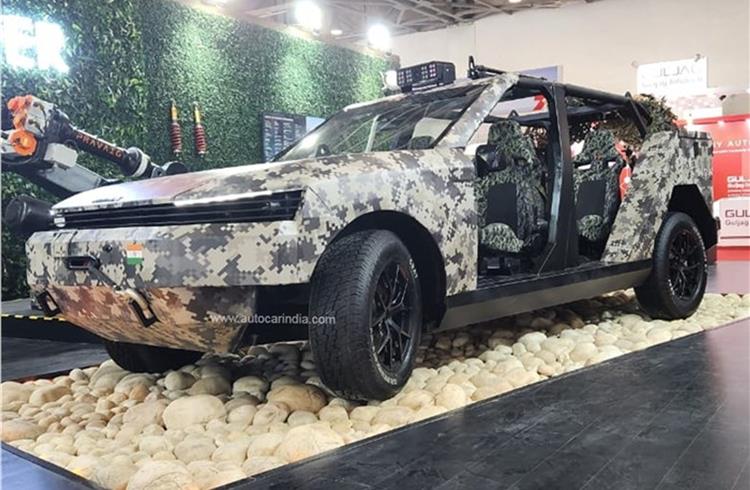 Pravaig has showcased the Veer EV, which is aimed for use by the armed forces. The EV was first showcased during the launch of Praviag Defy in November. The Bengaluru-based start-up claims that the Veer EV’s battery has a life of more than 10 lakh kilometres.

Exterior
Based on the Defy SUV, the Veer has a bare-bones structure and comes with only essential items such as a rollbar, bonnet, fenders and boot as standard. The Veer does not feature any doors for easier ingress and egress for soldiers. However, Pravaig says it can also be configured to have a closed-cab design.

The Veer EV also features a thermal imaging sensor, airlift hooks, a four-tonne winch, a two-tonne tow hitch, an IP 65-rated storage for equipment and gear as well as a mount for weapons or equipment. The Veer also gets run-flat tyres.

Interior and features
Inside, the Veer EV features a minimalistic design and only gets a centrally mounted touchscreen for all the controls. Pravaig claims that the military can customise and configure the interior layout of the Veer as per their requirements.

Despite this basic interior and exterior layout, the Veer comes equipped with six airbags. It also gets a tyre pressure monitoring system, a 360-degree camera with 12 ultra-sonic sensors, adaptive LED headlights and a 77GHz radar. Closed-cab Veers can also be equipped with a HEPA air filter. All of these features are powered by a MultiVAC computer system.

Powertrain and dimensions
The Veer is powered by a dual-motor set-up that sends power to all four wheels. Combined, the permanent magnet synchronous motors produce 408hp and 620Nm of torque. It can do a 0-100kph run in 4.9sec (claimed) and achieve a top speed of 210kph (claimed).

It has a 90.9kWh lithium-ion battery with a claimed range of more than 500km. Pravaig claims the battery can last for more than 10 lakh km and can be charged from 0-80 percent in 30 minutes.