OEMs go all out to woo SUV buyers

A host of new offerings starting with Toyota’s Hyryder and backed up innovative marketing campaigns will hit the market before the festive season. 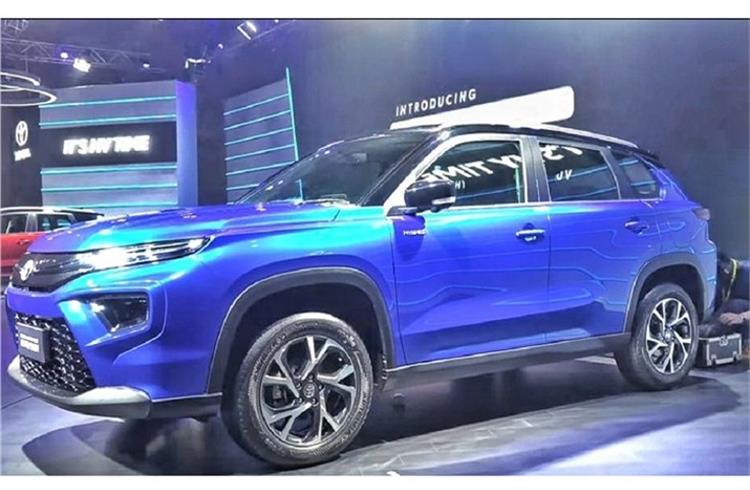 Automakers are pitching their upcoming offerings to car buyers with marketing plans that use innovative key words and messaging such as ’Hot n Techy’ in case of the Brezza or ‘Big Daddy’, the tagline for Mahindra’s new Scorpio-N, to showcase their product USPs in a competitive SUV market. The SUV segment is expected to see as many as 12 SUVs break cover, twice as many as the offerings in previous fiscals.

Toyota today unveiled the Hyryder, (pictured above),  a Suzuki-designed SUV that will be made at its Bidadi plant, and later this month, the Hyundai Tucson and Citroën C3 will make their debut on 13th and 20th July respectively. This flurry of new models is aimed at the festive season which starts from September. OEMs are banking on rains, already predicted to be good this year, to lift consumer sentiments and are hoping that fuel prices, already high, do not shoot up even more.

Some of the other models expected to debut include the Mahindra Bolero Neo Plus, Hyundai Casper in micro-SUV category, Volvo XC Recharge in premium E SUV category as well as the Jeep Grand Cherokee and Hyundai IONIQ electric SUV.

Amongst all these launches, the big litmus test may well be Maruti’s “hot n techy Brezza that still sells around 10,000 units per month with which it hopes to increase its presence where competition has already made big inroads. Shashank Shrivastava, Executive Director, Marketing & Sales at the Brezza this week said “there are gaps in our product portfolio which we plan to add by introducing new SUVs shortly" he indicated

The new Brezza launched after a three-year gap with a new powertrain is based on the existing Global-C platform and comes with refreshed exteriors and new interior design. It has already got 45,000+ bookings. Srivastava said it will “have a waiting period with the high bookings we have received”. Maruti will hope that the new Brezza will help it shore up its market share which has slipped from 51.22 percent in FY19 to 43.38 percent in FY22. The Brezza will be up against rivals including the Tata Nexon which has upped its presence in sub-4 meter SUV segment followed by the Hyundai Venue, Kia Sonet, Nissan Magnite and Renault Kiger at the lower end.

Toyota’s Urban Cruiser Hyryder SUV is being pitched as the country’s ‘All Wheel drive’ and “strong hybrid” combination SUV with a 1.5 litre hybrid powertrain that is expected to go on sale from the end of August 2022. The offering will be based on a Maruti-sourced 1.5-litre K15C dual-jet with mild hybrid tech and Toyota’s 1.5L petrol with strong hybrid tech.

The launch of the Hyryder is part of the deepening of the 2017 Toyota Motor Corporation and Suzuki Motor business alliance which started with two Maruti models – the Baleno and Brezza – being badge-engineered as Toyota. The four+ metre SUVs will take on the Hyundai Creta, Kia Seltos, and VW Group siblings, Kushaq and Taigun, and the newly-launched Scorpio-N whose automatic line-up prices will be announced at the end of this month.

The rising share of SUVs in the PV segment mirrors the trend in international markets, indicating a clear shift in consumer preferences.  SUVs reached a record market share of 45.5 percent in Europe last year, closing the gap on the 52.3 percent recorded in the US. Meanwhile, SUV sales accounted for almost 48 percent of the passenger car market in China.